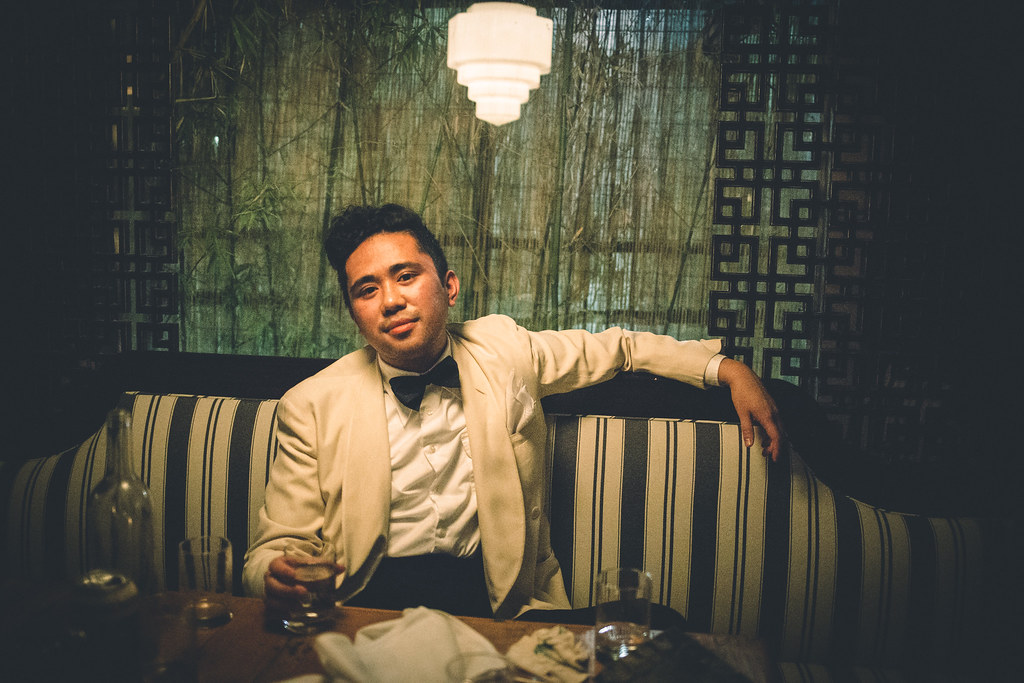 I don’t go out drinking often (if at all), but when I do, it’s with people who like vintage fashion.

If you know me well, you’ll know that I’ve never really stepped foot in a bar.  Drinking hasn’t been a big part of my life (my friends in college never did it) so the occasion never really arose.  Until this past weekend that is.

I received a facebook invite from one of my vintage friends which was for a Casablanca themed event at Hollywood’s latest bar: LONO.   Located on the every-busy Hollywood Boulevard Walk of Fame, LONO is a tiki themed establishment which features a restaurant, two bars, and a lounge area for events and live performances.  The event in question was done by the Art Deco Society of California, who tend to do stuff like this every once in awhile.  For the collaboration, they screened Casablanca in the lounge area and encouraged everyone to dress like they were attending Rick’s Café Américan in 1941.   With no cover charge and new fashion-friends, we decided to actually do something on a Friday night (like normal people).

There were a lot of people at LONO (both dressed up and not) and I didn’t know 90% of them.  That’s mainly because I’m a young person and the vintage scene and Art Deco Society have been around long before I started buying clothes on eBay!  Plus I believe that my group were the only people under 25 at the event, at least in regards to vintage clothing.  Obviously there were a few young people who had no doubt heard of the event through other channels and came dressed up, but not in vintage/classic menswear.  Unlike the Bloke or the Dapper Day Expo, the event wasn’t fashion centered; it’s just a cool night to get dressed up and have drinks!

Because this was low-key and not really a place about clothing, I didn’t do much street style; I really didn’t feel the need to go around asking strangers for pictures.  I simply sat with my friends, drank a bit, and walked around Hollywood Boulevard. It was a pretty fun night (I was in bed by midnight) and perfectly natural, if I do say so myself.  By that I meant that there wasn’t any ulterior motive; we were just having a regular night in nice clothing.

It’s really nice that there are young people who appreciate vintage clothing that can just hang out.  I’m sure in cities like London or NYC stuff like this is pretty common, but as I’ve mentioned many times before, fashion in LA is dead unless you’re into streetwear and its numerous cliques.  Maybe we’d have more luck if we wore 90’s clothing and took blurry, flash pictures at a dive bar. 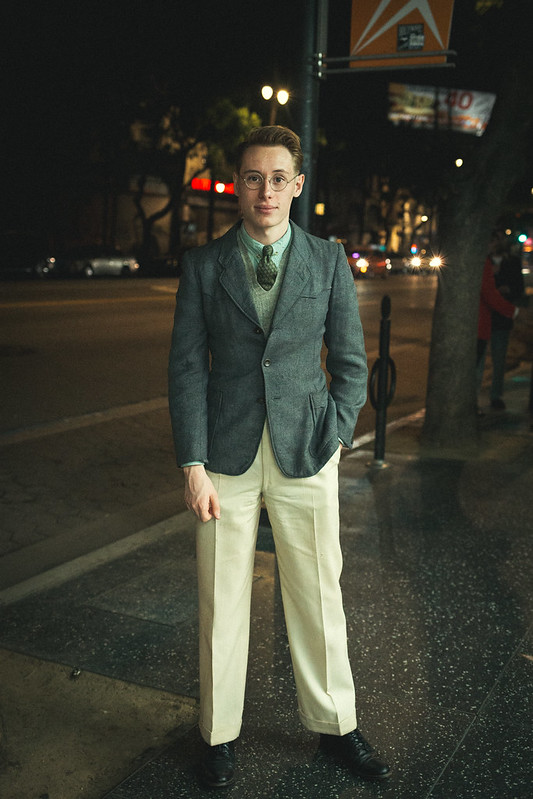 Blake was dressed like a typical 1930’s european (who may have been stuck in Casablanca) for over a year).  For a jacket, he wore an amazing German beltback piece that featured patch pockets and yoke which extended went all around the jacket.  You might think that yokes can look like a western suit but if you look at the Murder on the Orient Express article (specifically Prof. Hardman), you’ll see that German tailoring used yokes fairly often; it helps if you don’t use the two-tone suede.  You can even see more of it on this Instagram, which exclusively showcases rare German 1920-1940’s clothing. 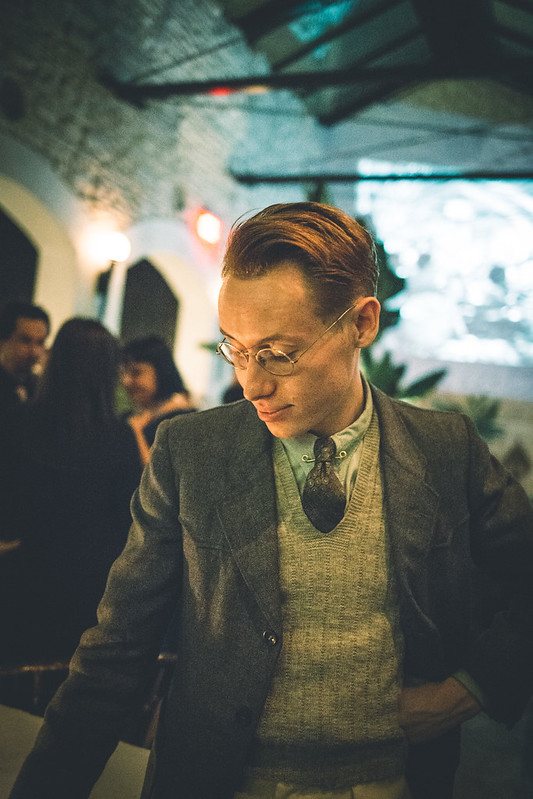 Insane weave on this sweater vest! 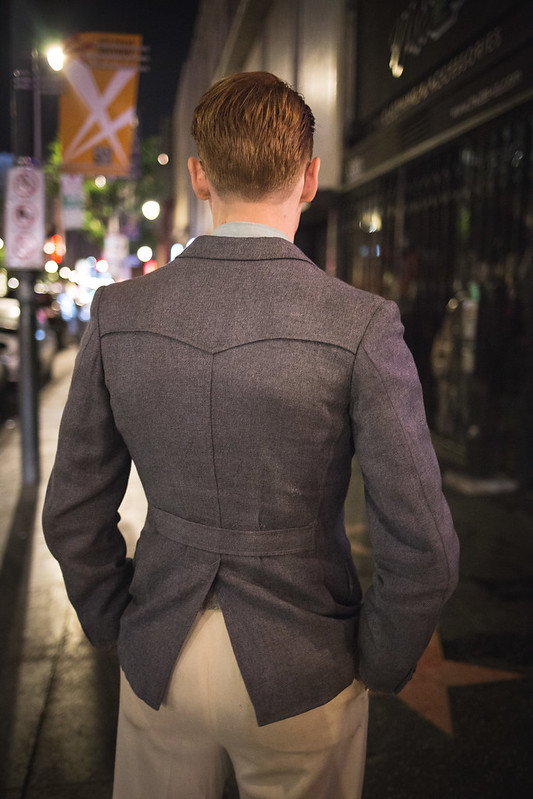 Yoked back with a pleated belt and a vent!

He adds some Street x Sprezza touches with cream trousers, a striped spearpoint shirt (with a collar bar) and a foulard tie. 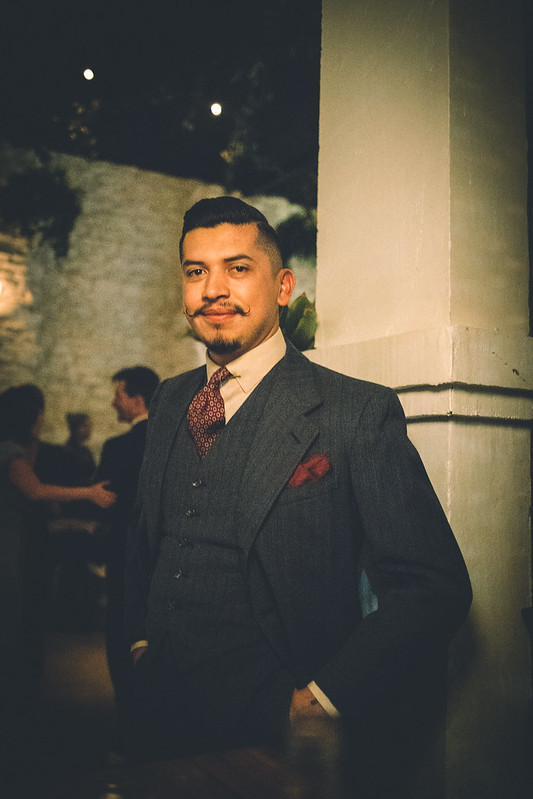 Adam  was last seen at Disneyland with Spencer and me, and I’m proud to say that he can join our menswear squad! He showed us up in a great 1930’s 3PC suit.  As you may have remembered from previous articles (like this and this), plain fabrics weren’t too common.  What most people wore were mutli-stripe fabrics that looked plain colored from a far.  Adam’s suit is completely awesome and features some wide low-gorge lapels with a 3-roll-2 configuration.  You might also notice that his trousers are fairly slim and lack  pleats; most people always assume vintage is ultra-wide and has a lot of pleats.  Don’t forget that good tailoring was the law of the land back in those days. 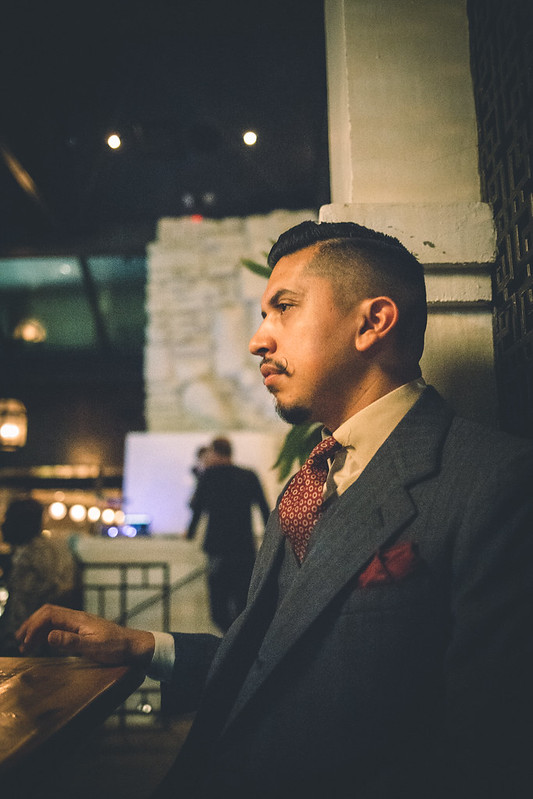 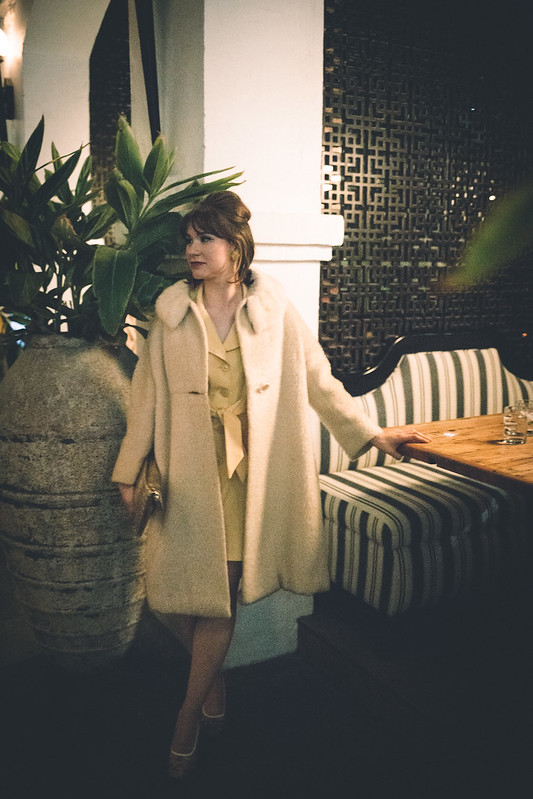 The lovely Rachel came with us and provided some swingin’ 60’s vibes. As this was an Art Deco event (1920s-40s), Rachel’s style really stood out.   We’re not sticklers on era here and I really think she looked great.  I’m no expert on 1960’s non-ivy clothing (let alone women’s clothing) so I’ll let the pictures do the talking.  She wore a fur coat over a yellow dress, which was accented by her choice in earrings, purse, and shoes.  We need more of this in LA. 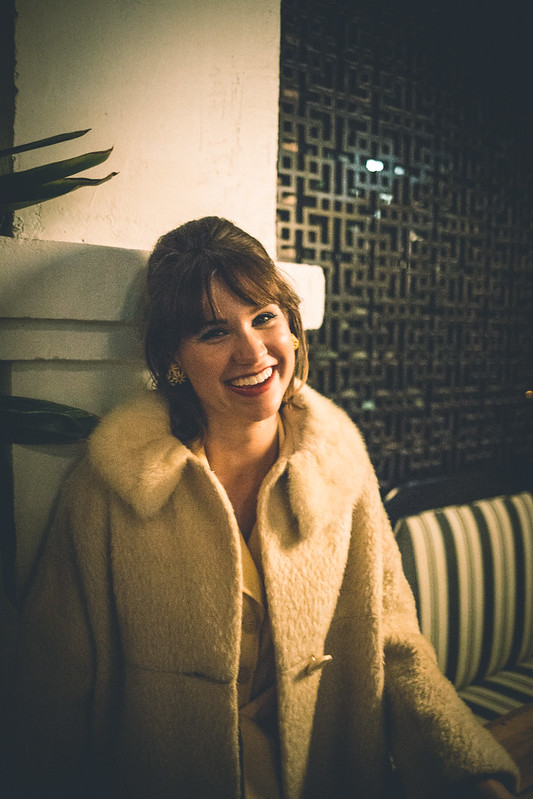 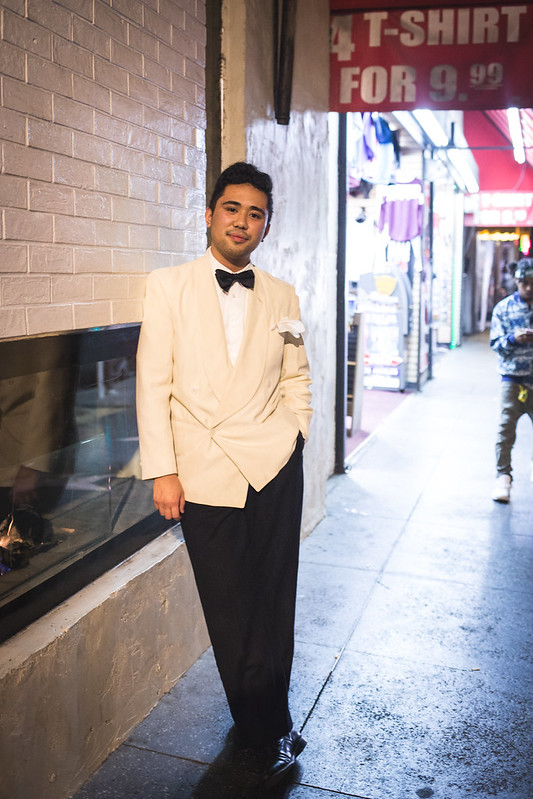 I decided to go all out with my outfit, because how often is it that you go to a Casablanca themed event?  I originally was going to just do my 1940’s bold gab suit (last seen at the Spring 2017 Dapper Day) since it’s perfect for warm weather (and you can see Rick wear something similar in the film).  However, I did a quick survey on my instagram and everyone said I should just wear his iconic white dinner jacket combo.  So I did. 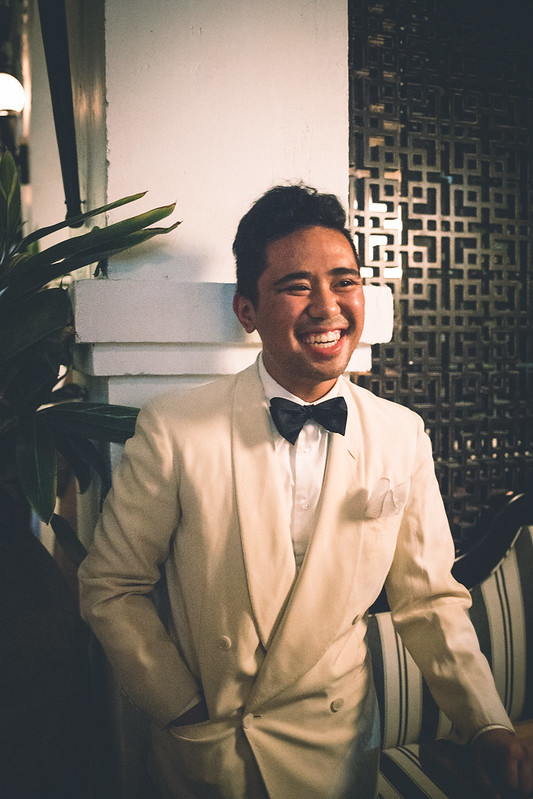 This rayon/silk dinner jacket was purchased from Benny for only $20.  Most odd tuxedo/dinner jackets go for cheap since they’re only worth something when you have the full set; picking it up was a no brainer for me.  I expected to wear it for New Years’ Eve or some other event, but going to LONO was literally the perfect opportunity to use it.  It’s from the late 1940’s, so it is slightly bold when you compare it to Rick’s, which is from the late 1930s or early 40’s.  This means that my jacket is a little bit longer, my shoulders are slightly more padded, and (most importantly) my button stance is lower.  However, my jacket still fits well and the lack of vent allows the jacket skirt to hug my hips to create a nice slim silhouette.

To complete the look, I wore a regular white spearpoint (didn’t feel like wearing a true tux shirt), a thrifted grosgrain bowtie, and a random pair of 1940’s wool tuxedo trousers.   Most people don’t really wear the white DB jacket (most opt for the single breasted version), so it’s nice to give the world a little 1940’s-Casablanca throwback.  I’m going to admit right now that I don’t own a true tuxedo, as all I have are odd jackets and odd trousers.  It doesn’t matter in this situation (you are supposed to wear odd tux trousers with a white dinner jacket) but I am looking for a full 1930’s tux very soon for the New Year. More on that as it develops!

Now that the outfit analysis is done, here are some shots from the evening! You might notice that I got red in the face; can’t help it when you get the Asian glow. 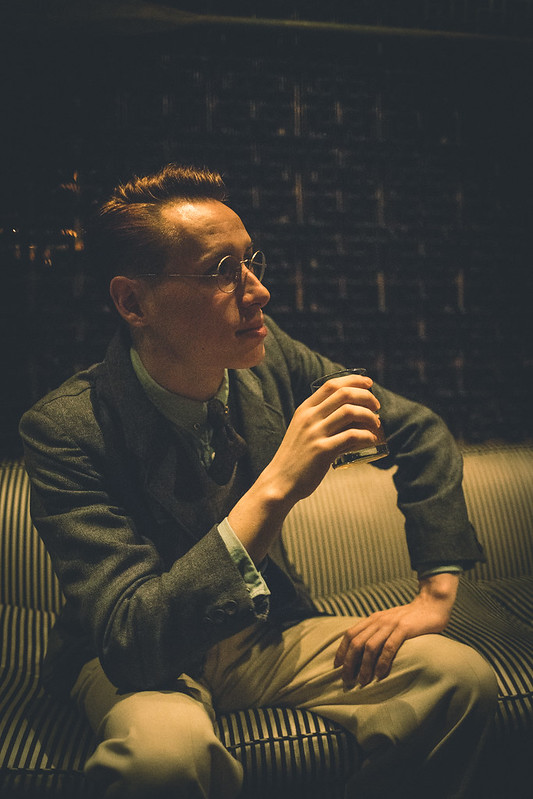 The German drinks his beer. 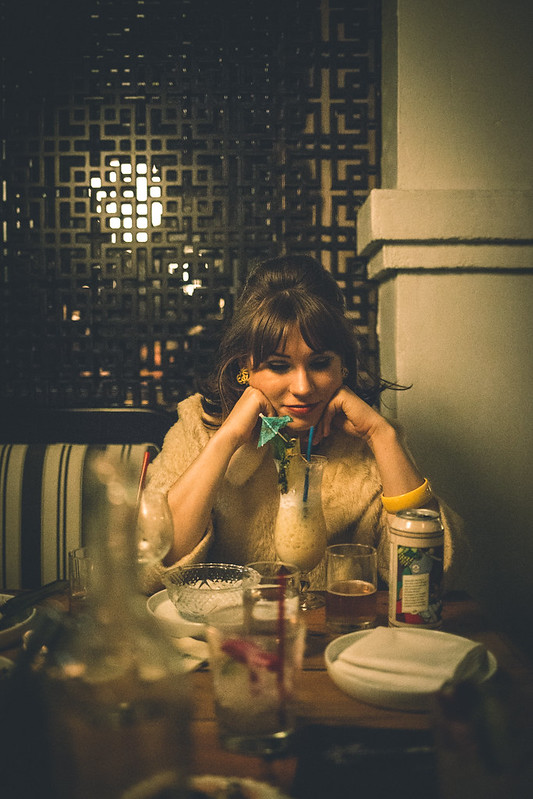 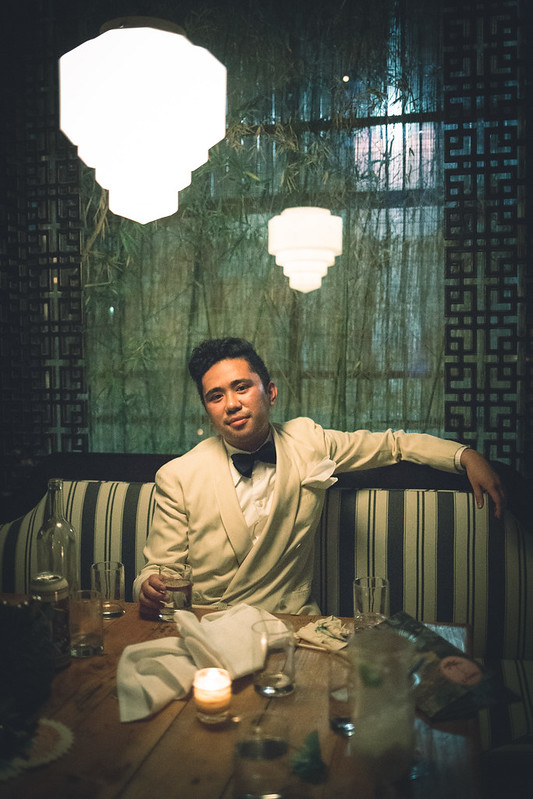 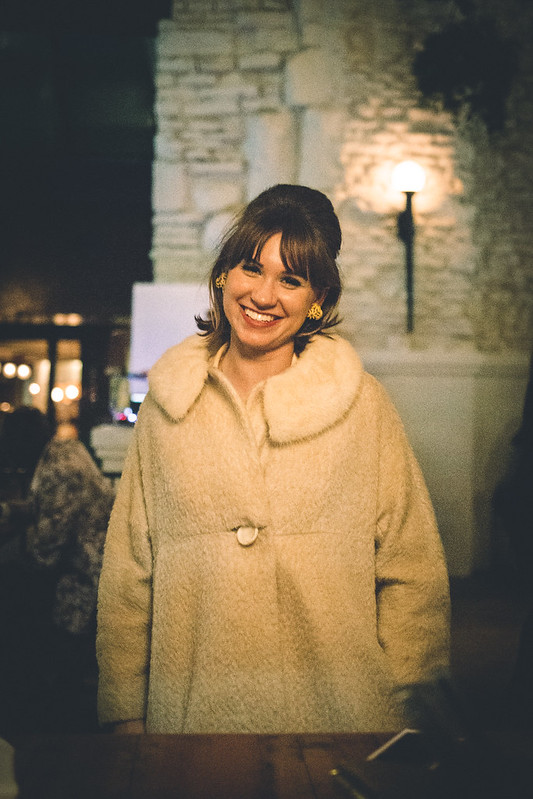 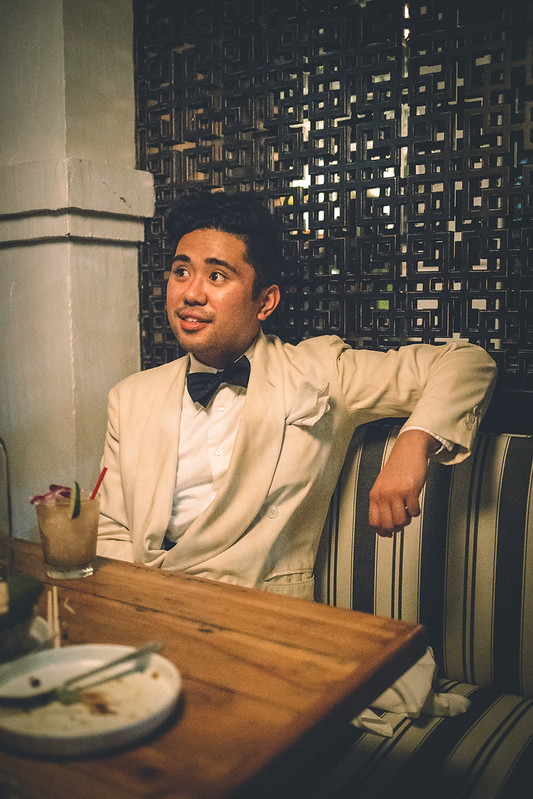 I drank a mai tai! 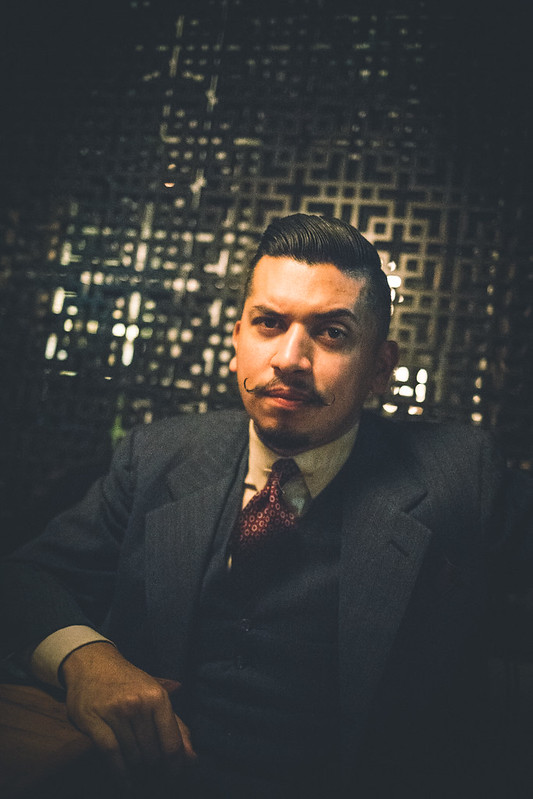 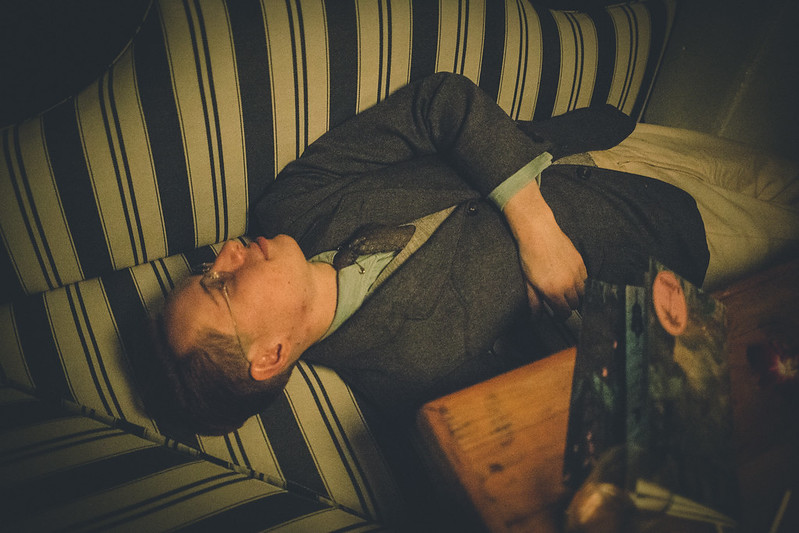 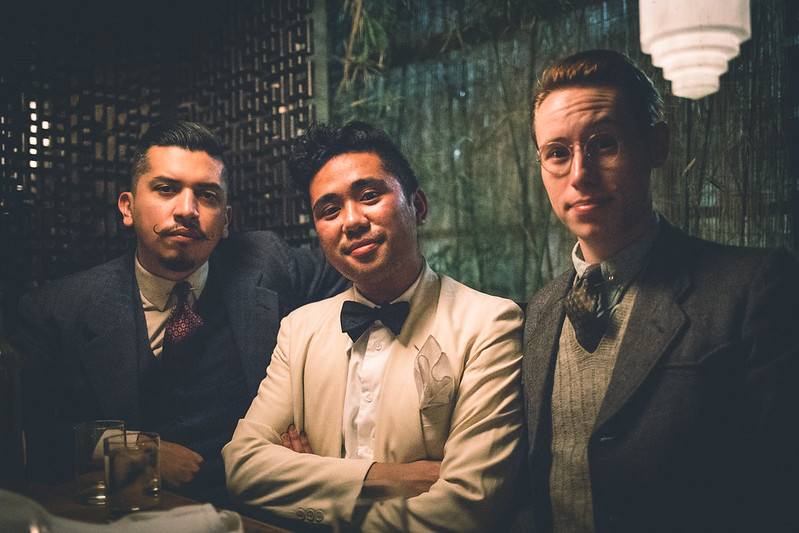 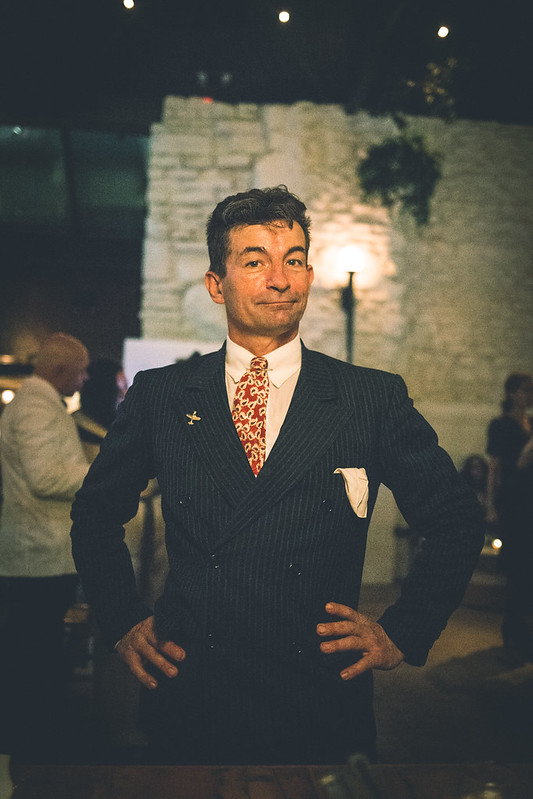 Will, a vintage collector, in an amazing suit and floppy pocket square. 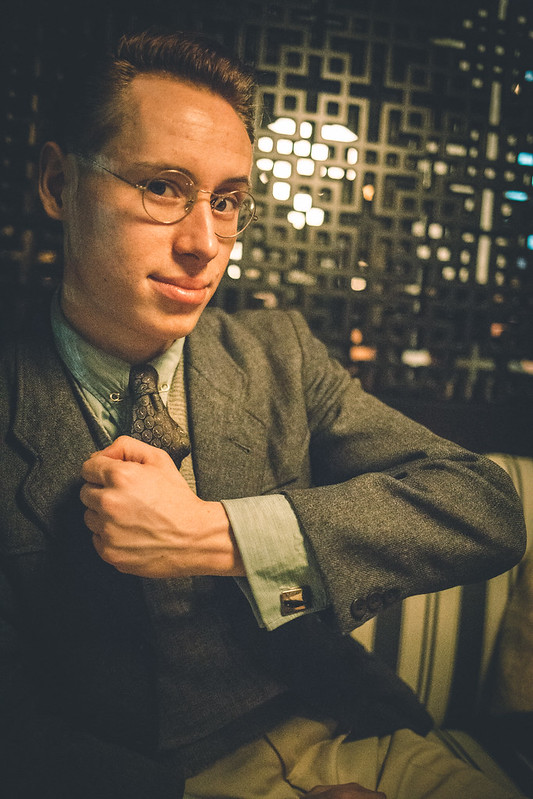 Blake loves his details, like these vintage whale cufflinks. 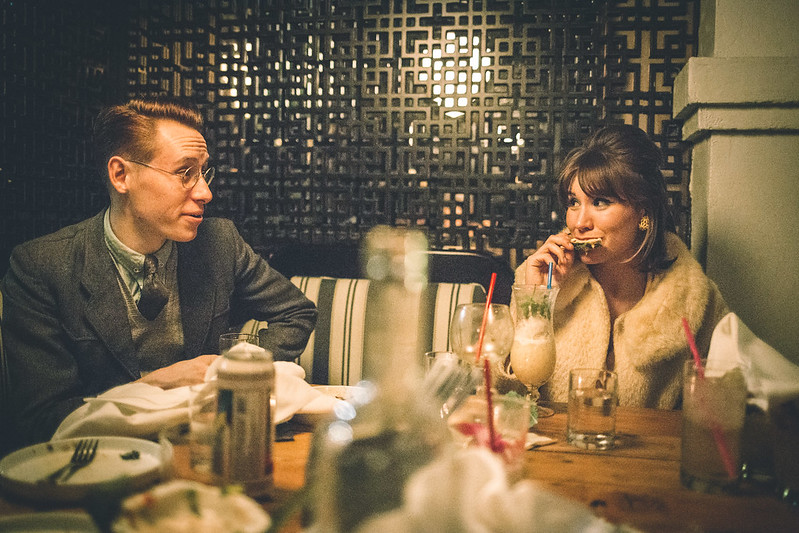 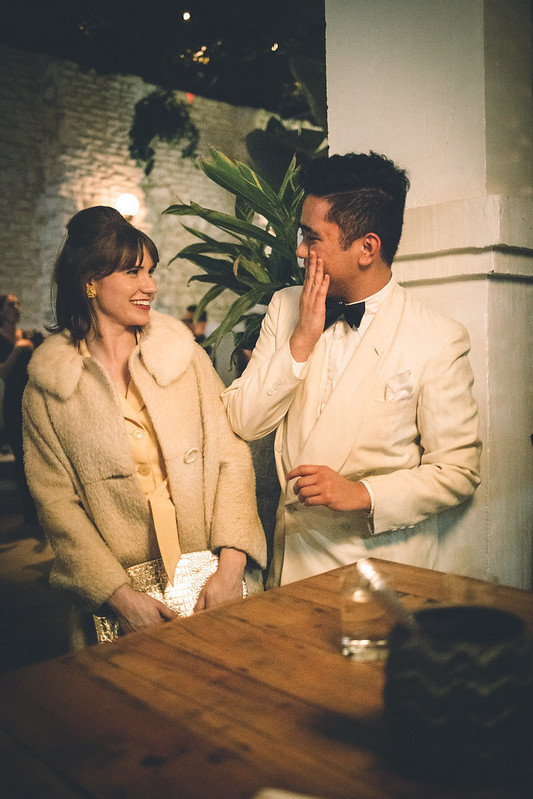 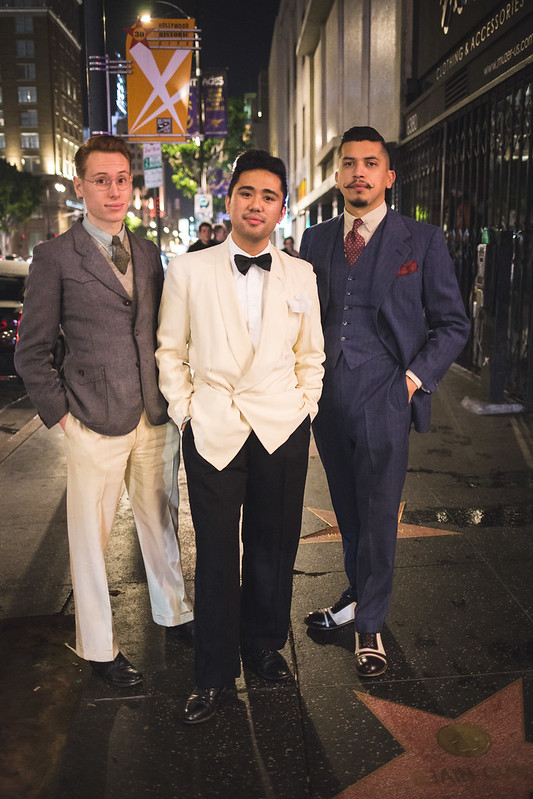 Ever since my trip to London this past summer, I’ve been wanting to be able to go out and have fun with well dressed people.  Not in the sense that the event has to be centered around clothes (like a store opening or Pitti Uomo) but just a chill hang session.  Yes, I realize that the event was a Casablanca themed outing organized by the Art Deco Society, but I think we would’ve dressed more-or-less the same if there wasn’t an event.  Hopefully this leads to more hangs like this in the future!

If it does, I’ll be sure not to walk around LA at midnight while wearing a dinner jacket.  That was the one weird part of the evening.  Someone asked if I just got married!