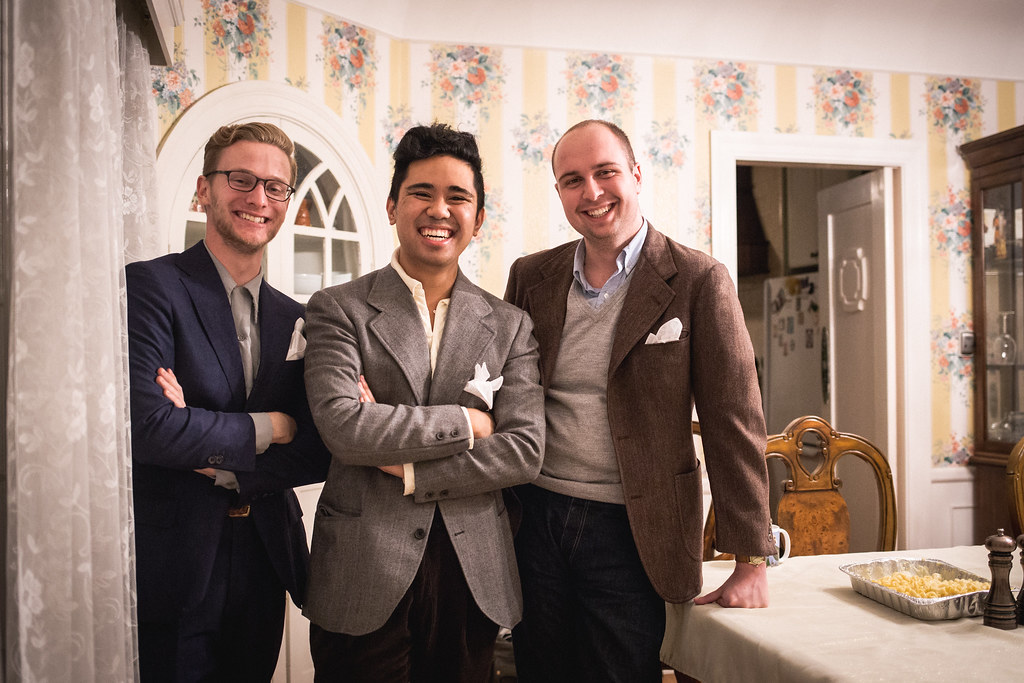 Round three, here we go!

I’ve had a lot to be thankful for this year:  I’m currently the social media manager for Ascot Chang (stepping stone for a career!), I’ve given a talk on Dapper Day about vintage menswear, and I’ve many many, many more friends who are into style in this fashion-dead-zone of LA.  And for the first time in a long time I get an actual holiday where I don’t have to work during Black Friday weekend.  Things are good.

So this past weekend, I was able to spend some much needed rest with my family and friends.  Thanksgiving was spent mainly at home playing Battlefront (watch my streams here) and eating ice cream with my extended family.  I know that I really dressed up last year, but this time, I took it easy and simply wore a tee shirt and gurkha shorts. You can see that here on my instagram (along with an ice cream turkey).

I love turkey. Also I can’t express how thankful I am for everyone in my life. Since last year I’ve made strives in my career and in friendship thanks to my blog. I wouldn’t be where I am without all your support. Happy Thanksgiving!

For friendsgiving however, it’s been a tradition to keep things just a little formal.  My friends Spencer and Jay have had a dinner with friends each year and I’ve been grateful to have been invited to partake in their festivities.  The times that I’ve gone, I was already wearing something formal because I was at work.  The first time we covered it on the blog, I wore a turtleneck and a tweed DB (which I no longer own) and the second time, I wore comfy flannel separates.  I was caught slightly off guard this time, since I misread the invitation; it said semi-formal and I read it as slightly casual.  My plan was to wear jeans and a vintage sportshirt but after conversing with my friends about their attire, I realized that I had to step it up.  Luckily I made a point to go to my tailor before dinner, so I was able to put something together that would pass!

Here’s what we wore to Friendsgiving 2017. 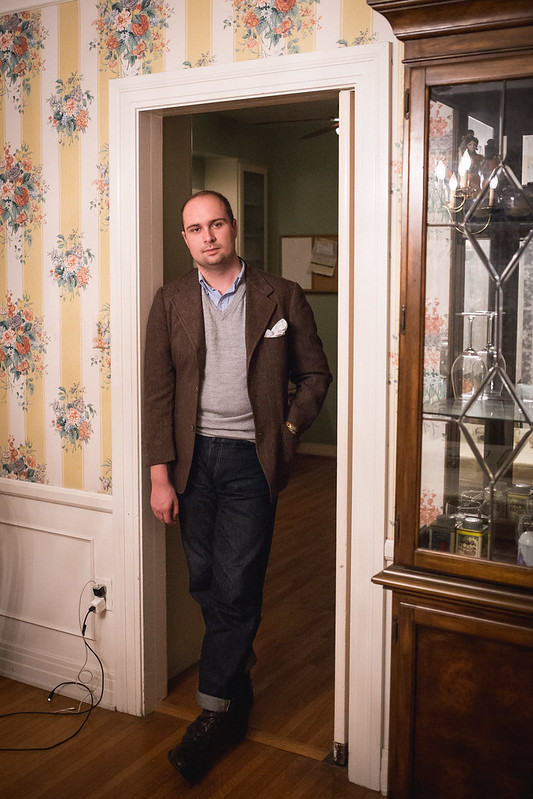 I remember that there once used to be a time when Spencer said he’d never wear jeans with a sportcoat; he used to only wear them with casual stuff.   Now that he’s succumbed to it, he’s found that it’s a great combo that works when you don’t feel like wearing trousers.   For dinner, he combined his Luther’s selvedge denim with a brown wool belt-back , blue OCBD, and grey sweater.  Footwear came in the form of wingtip boots, which add a bit of ruggedness to the outfit.

It’s definitely dressed down compared to the previous years, but it’s not super casual.   I expect that it was very comfortable and in-line with this “neo-traditionalist” (coined by Christian at Ivy-Style) movement. 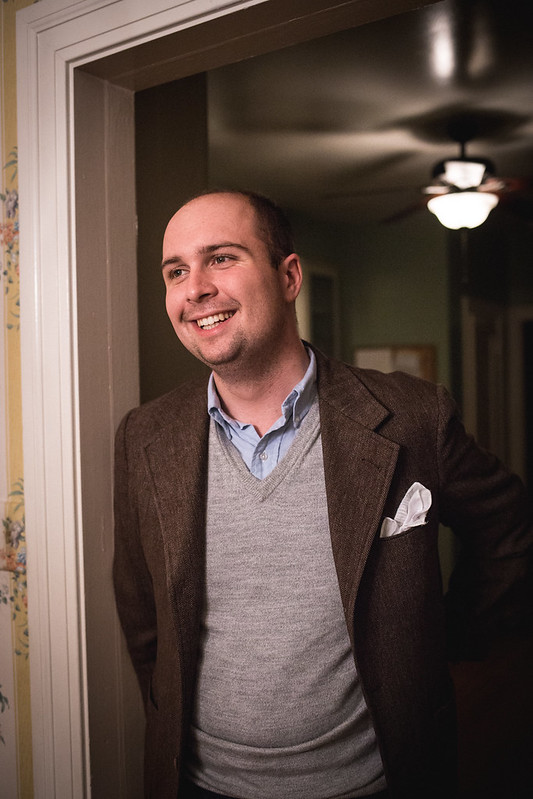 You don’t need a tie to look good! 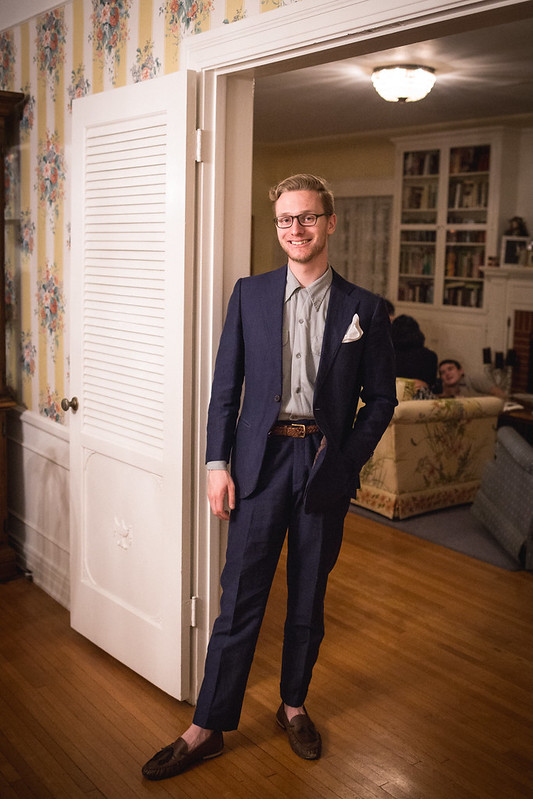 Jay raided my wardrobe for the dinner.  I’ve been trying to sell this suit for a little while, so it’s been in my car.   Jay saw it and asked to try it on, so I obliged and eventually allowed him to wear it because of how good it fit.

You may recognize this suit from old instagram pictures and blog posts two years ago, but it’s a linen-wool Lazio fit suit from Suit Supply.  It was one of my first ever contemporary suits that I paid retail for and was actually really great due to the wide lapels, soft construction, and moderate rise.  I definitely added the cuffs and suspender buttons to make it more “Ethan”.  Since it was one of my first modern pieces, I made sure to get it extra slim (I bought a 36S instead of my normal 38S) to differentiate it from my 1930s-1940’s clothing.  As a guy who currently opts for a fuller cut to mix eras at will, I regret that decision so much.  It fits passably on me, but the jacket is too snug in the chest/waist, the sleeves are too short, and the trousers are extremely tight in the ass and thighs (especially if I wear them high for a high rise look).  Luckily it fit Jay rather well!

You might be thinking that a linen suit doesn’t fit with the Fall theme. Well, 90F weather in Southern California would beg to differ.  Sure, it may cool down in the evening, but you should always dress for comfort! 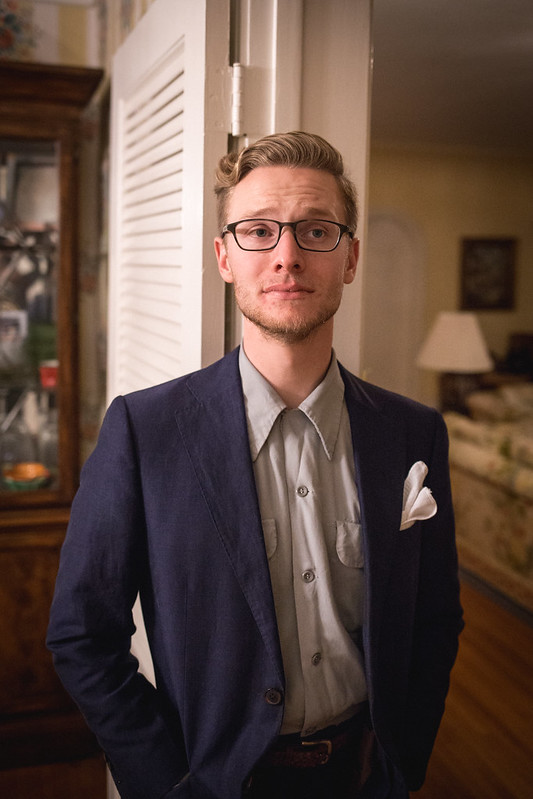 Jay has always been a more experimental dresser than Spencer and I when it comes to suiting.  Last time he wore a 1930’s WWII repro shirt with a 40’s suit and this time he decided to do the “air tie” with a 1940’s gabardine sport shirt,  I would have preferred the runaway collar for a more vintage look, but this actually looks great on him.   Don’t say that this is too 1980’s or not accurate for a vintage look, because guys definitely did it back in the day.

Oh and the grey gabardine shirt was mine as well.  The only thing that Jay actually owns is his underwear and loafers. 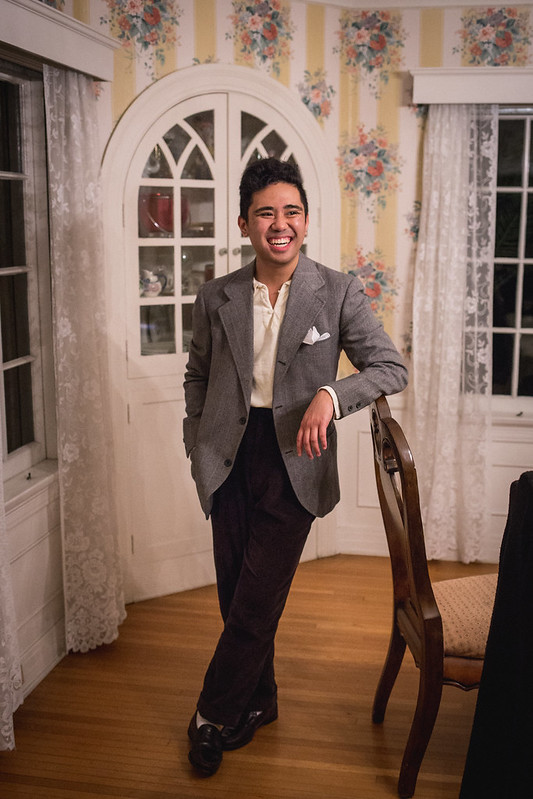 As I said before, I wasn’t really planning on dressing up. I had only packed some high rise denim and my cream SJC polo.  Spencer and Jay encouraged me to try and dress up, so I had to make do.  Here’s my thrown-together-at-the-last minute look; everything except the polo was picked up at the tailor right before the party.

I’m not sure exactly what I’d call the look. It’s definitely got a lot of casual ivy vibes, with a hint of 1930’s thrown in thanks to the spearpoint polo.  The jacket is a grey tweed 1960s-70s one that I got for $25 on eBay  and trousers are Lauren by Ralph Lauren (cheap) cords that I thrifted a few weeks ago.  I say the outfit is extremely ivy thanks to the jacket with 3-roll-2 configuration and a dart-less front (hook vent not pictured) and cords, both of which are quintessential pieces for the look.

Personally, I feel like this has some 70’s vibes to it as well, since that’s what I think of when you combine a light grey jacket with some dark brown trousers. I’m sure it was done in other eras as well, but I could have sworn that I’ve seen this in a 70’s Bond film or in my grandpa’s photo albums.  It’s still a solid look, but I’m glad I didn’t do the runaway collar, since that would look way too disco and negate all the ivy styling. 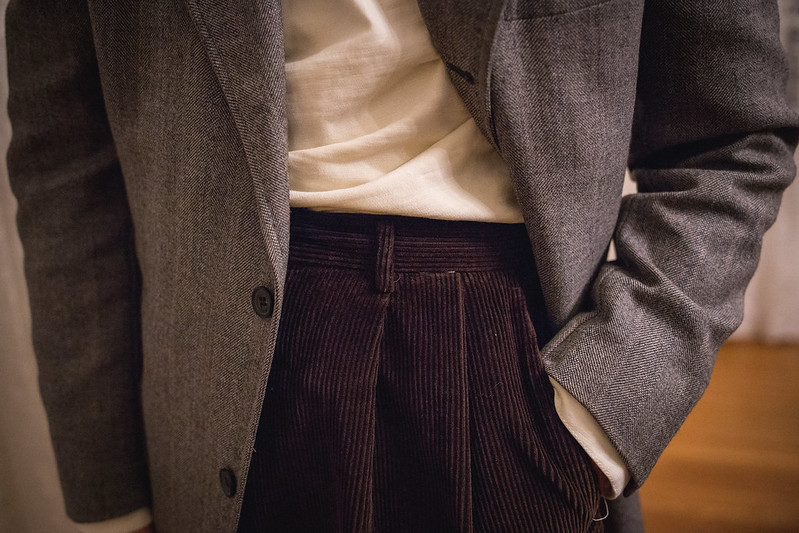 I’ve been wanting cords for a while, so thrifting these wide-wale cords were perfect.  I see them all the time in thrift stores, but never committed to them until very recently! Seeing Armourers Ben Levy and Rick Carroll rock some corduroy definitely contributed to my need of the fabric.

These trousers not really all that special other than the fact that they are a rich dark brown and feature double reverse pleats.  With a Lauren by Ralph Lauren tag, these are not high quality in the slightest, but they work for slouchy fits.  Obviously they had to be taken in all over, but the result is comfy pant that will definitely see some use in the coming months.  You guys all know I love dark brown and these are actually the only ones I have (everything else is quite a few shades lighter)!

You can expect a blog post on these later on. 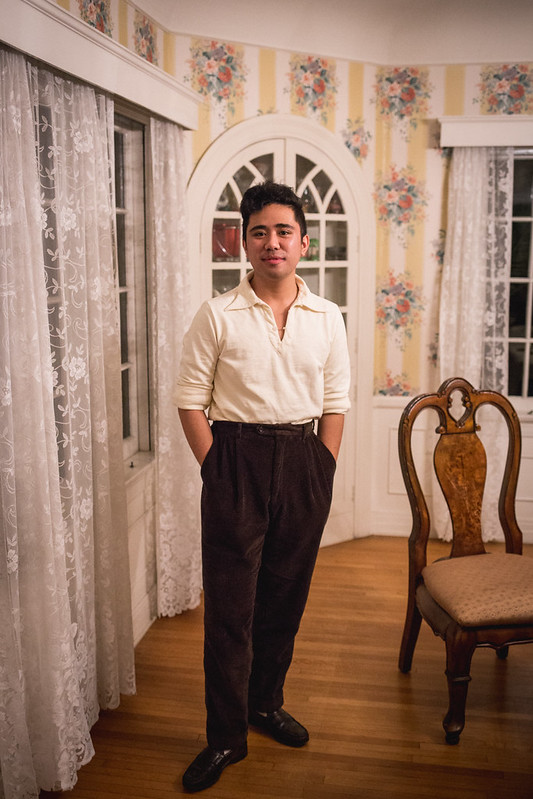 Fit is perfect.  Ruben is a master at tailoring miracles. 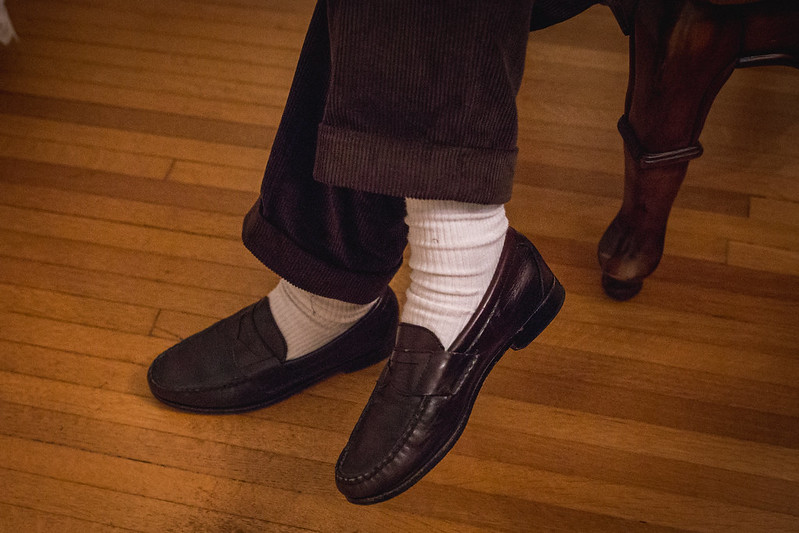 Obviously you can’t be true ivy without some white socks and penny loafers.  These penny loafers are actually Allen Edmonds ones that I picked up at a thrift store. They’re soft and “unstructured”(?) compared to the tassels that I normally wear, but I wasn’t going for a stiff, formal look this time. I just wanted to relax and eat!

The dinner was very fun! Everyone brought food so we all ate very well.  Appetizers consisted of olive+cheese penguins, two different types of Macaroni & Cheese, salad, and a great casserole while Jay prepared some rotisserie chicken.  We finished off the night drinking Martinelli’s apple cider and playing Cards Against Humanity (with some Apples to Apples cards thrown in for good measure).  Obviously I brought my camera to document the shenanigans. 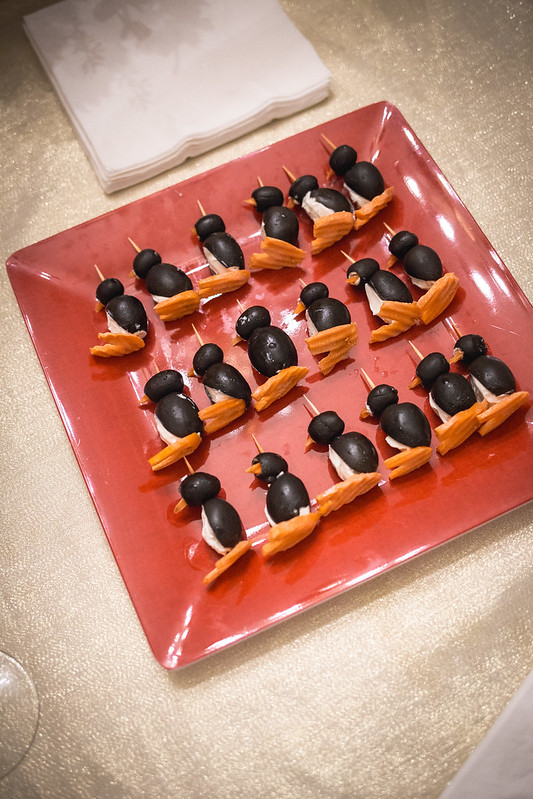 March of the Penguin 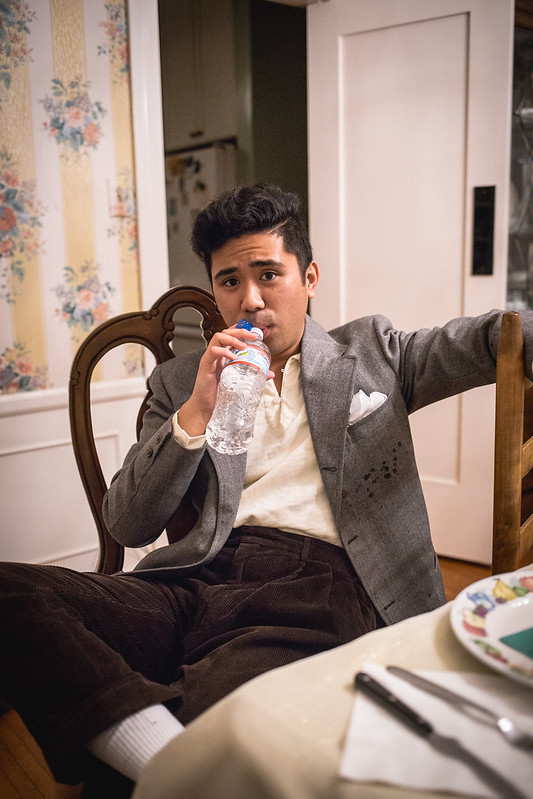 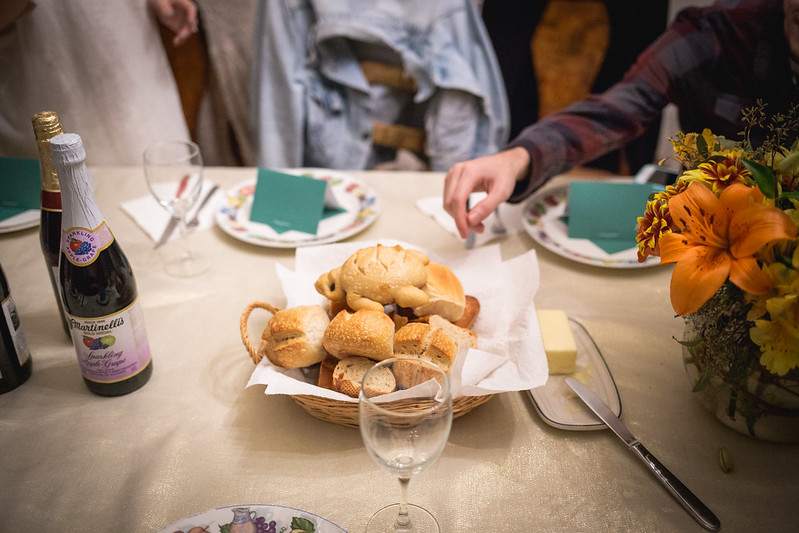 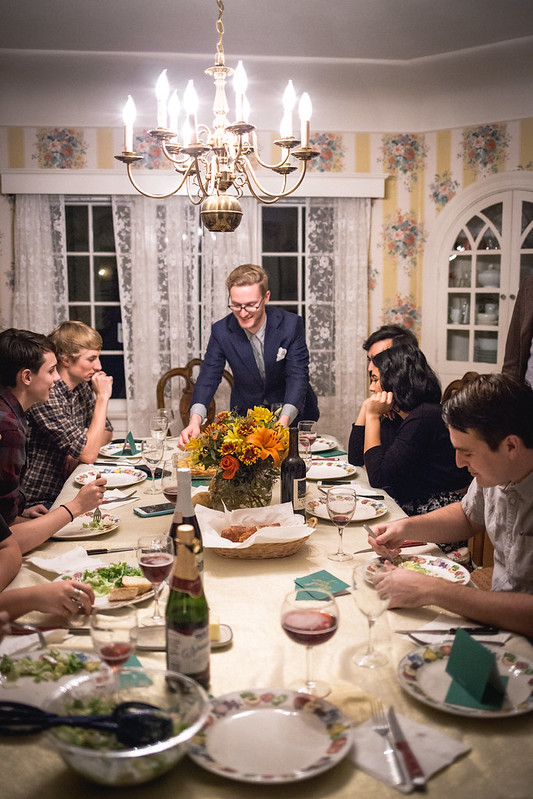 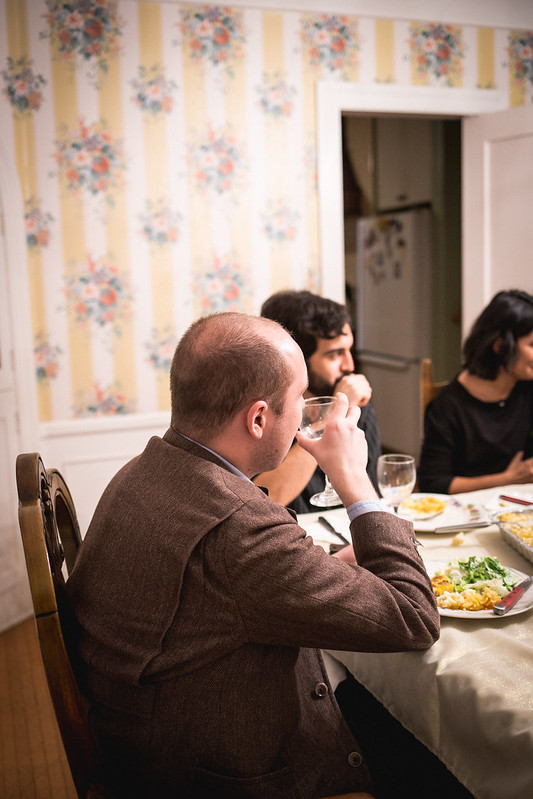 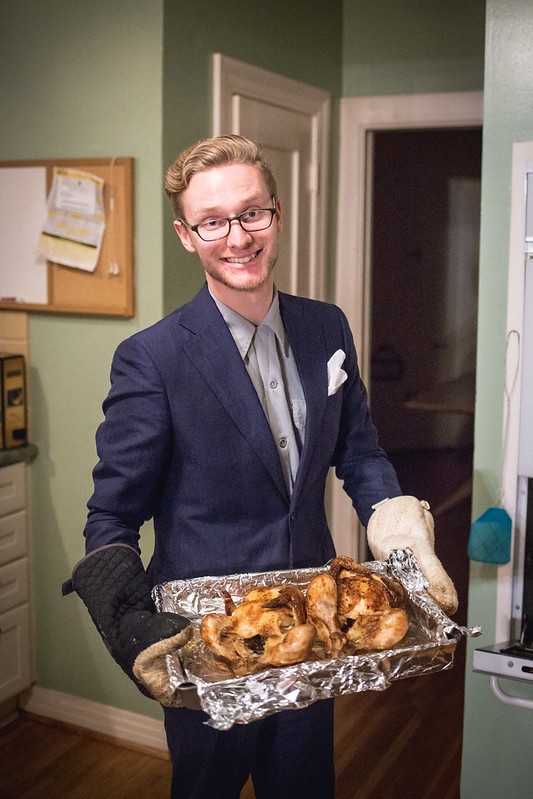 Jay gives us the bird(s). 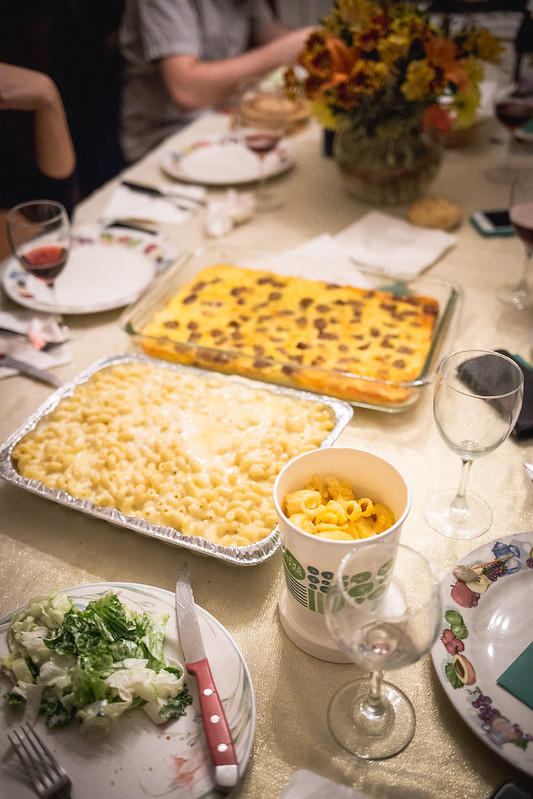 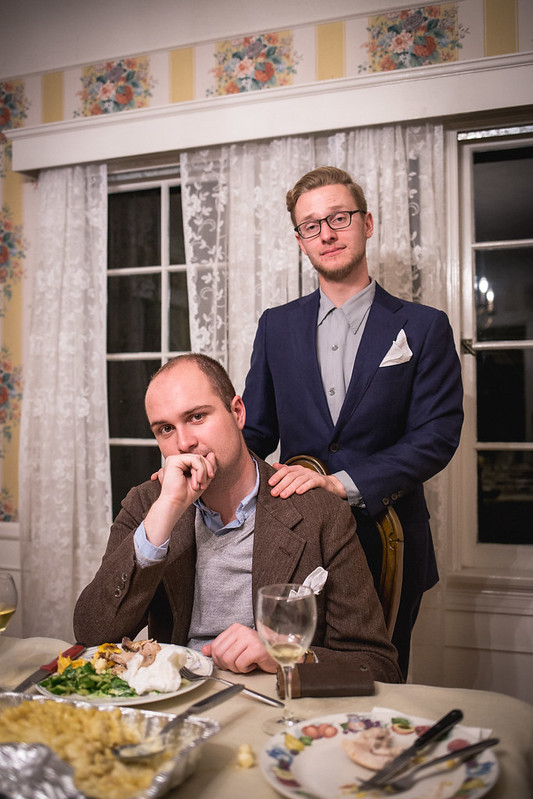 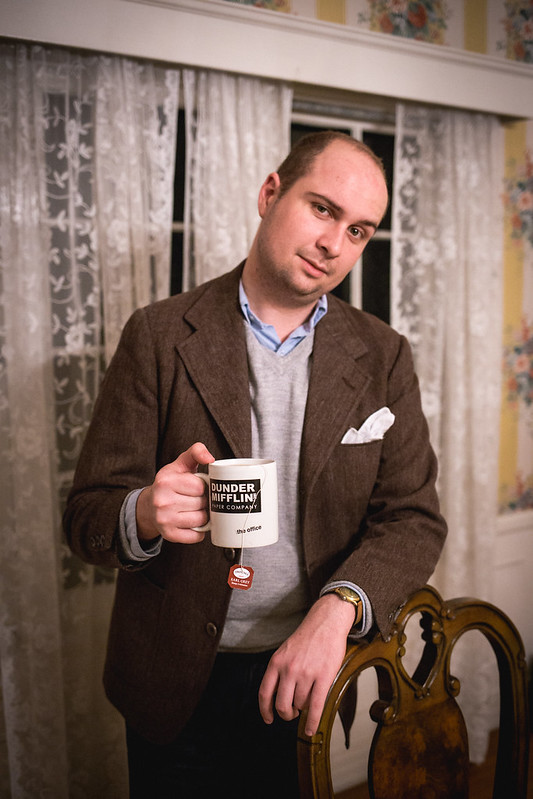 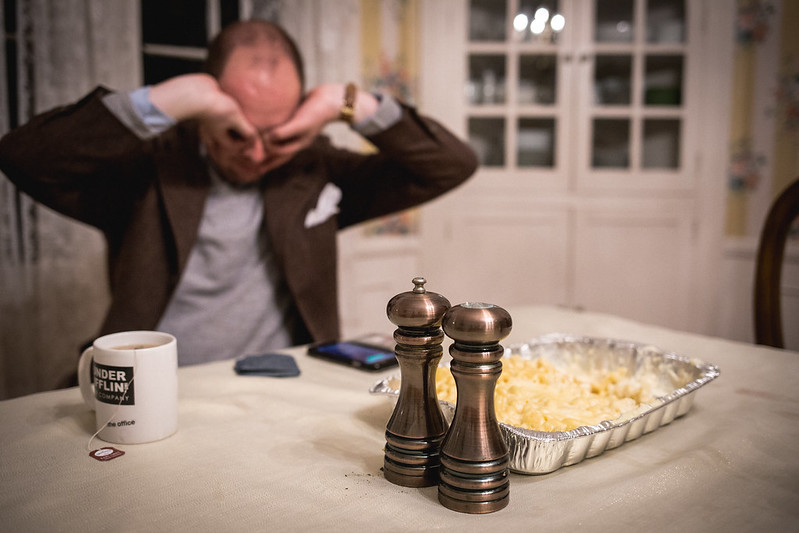 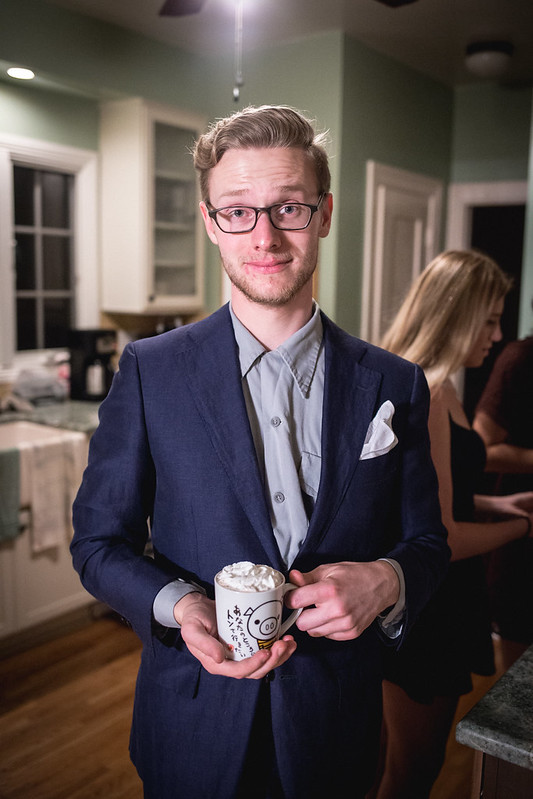 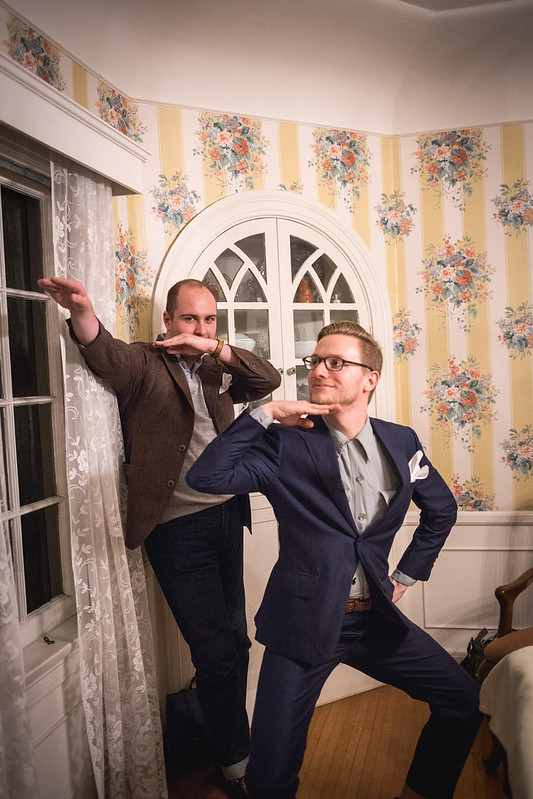 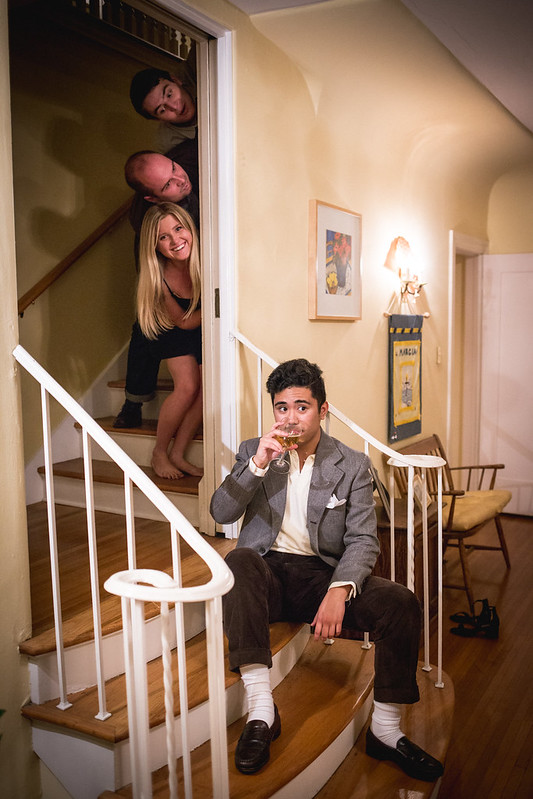 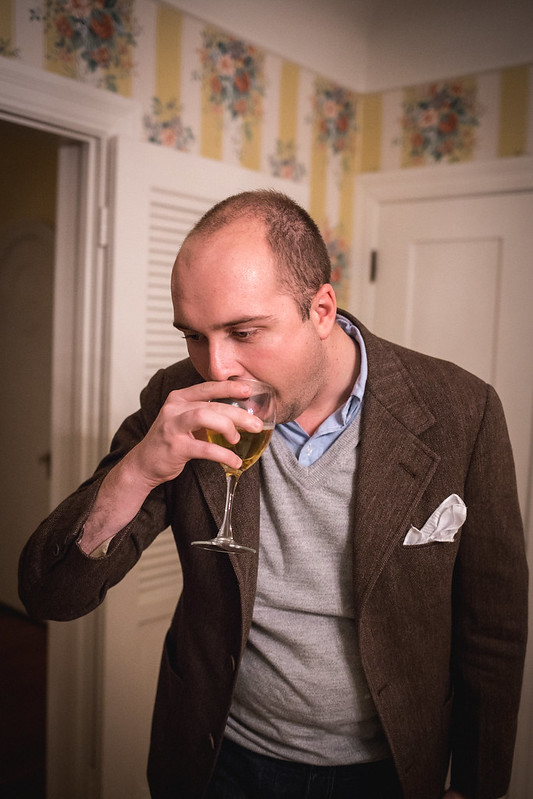 Spencer drinks his cider in a normal fashion. 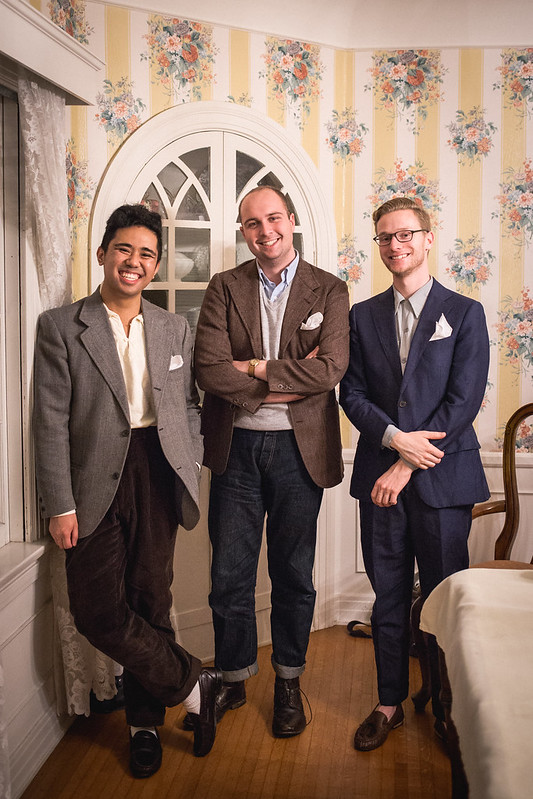 As my weekend draws to a close, I am filled with gratitude that I was able to take some time off and spend it with my friends and family.  Those close to me (or at least who know me in real life) will know that I spent the last two years going to grad school for my MBA and working two jobs (one of them retail) which prevented me to from spending time with people.  Sure I was able to do friendsgiving the past few times, but it was all very rushed for me and I couldn’t stay for very long (or even come on time).  Now I was actually able to help set up and spend as much time as I wanted!  I will always be thankful for where I am now and the fact that I have the best friends and family who have supported me.   I realize that this is mainly a menswear blog, but I thought it would be nice to share some of these thoughts with you.  Plus if you follow me on instagram, you’ll know that I’m pretty open with my followers about my life.

I also want to share that I will be in NYC from Nov 28-Dec 3 for work.  Ascot Chang  is doing a bespoke demonstration and whiskey tasting on Dec 2 and I’ll be there documenting the event; I’ll also be there during the week learning more about our processes and building more content for the company.   Please do stop by and say hello or email Info@AscotChang.com if you’re interested in an appointment (or the event). I’m not sure how much free time I will have during the week as I will be staying outside the city, but I am definitely free all of Sunday.  You guys can expect that a visit (read: pilgrimage) to Drake’s and The Armoury is at the front of the list.

I hope you all had a wonderful weekend and thanksgiving!