It is my belief that the rise of menswear in this modern era has its roots in the critically-acclaimed show “Mad Men”.  Guys started wearing suits more, putting a pocket square in that razor thin square fold, and even brought the fedora back in some circles.  A while ago, I had the pleasure of shooting Spencer and Jay, the most well dressed high schoolers I know.   They love the show and carefully evoke the style in their outfits.  As we had a swell dinner at South Coast Plaza, I just had to snap some pictures of these guys!

“An Englishman” on Spencer 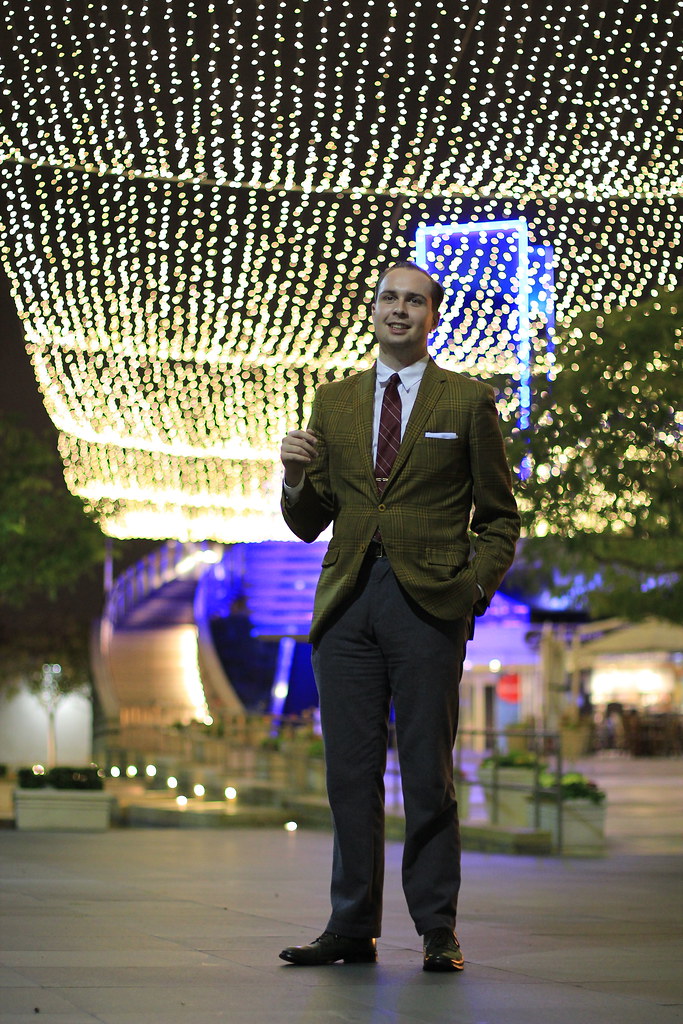 Spencer is always a fan of true vintage.  Wearing a plaid 1960’s jacket, he evokes a british “mad man” of the time period, with everything perfectly tailored.  Wearing a textured or patterned jacket sets you above the rest when wearing a blazer or suit.  This isn’t a jacket for beginners; you have to be sure your pants, shirt, and tie all work together as to not create an eye sore.  Spencer is a smart man; he wears a plain white shirt with the jacket and includes a simple striped tie.  The tie is widely spaced so its not “lost” in the patterns of the jacket. 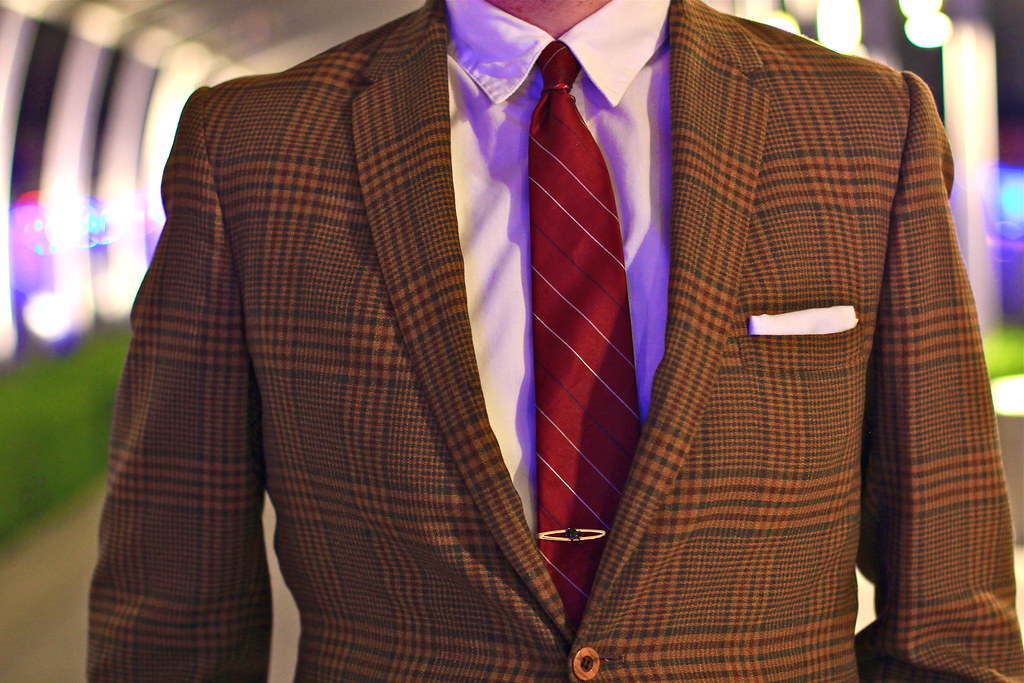 Check out all the patterns in action.  The wood buttons, the perfectly folded ‘square, and the black pearl tie bar.  Notice he doesn’t wear it high on the tie; you’re supposed to wear it a little above your natural waist to hold your tie down in the wind.  Anywhere higher and it’ll go flying.   Spencer’s style is, however, a bit lower than how we wear it today, but that was the way to go in the 1960’s.  He’s a die hard fan. 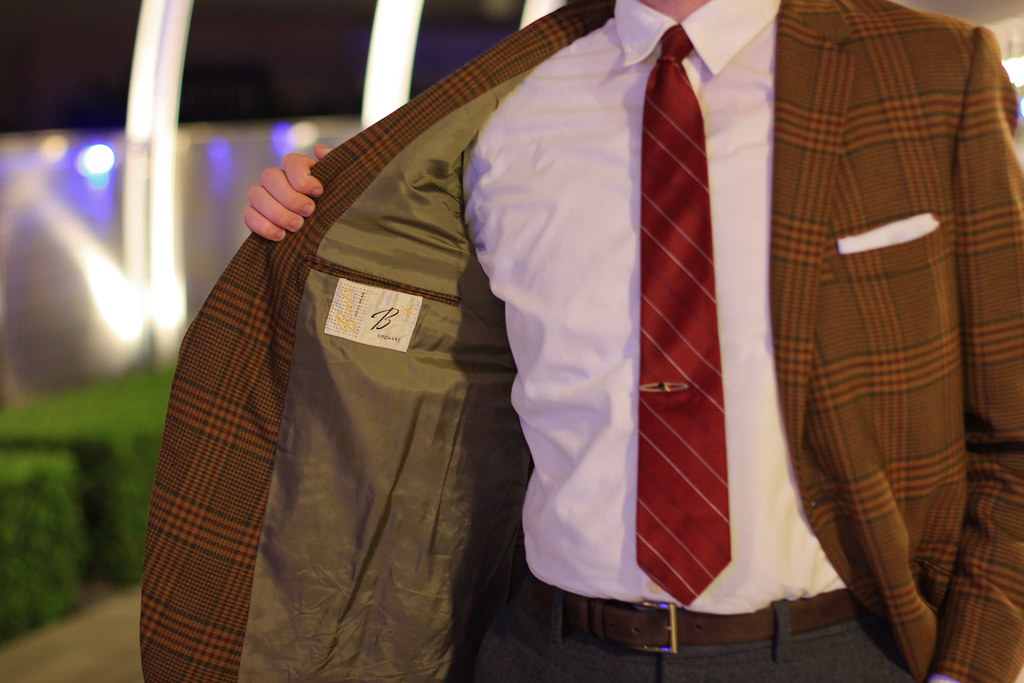 Now notice that label.  Near the 60’s was the end of those hand made logos.  It’s an artistic touch hat doesn’t really exist anymore. 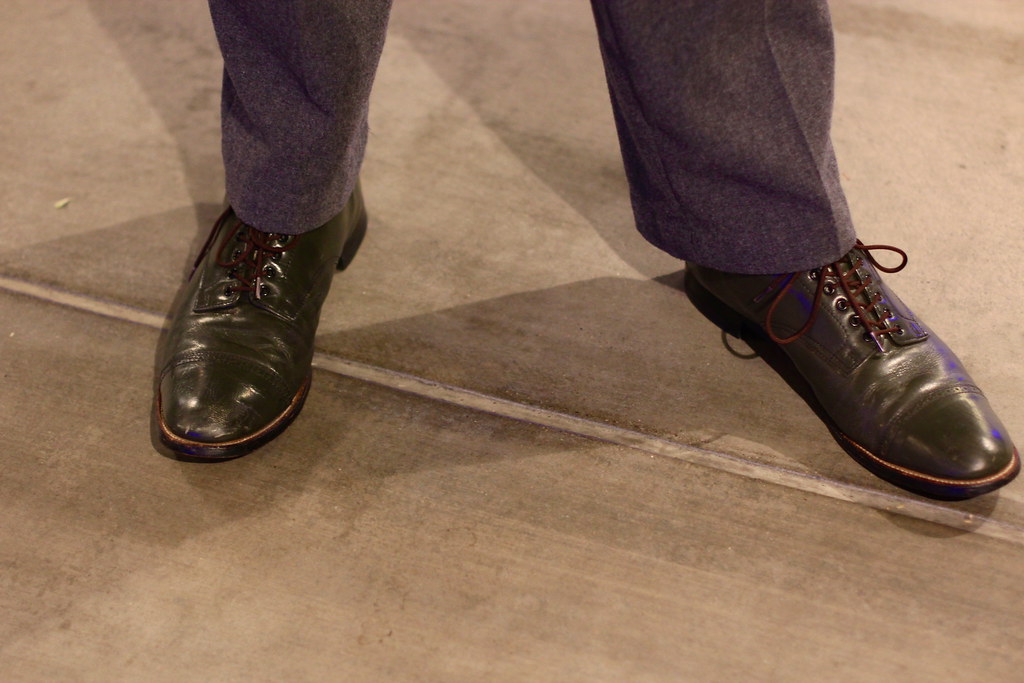 Put away those brown and black shoes guys and take a splash of color.  Spencer wears some gorgeous olive green captoes to tie the outfit together.  It echoes the green in the jacket and shows Spencer’s amazing attention to detail.  Well done, sir! 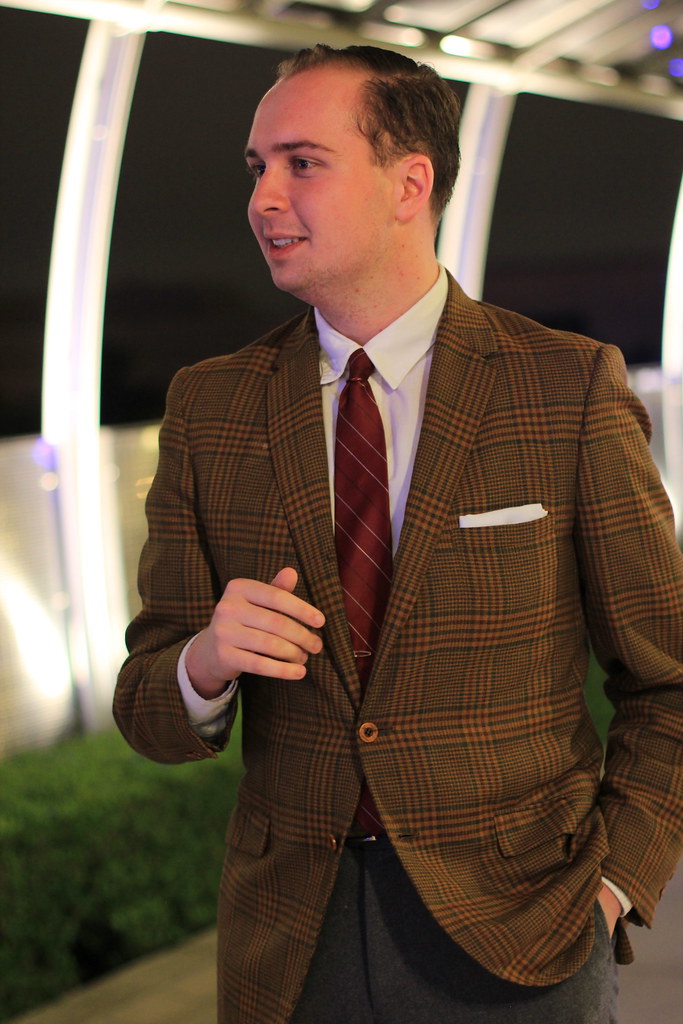 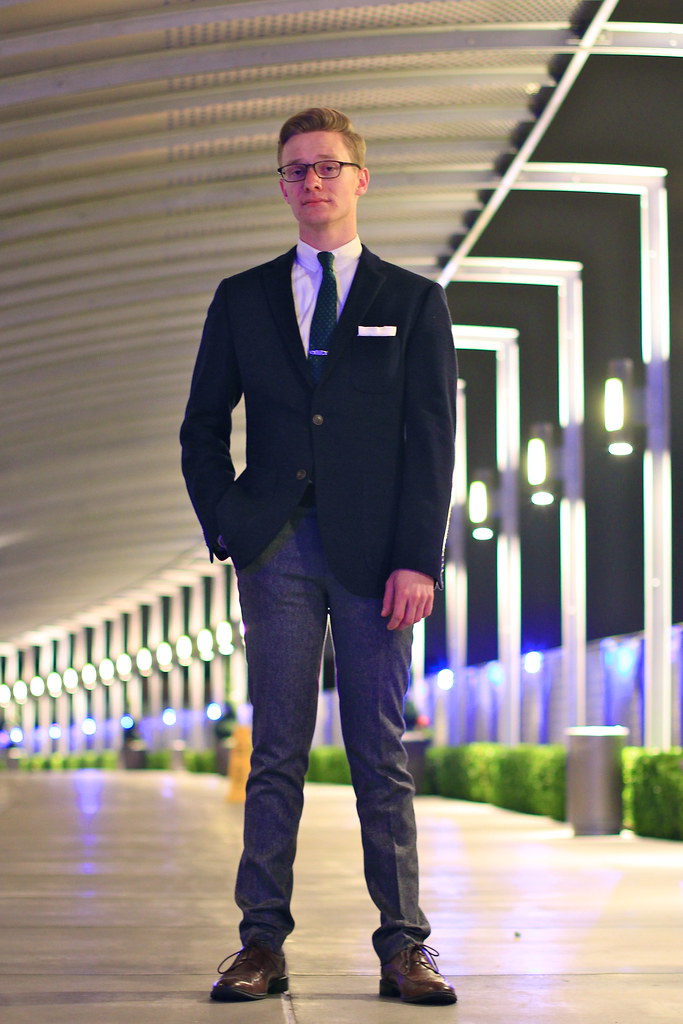 Let’s talk about the jacket.  It is true that it’s a typical color, but the details is what makes it unique.  It’s got patch pockets and brown wooden buttons, making it different than your typical Nordstrom and Macy’s suit.  See, you can find some great stuff at H&M!    Just like Spencer, Jay wears some grey trousers which adds the right amount of “old”.  While the fit makes it modern, the details still gives it that 1960’s vibe. Blue Blazer and grey trousers? Check.  Square-fold pocket square? Check.  Awesomely patterned 1960’s tie?  Check.  Jay’s got the Mad Men look down. 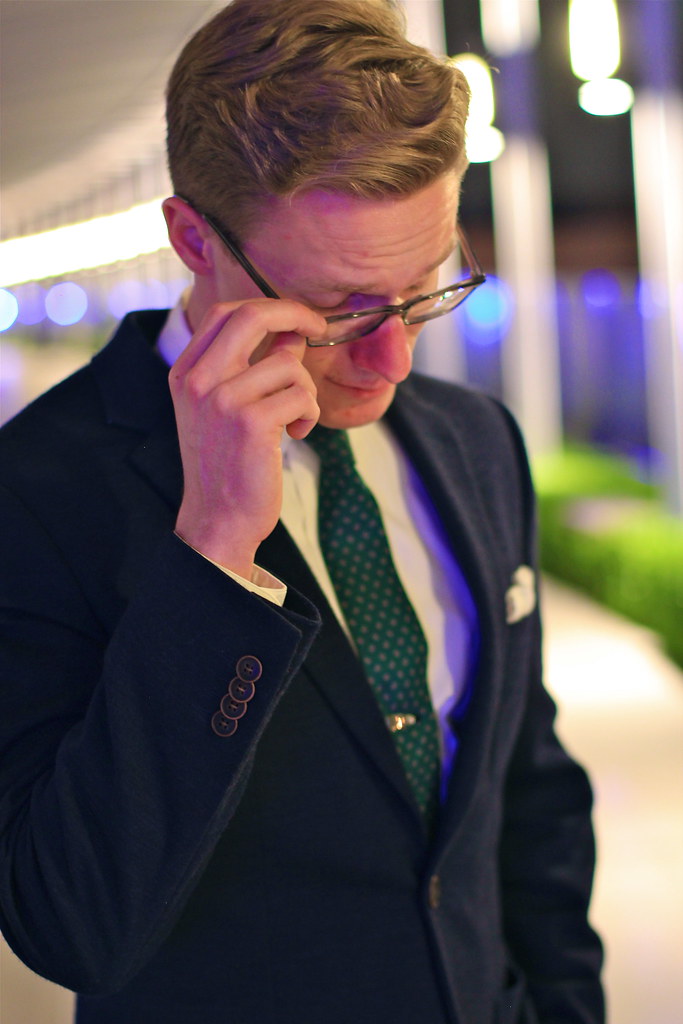 Button action is always great to have on a blazer or suit.  Always go for unique.  This feature is a bit “hipster” but that’s what I love; wooden buttons beat plastic crap all the time. 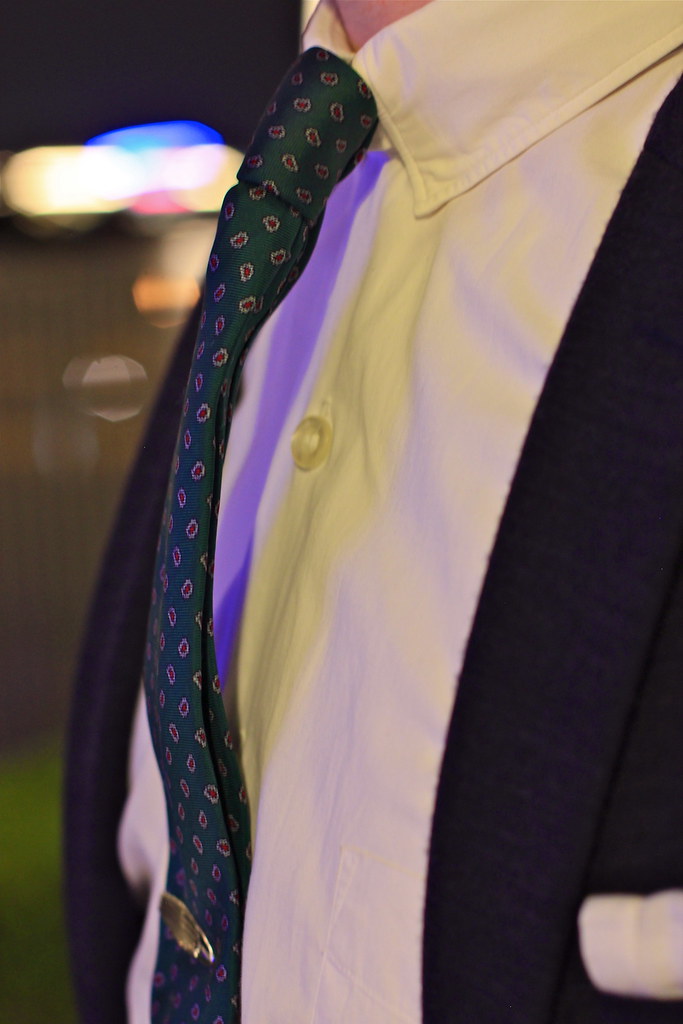 Let’s talk about this shirt.  It’s a true vintage 1950’s tab collar; you can barely make it out under his tie.  This shirt was common in the 1920’s and made its why back in the late 50’s and early 60’s.  Being another alternative to the collar bar, it’s a gentleman touch that’s very unique.  If you want a special sartorial secret for yourself, get one! 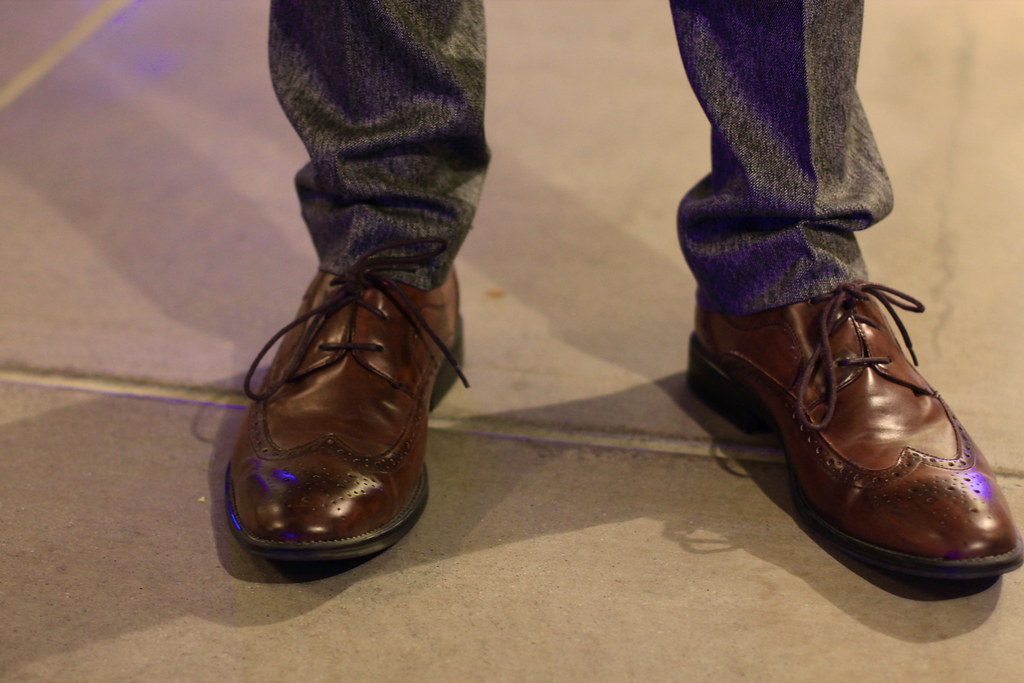 Last details the best details; your outfit should be like bookends!  Start strong, finish strong.  Jay’s pant’s have a great weave/pattern and his grey goes well with the deep walnut brown wingtips. 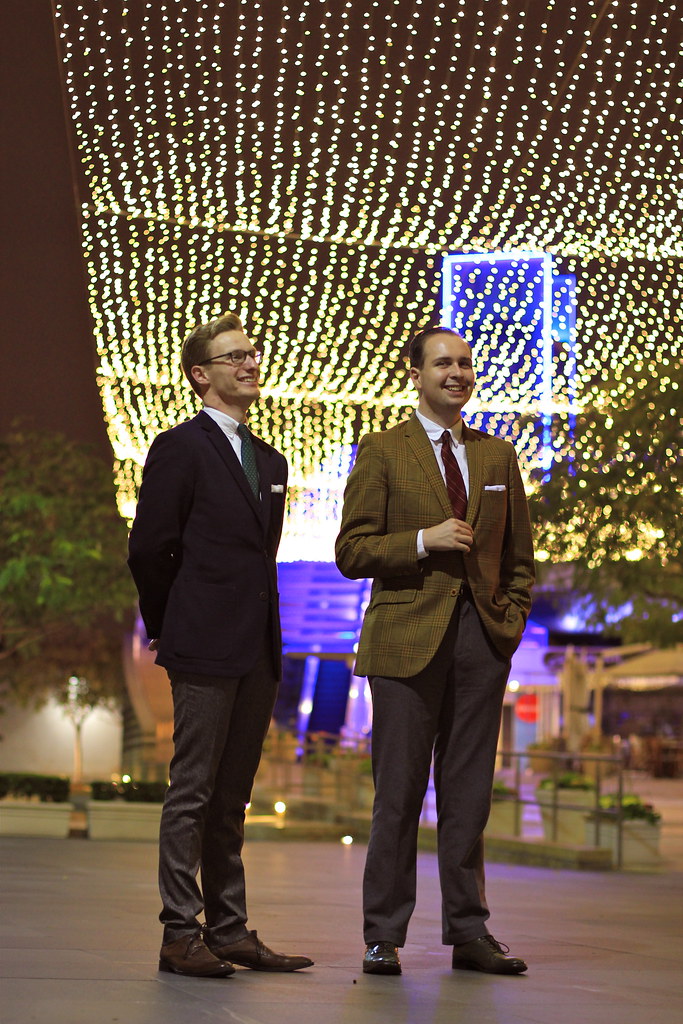 It truly was a pleasure shooting these guys.  I’m always impressed when young people dress up and I’m not even that much older than them!  What I think really works the best is that these guys don’t just wear the typical “mall menswear”.  They mix patterns, utilize colors, and aren’t afraid to look old-school.  In fact, it’s a refreshing change of pace when compared to the way guys approach dressing up.  Don’t be afraid to stand out!