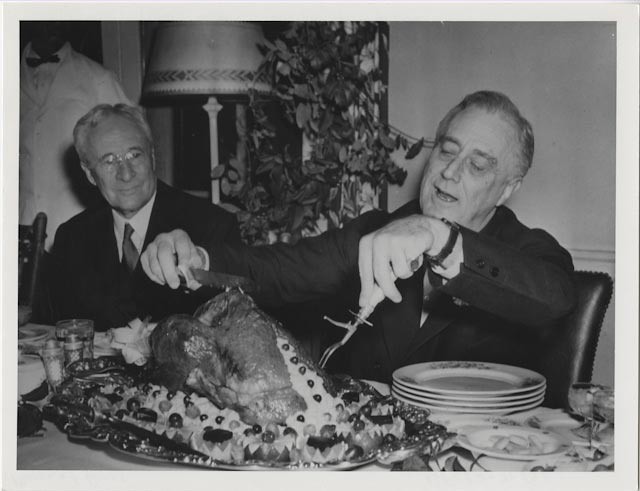 There’s nothing more fall than tweed!  This past weekend, I was able to enjoy not only a dinner with my family but with my friends.  My outfit for the family party was casual, but I was able to break out the old tweed suit for a dinner party hosted by my pals, Spencer and Jay.  Us three got into the spirit of fall by wearing some dope tweed outfits!  We’ve got all three variations of tweed in here:  herringbone, fleck, and glen plaid! Check them out. 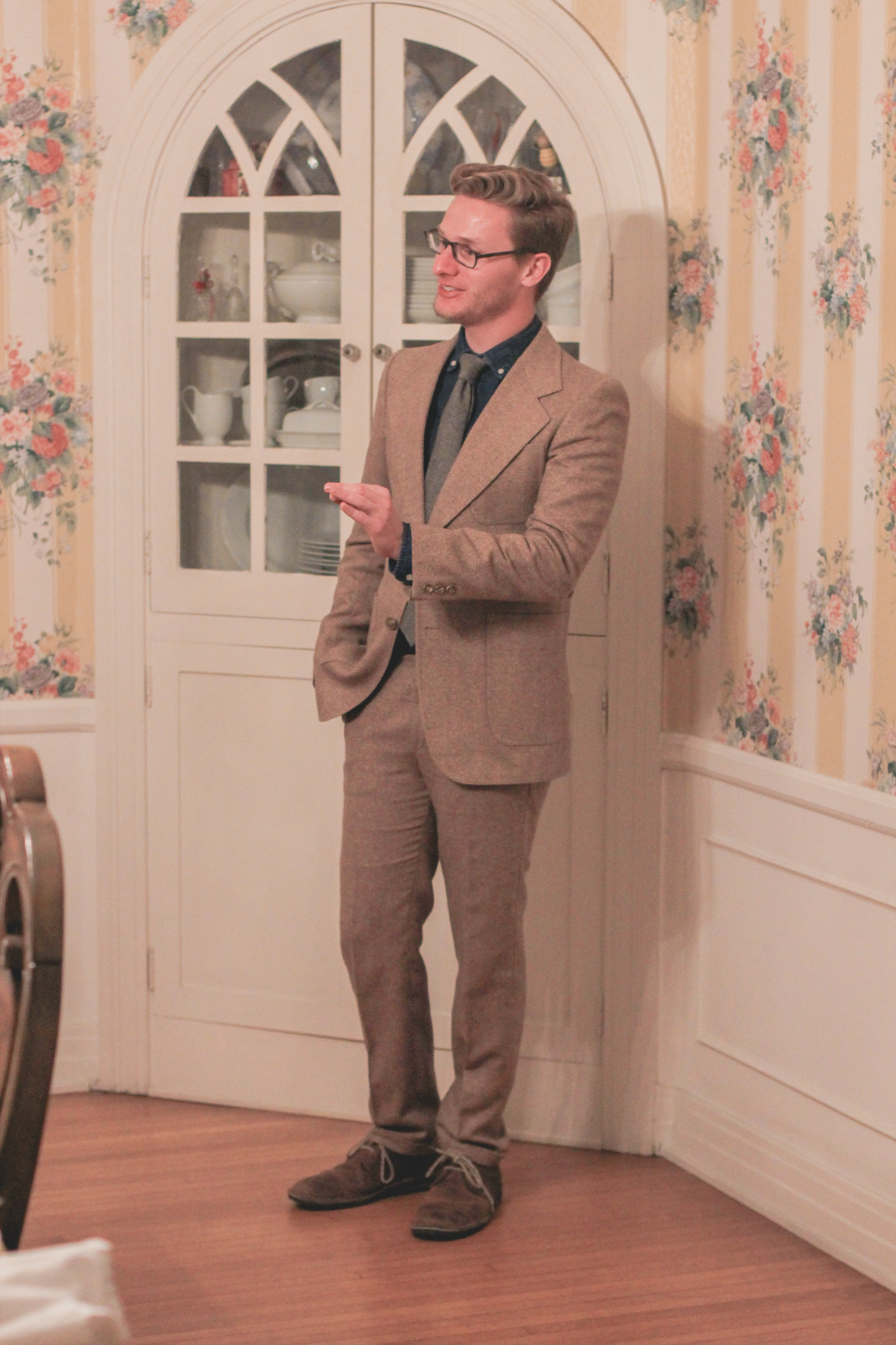 First up is Jay! You can always count on him to mix vintage with modern and make it look definitely 2015.  He’s got a full tweed suit form the 1970s. which he paired with a denim shirt and a diagonal herringbone suit.   There’s nothing like mixing patterns and textures to really set your self apart from the rest.  Just look at how each item mixes with each other.

His tie in particular is interesting.  Its still a herringbone design, but look at how the chevrons (little arrows) are smaller and point in a different direction than the ones on the suit!  Sneaky details like that allow you to wear variations of the same pattern in one outfit. 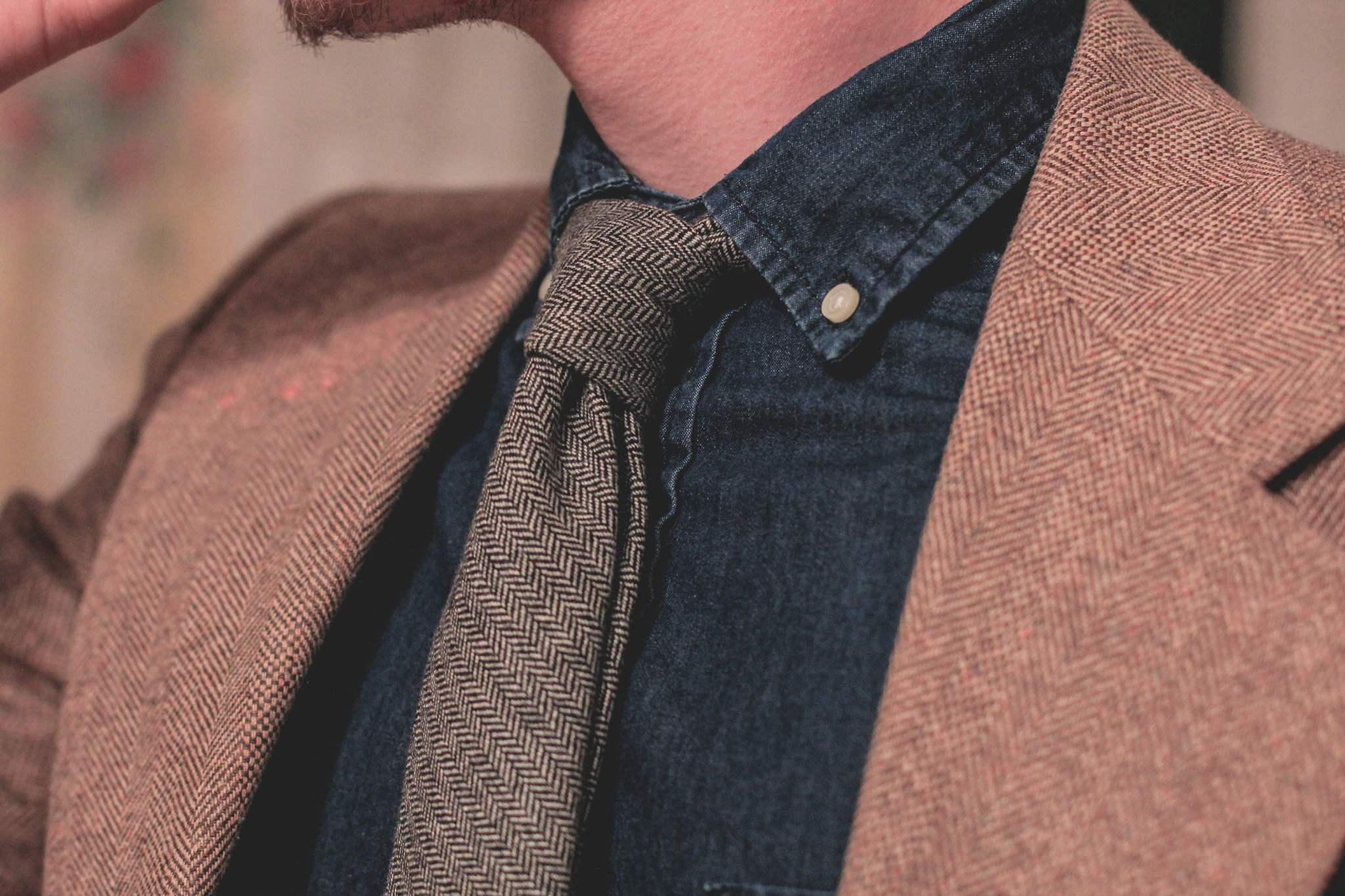 Now you might be wondering, “Hey Ethan, how are you so sure it’s a 1970’s suit”?  Well just look at the details.  He’s got giant notch lapels (that completely cover the breast pocket), prominently padded shoulders, giant patch pockets, and a nonfunctional belt back.  We’ve seen movable ones before, but the 1960s and 1970s made the transition to just using the belt-back for aesthetic rather than actual use.  Amazingly, this suit used to have crazy bellbottoms, but Jay was able to tailor them and turn them into a normal pair of pants. 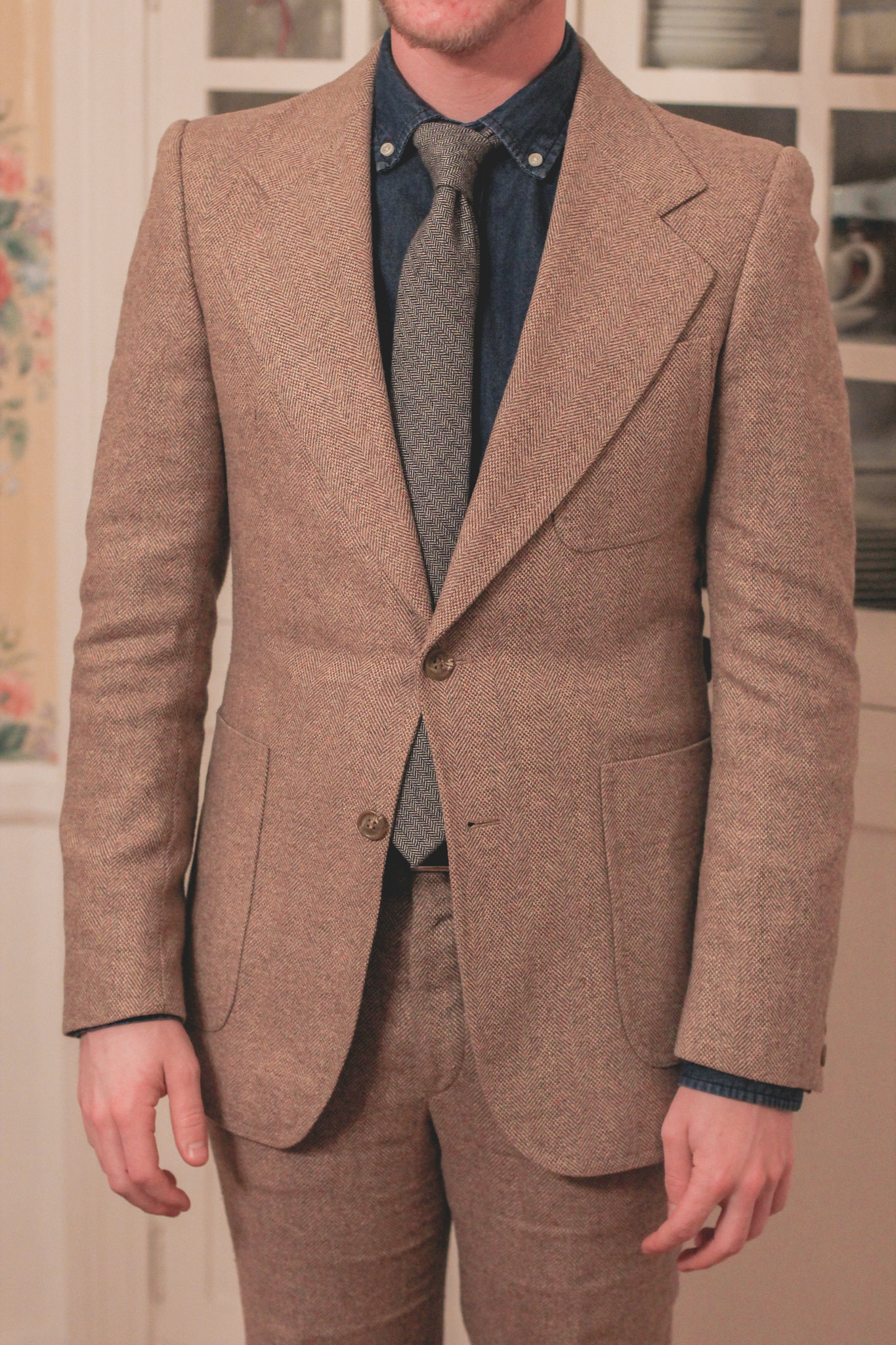 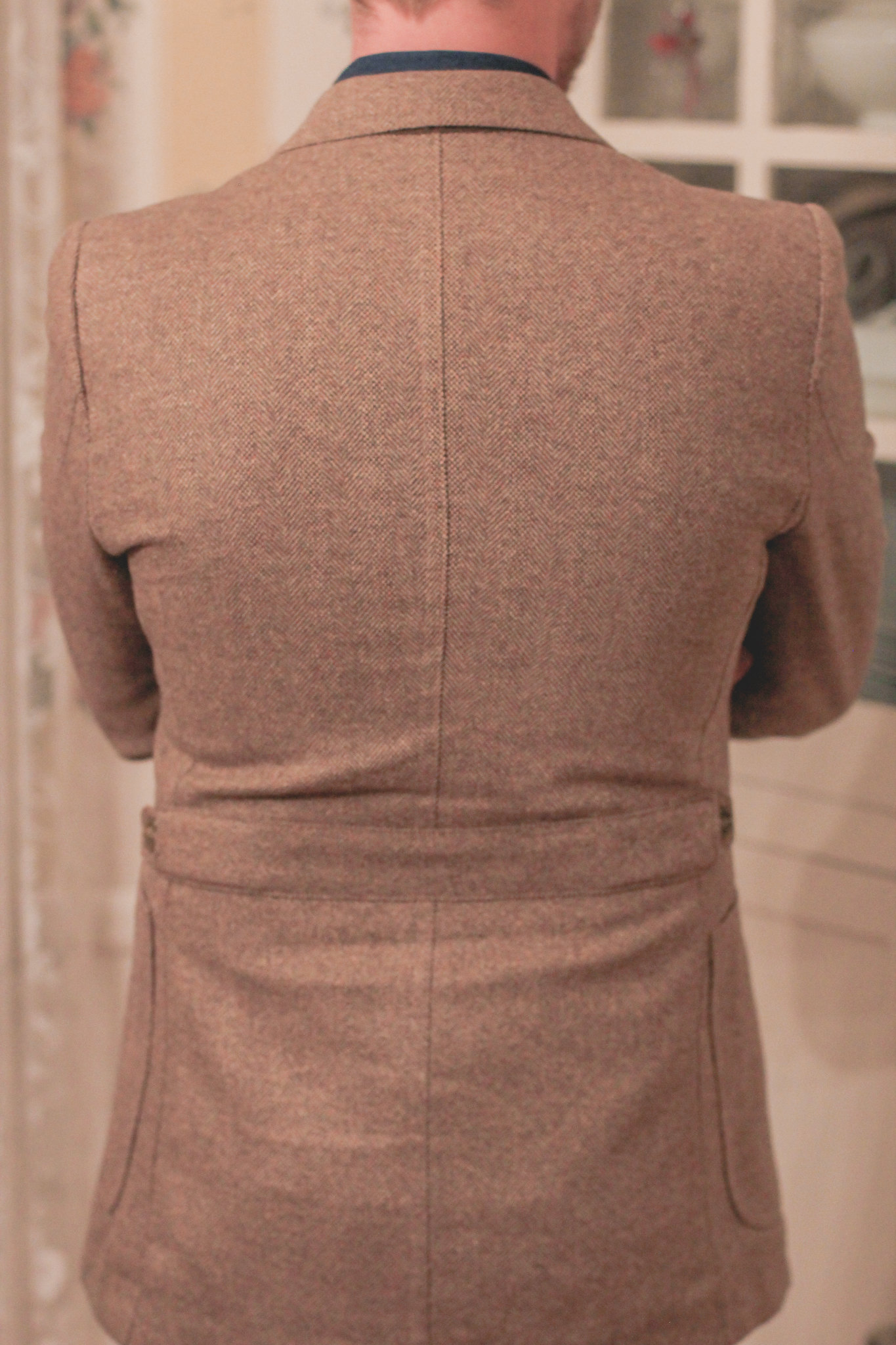 Jay’s easy going demeanor is definitely shown in his outfit.  A true, well-dressed gent can take a suit and turn it into something simple and casual. 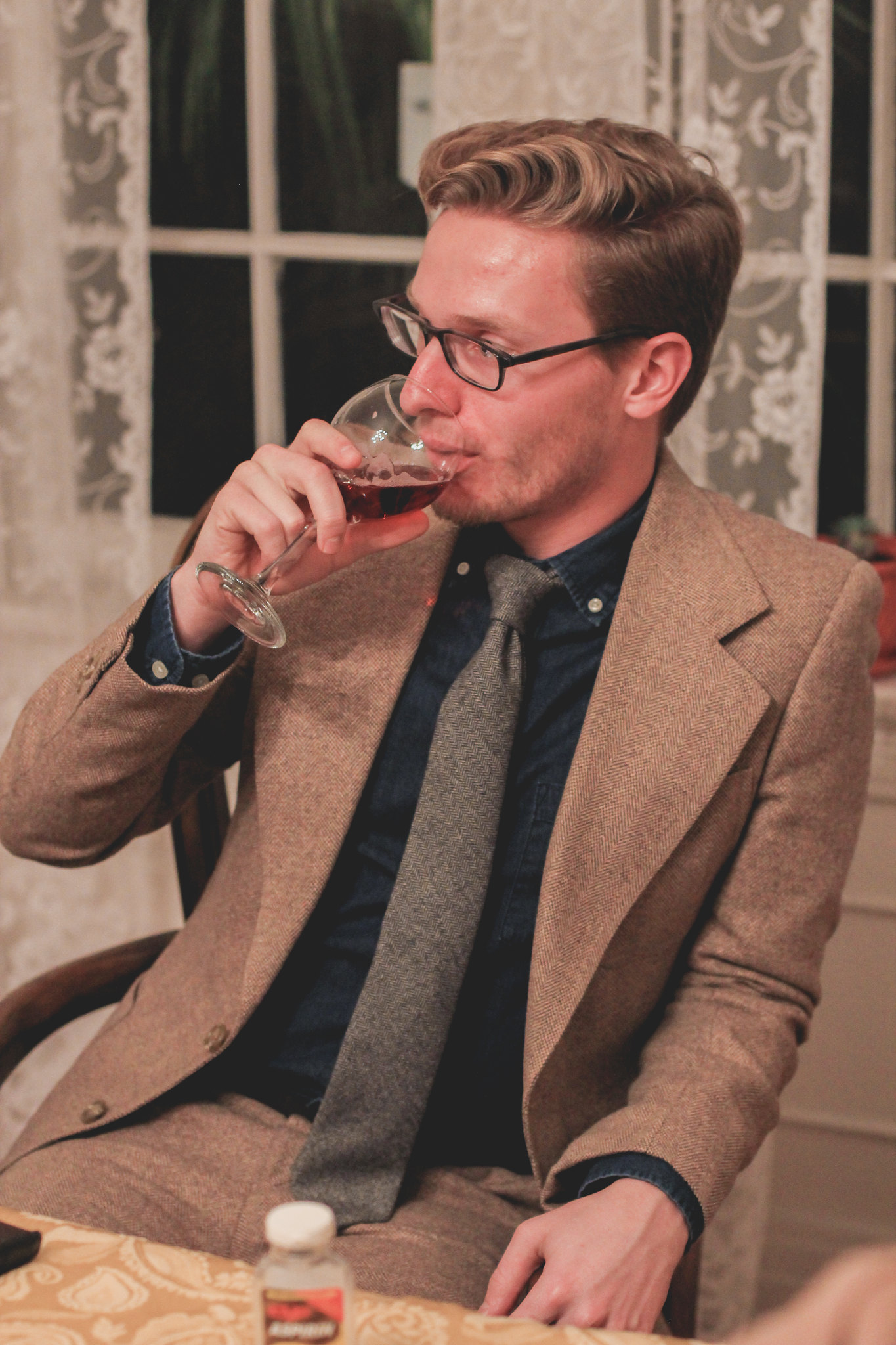 Instead of going with some Timberlands with a suit like George Costanza, Jay wore some chukkas with his outfit.   Your shoe choice is also critical for how formal or informal your outfit can be! 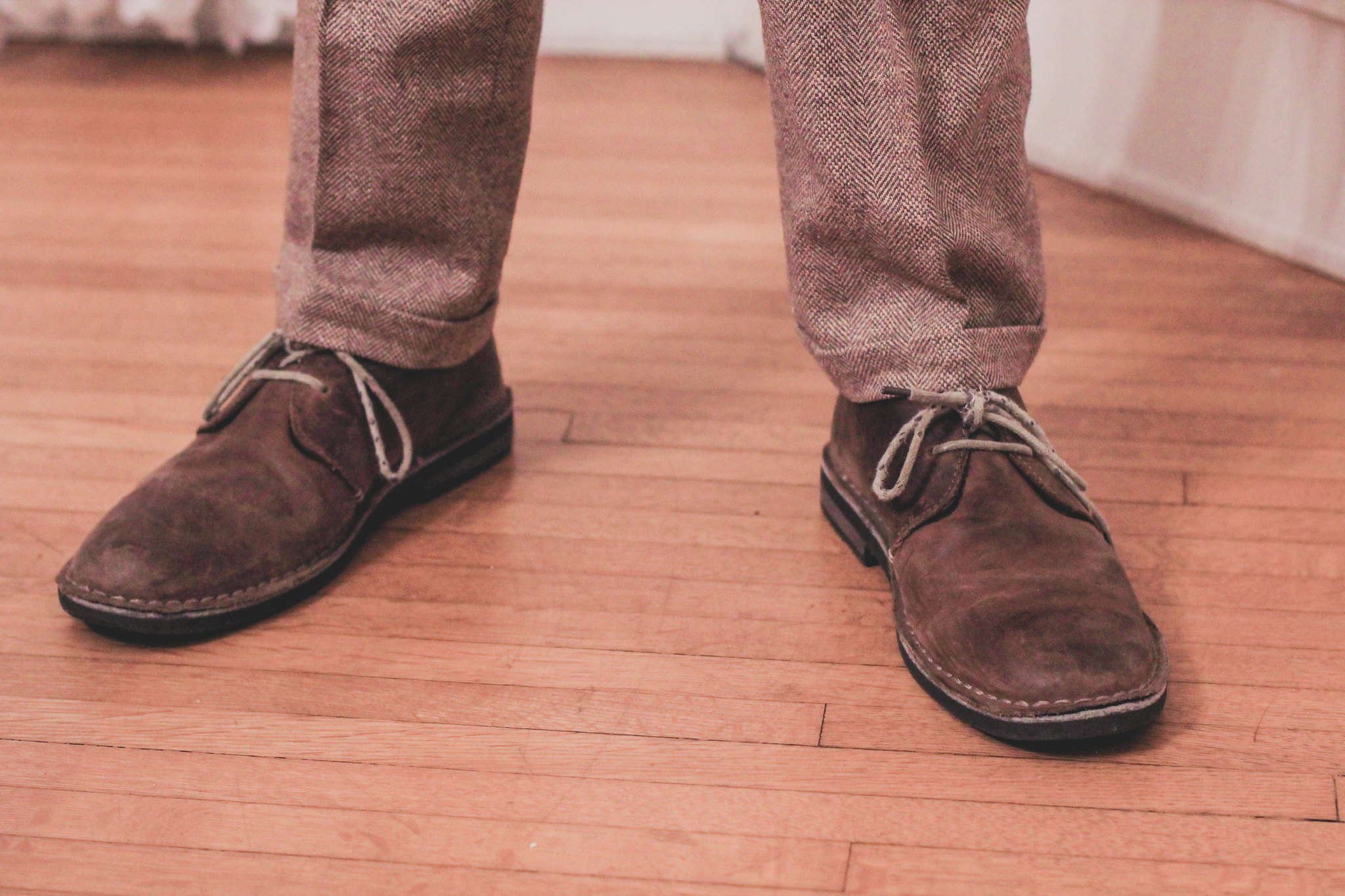 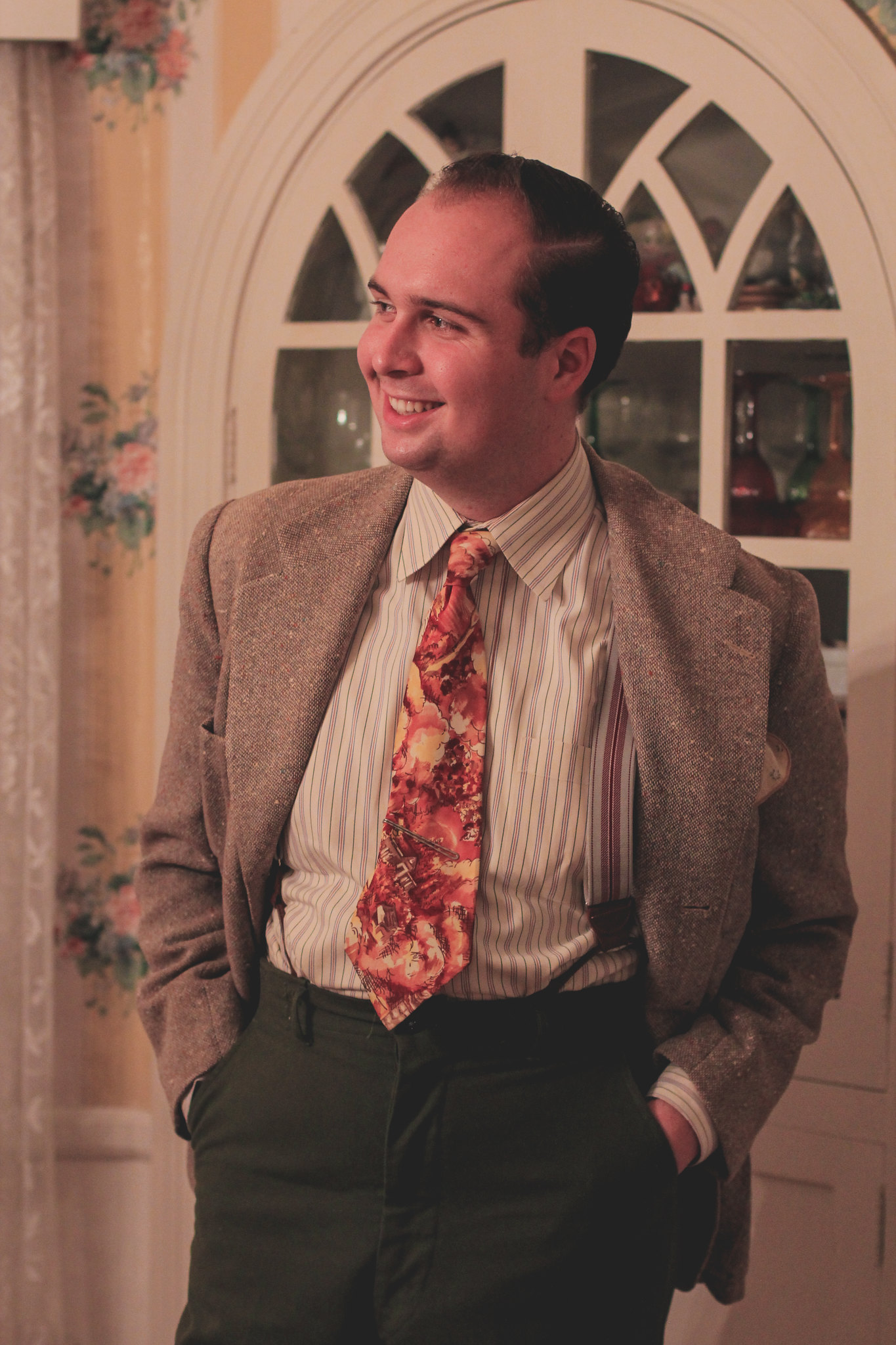 I think Spencer is the King of Fall.  His entire outfit is made of fall colors: green pants, white-striped shirt, orange tie, and an epic flecked 1930’s jacket.  If you ever want to stretch your sartorial muscles, try wearing a sportcoat and separate pants.  It’s a lot more creative than wearing a suit where both of these items are already chosen! 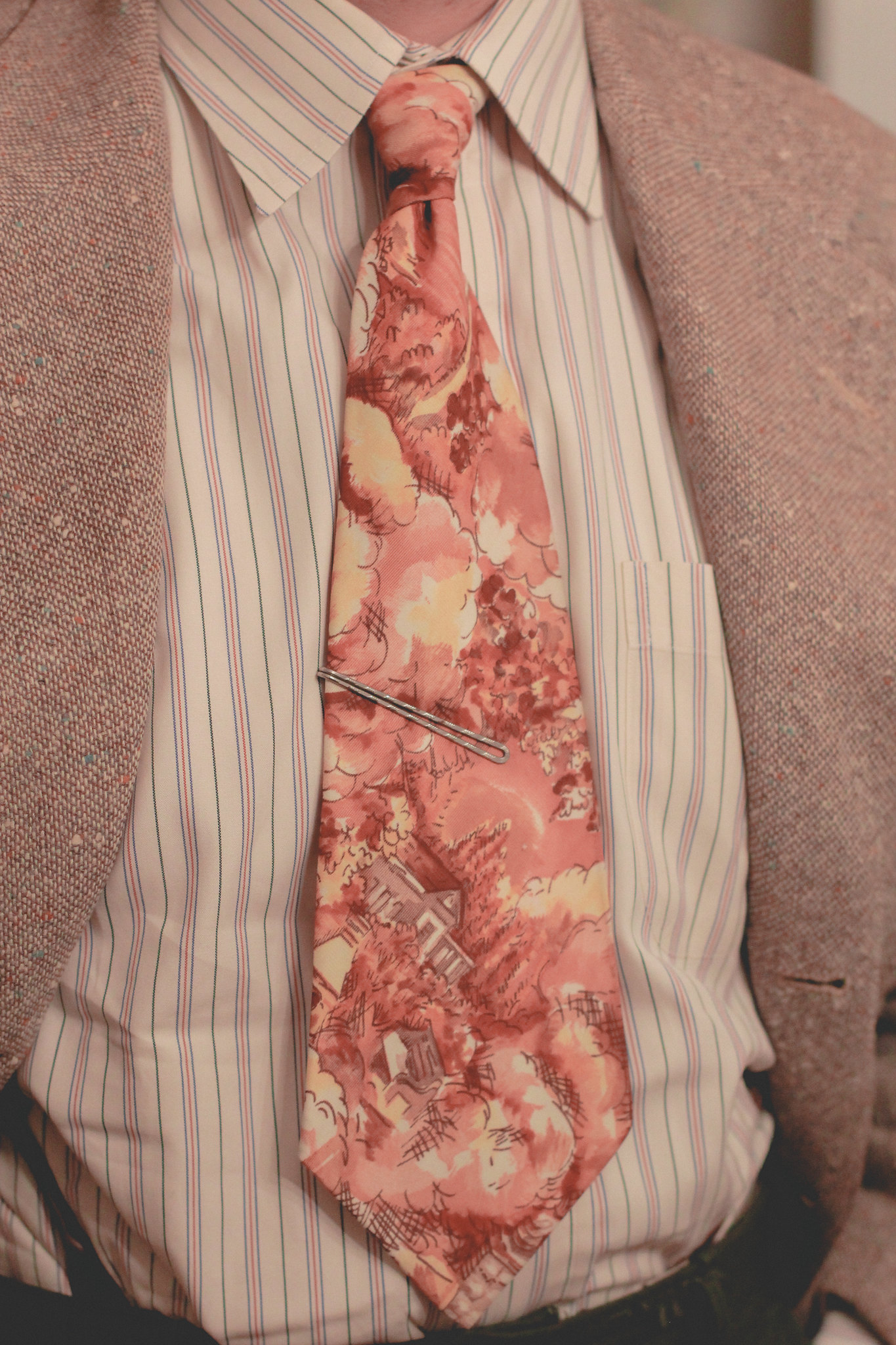 Check out Spencer’s tie.  It’s an entire fall scene right on the tie! The 1990’s tried to do artwork on ties only to fail miserably.  Just stick to 1930s-1950s handpainted ties to get some awesome art around your neck. 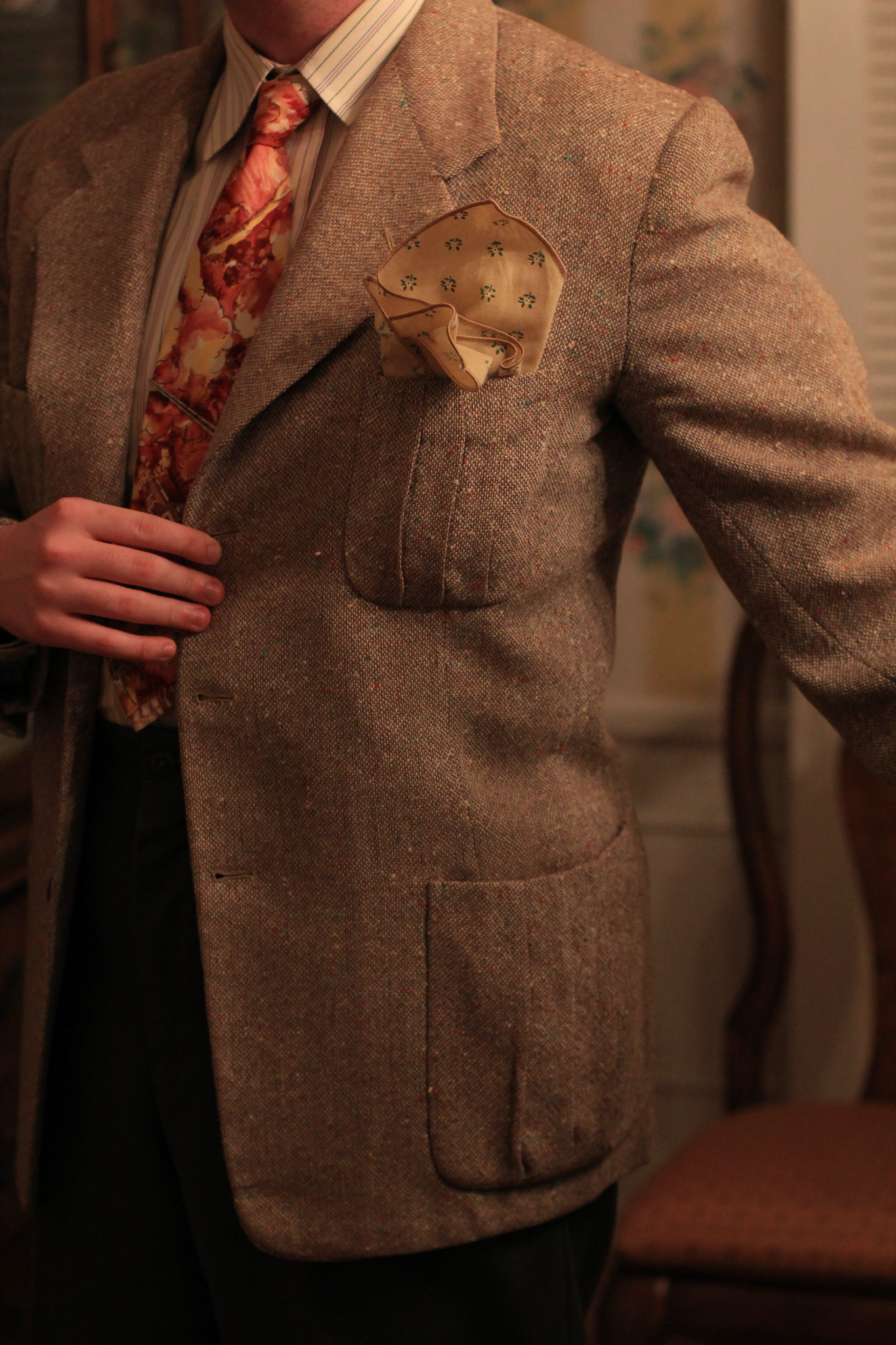 Whoop there it is, Spencer’s 1930s quadruple-pleated patch pocket sportcoat.  These are details one absolutely cannot get anymore.  People complain about suits or sportcoats being boring, well why not try vintage?  Just look at these pockets! 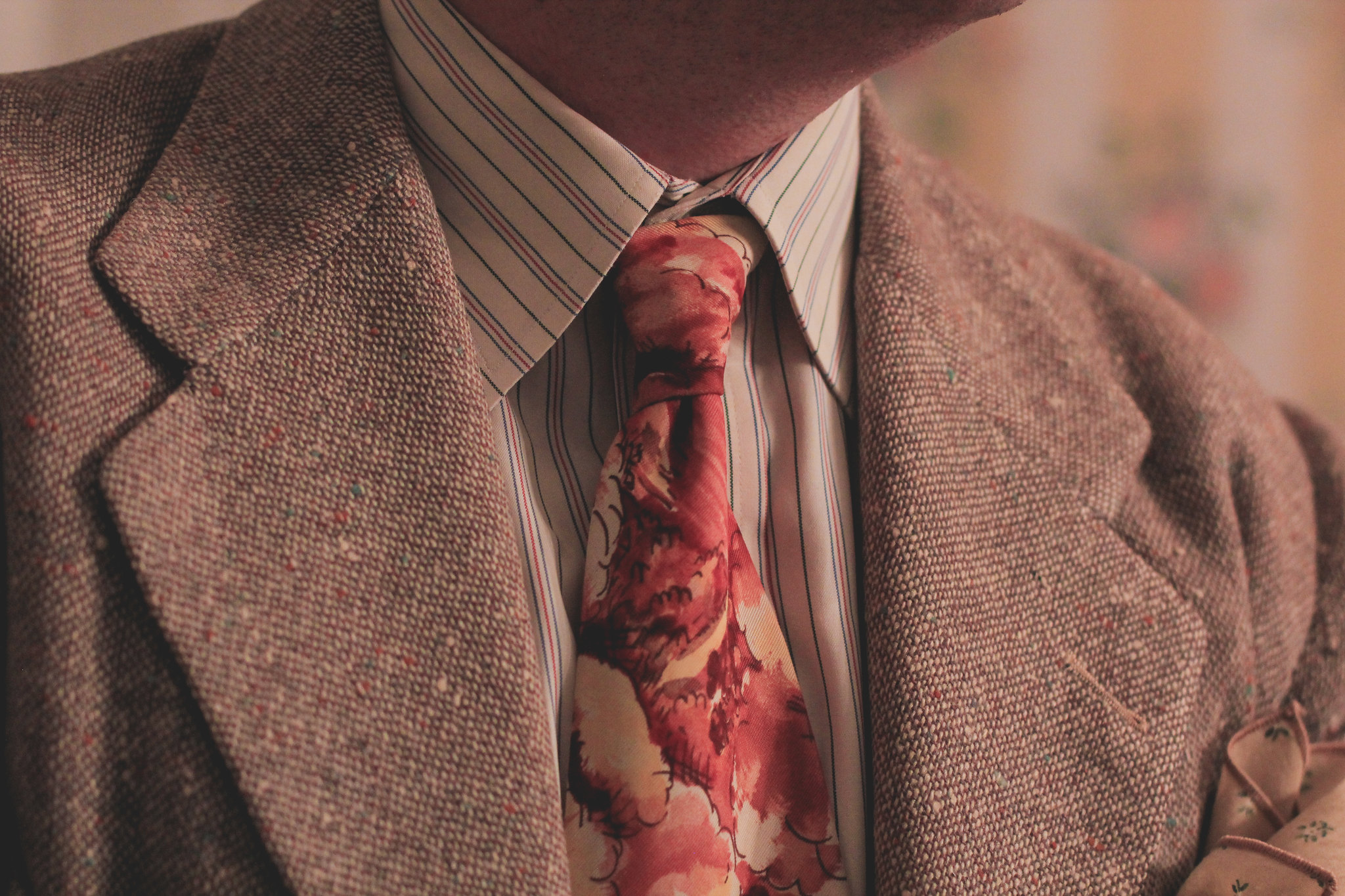 While you’re at it, look at that fleck! His jacket has little pieces that are green, yellow, and red.  I think someone’s in the mood for christmas 😉 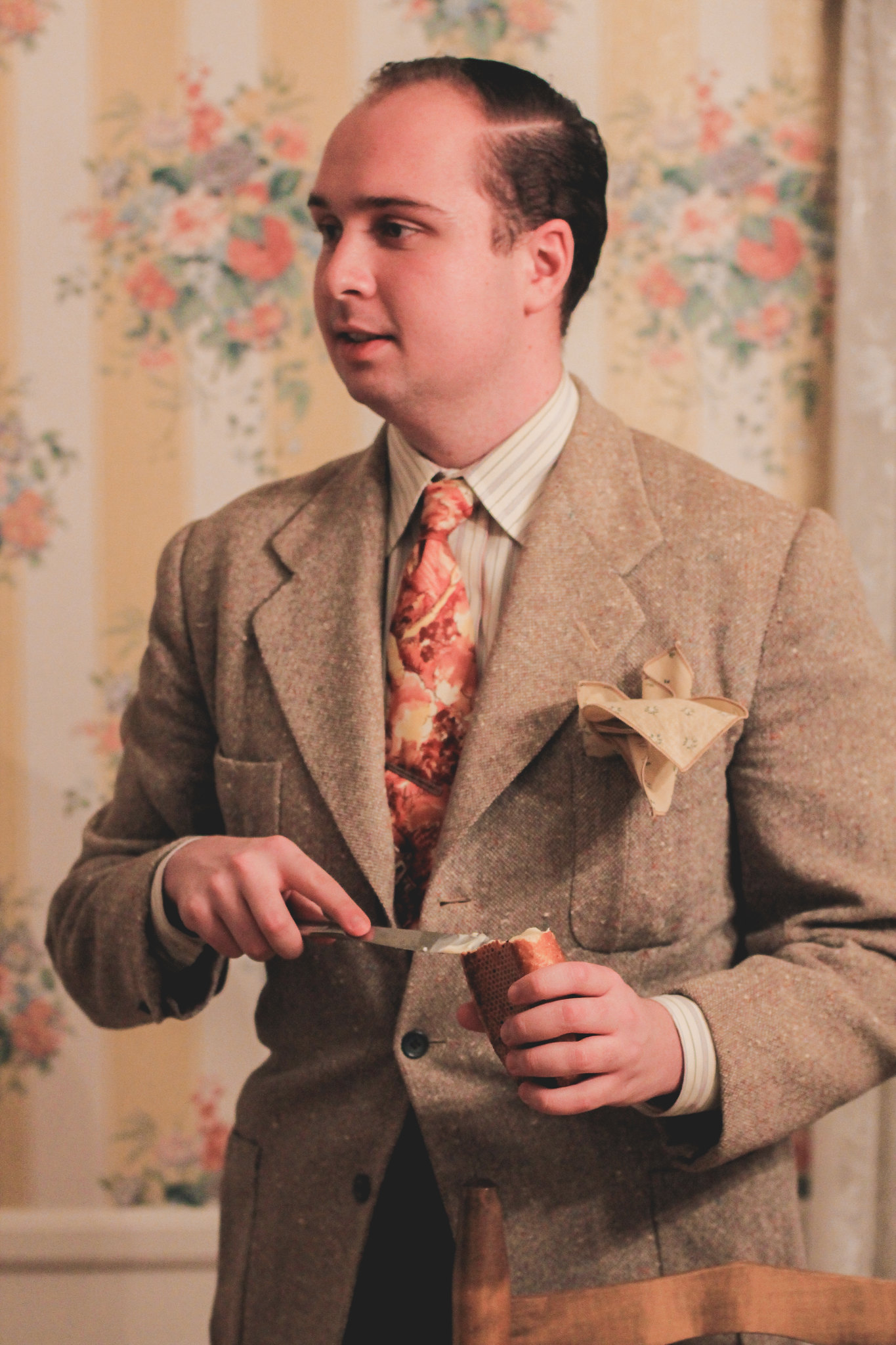 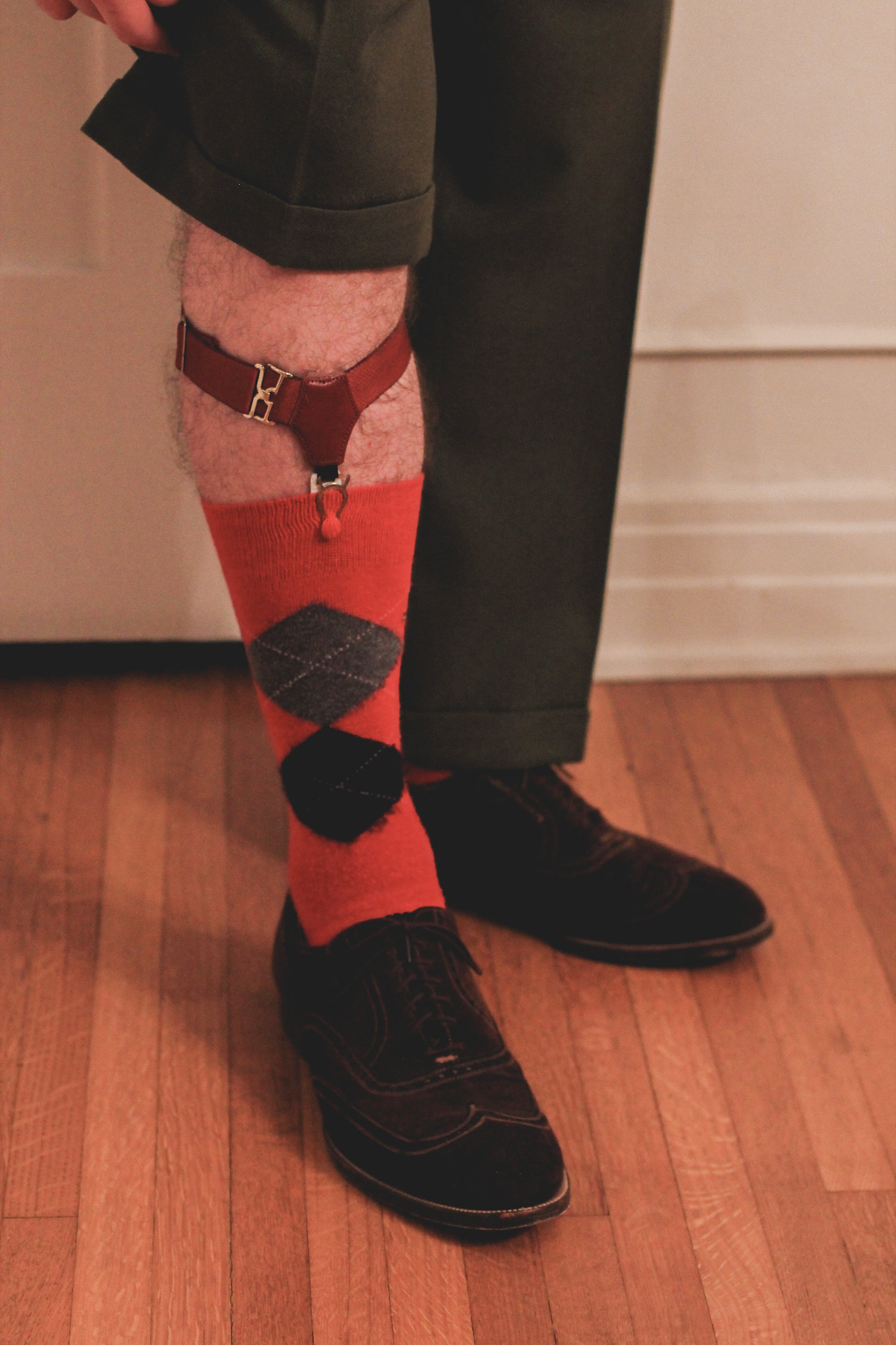 The shoes are awesome on their own, but the sock garters add the extra mile.  I have large calves and stretch out my socks frequently, which lead them to sag at my ankle.  If that happens to you, try some sock garters! They’ll keep your socks up without needing constant adjustment!  However, these simply don’t just work with slim pants. 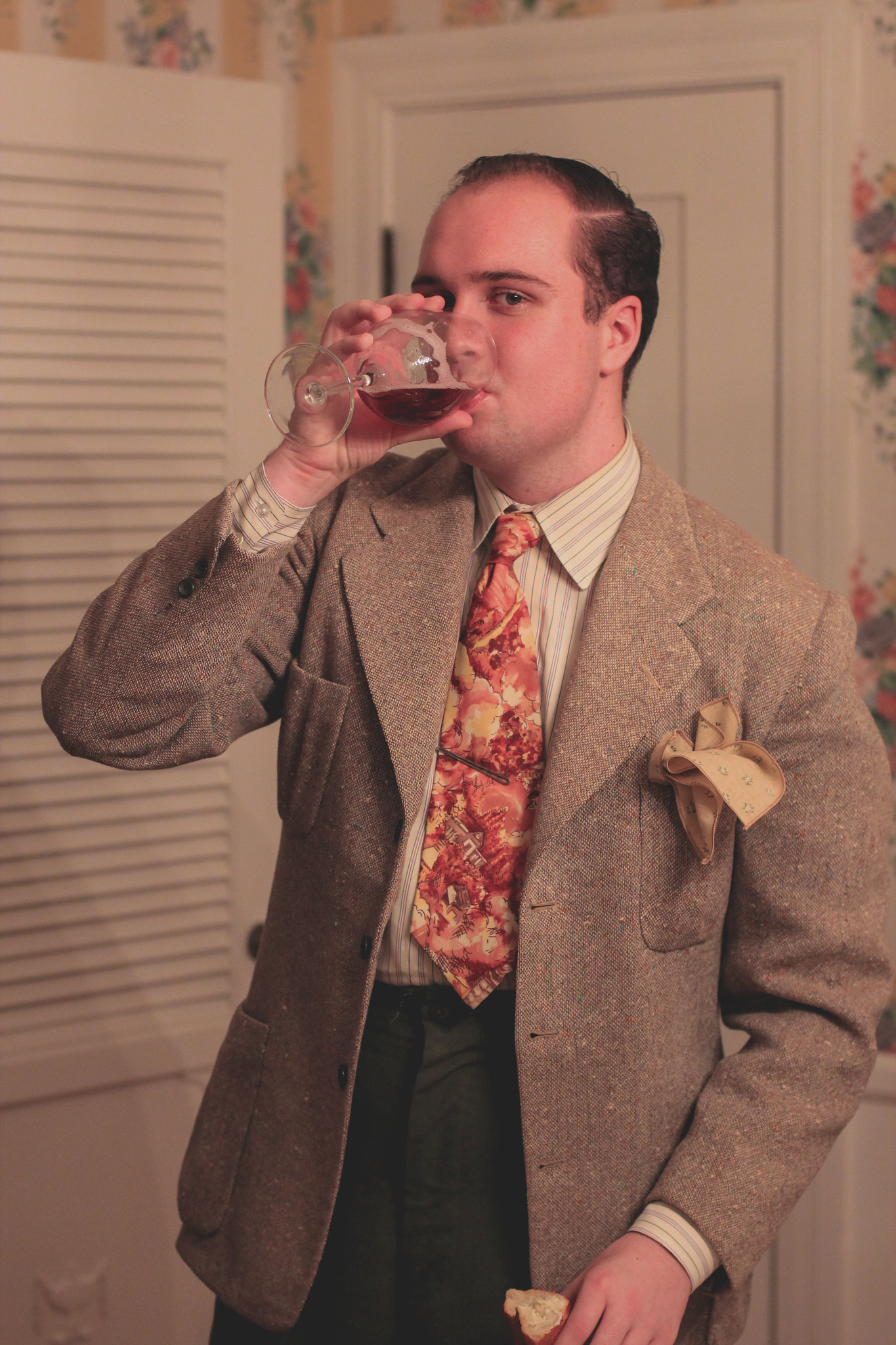 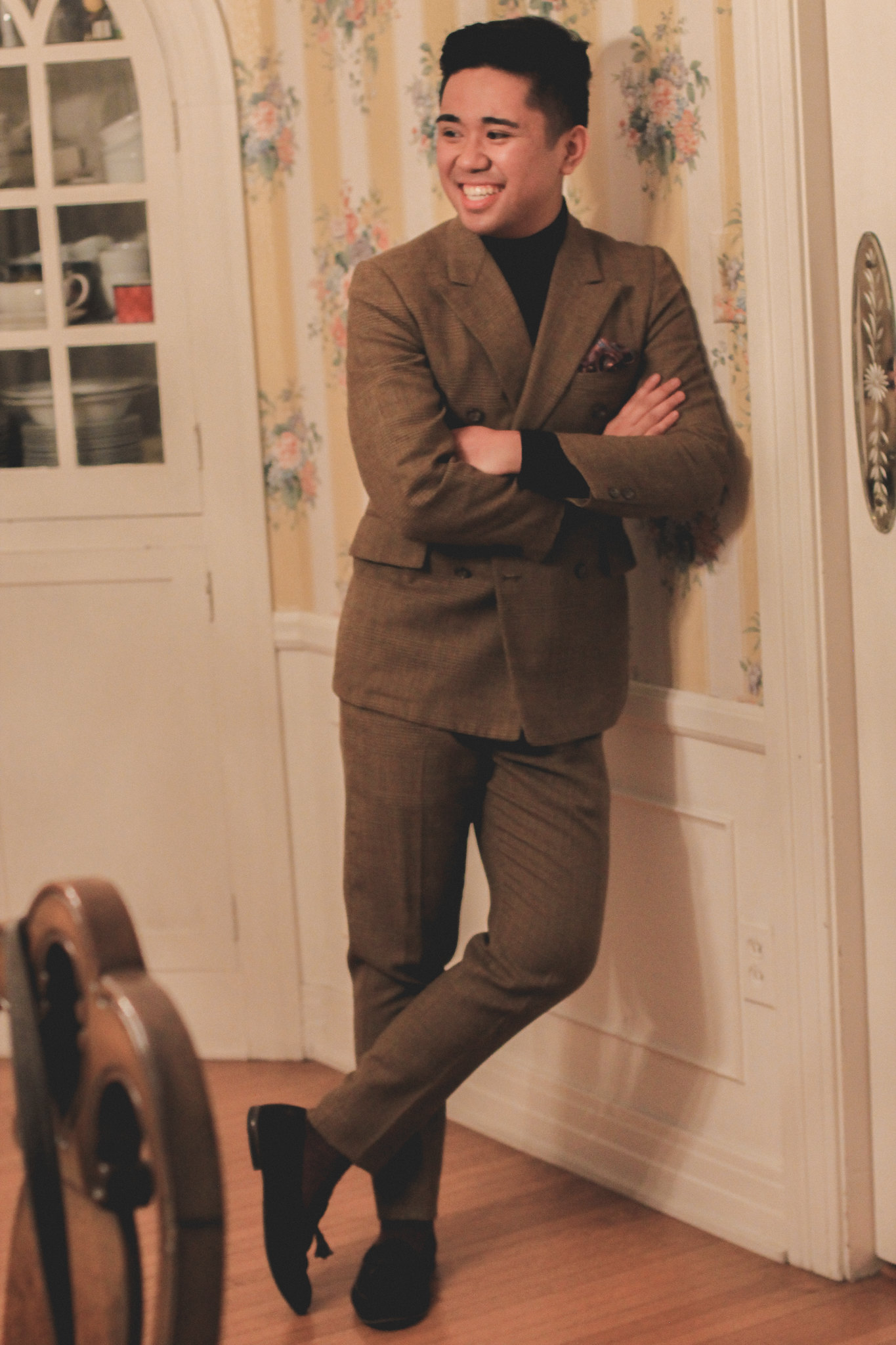 Unfortunately, I don’t have many details to set myself apart from the rest. I just have  a 1960’s double breasted glen plaid suit, a turtle neck, and some tassel loafers.  It’s a great minimalistic look that can make you look sophisticated, since everyone will think you’re a psychiatrist.  Go figure. 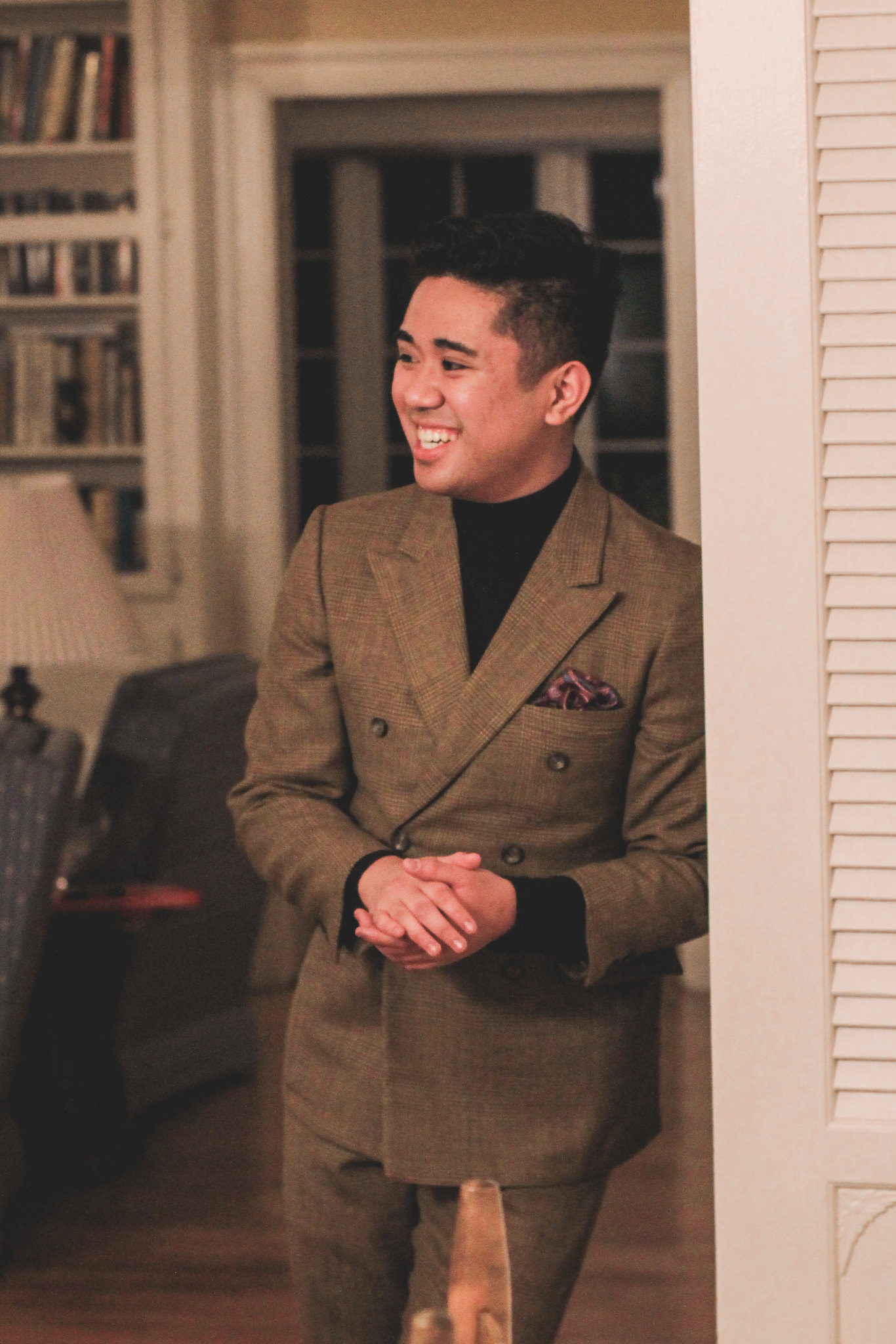 Like Jay, I don’t have a variety of pieces in my outfit, but the suit does the talking for me. It’s a brown tweed with a herringbone plaid, overlaid with a subtle green windowpane. If you have a glen plaid suit, you’ll have three stand-out pieces: a statement suit, a statement blazer, and a pair of statement pants. 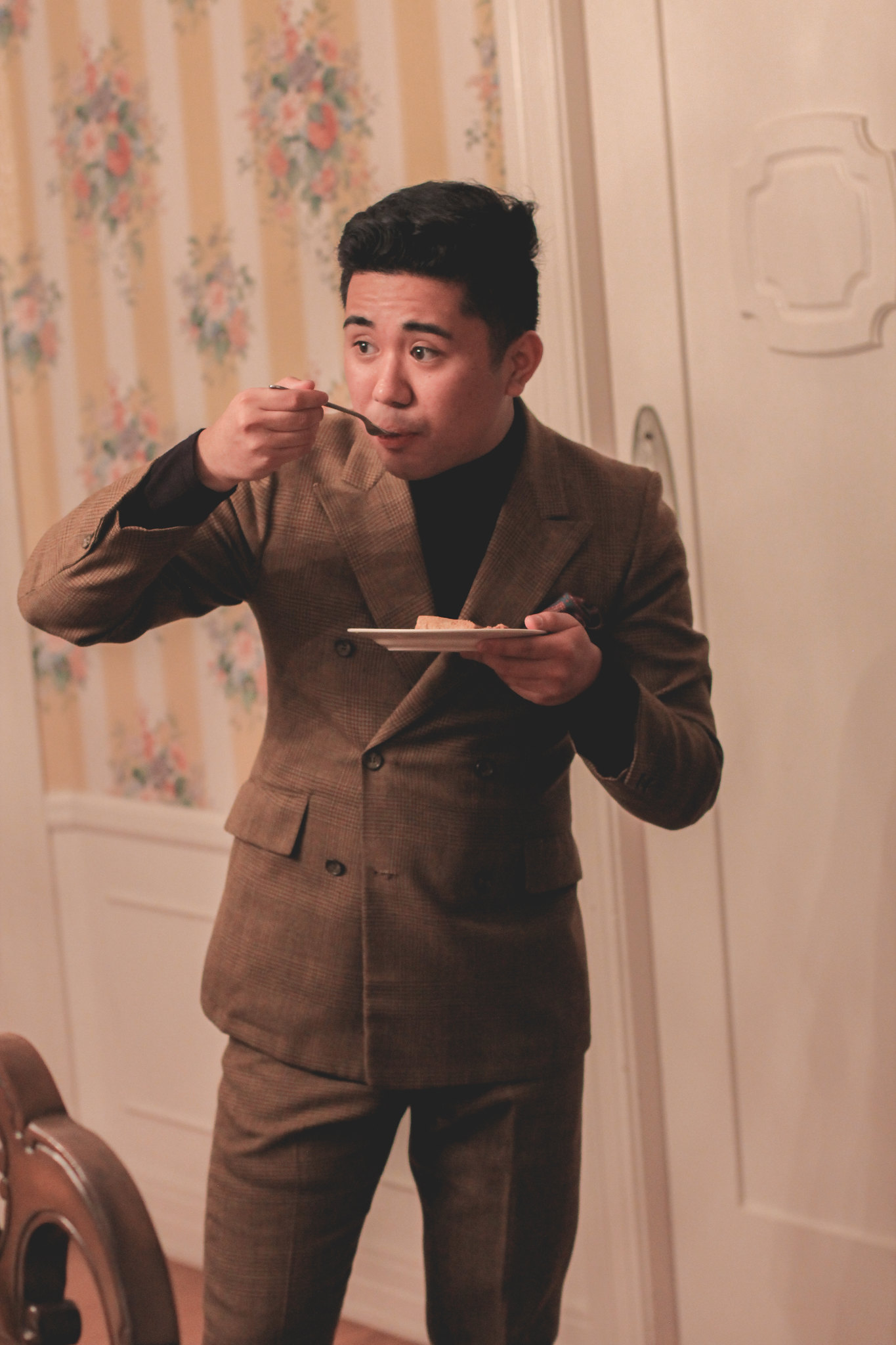 When you have a suit and a solid-grounded shirt, you have to use your pocket square to add that special pop! 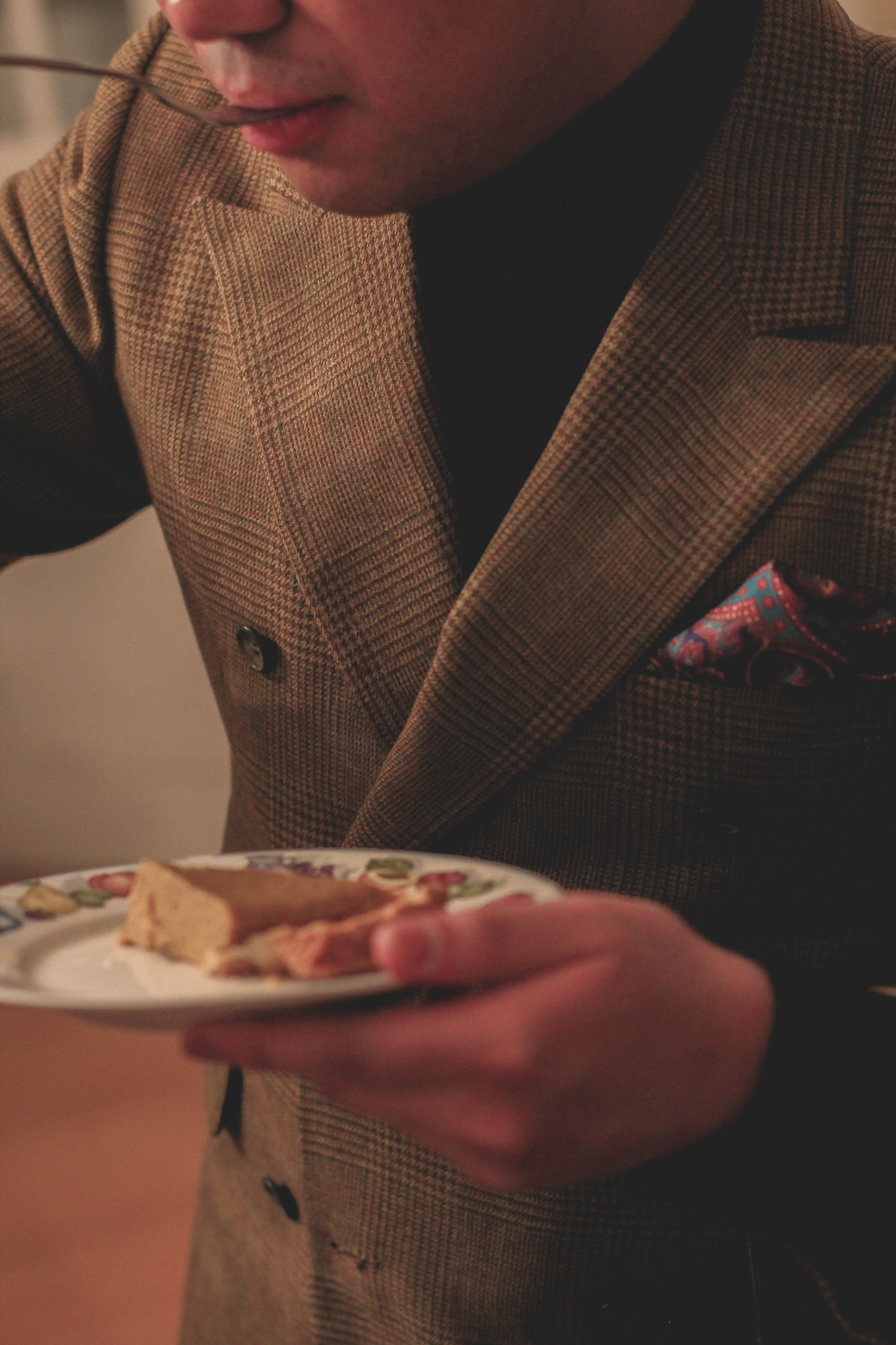 Since it was a dinner party, I decided to go with suede tassel loafers rather than my go-to cap toes. The overall nature of loafers is lazy elegance: its sophisticated to have suede tassels, but you can just freakin’ slip them off when you’ve had enough of them. 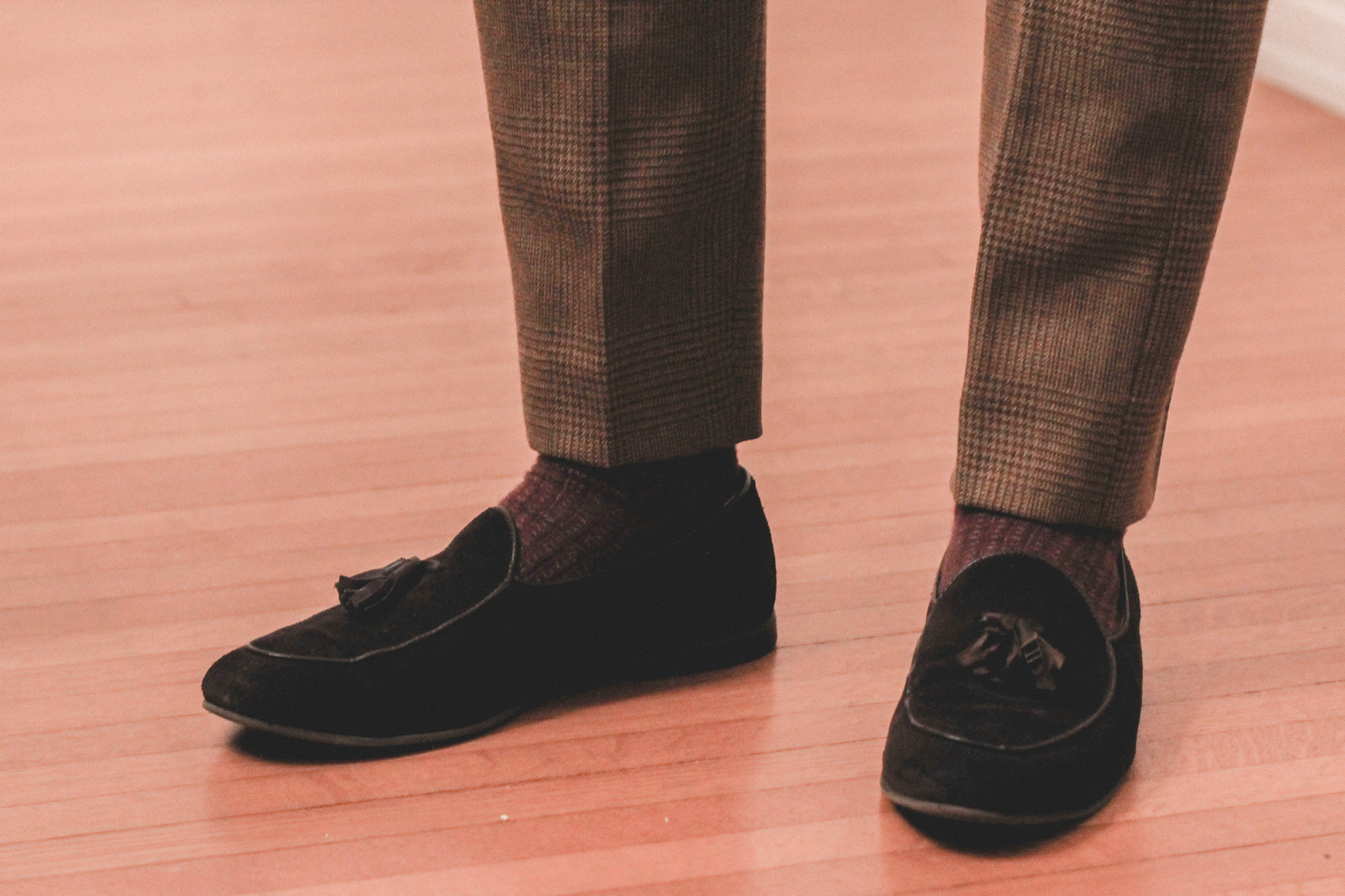 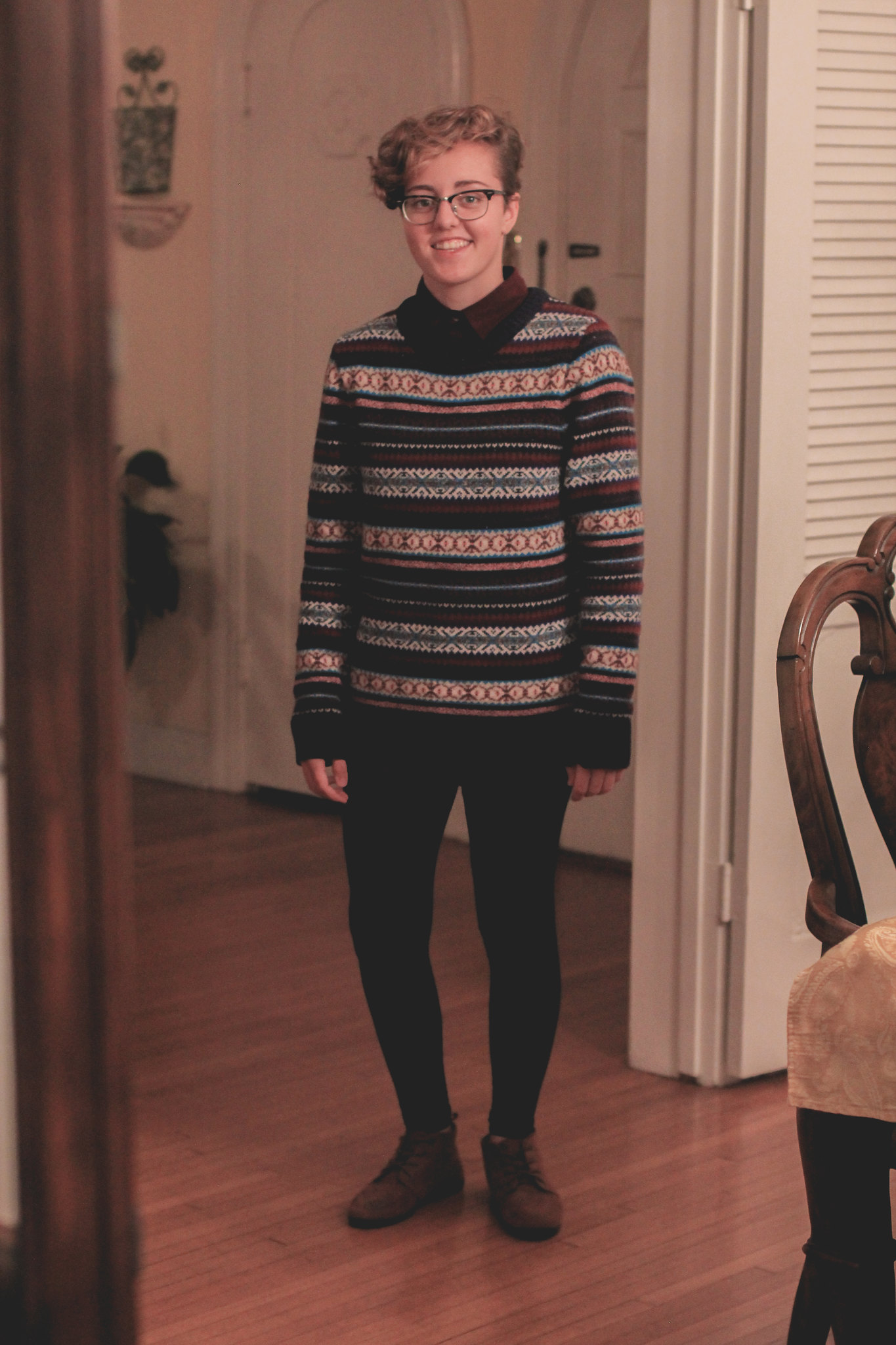 Surprise! I decided to include Bronte in this post because her outfit was just amazing. She joins Spencer and I with her own pair of suede shoes. Looks like she got the memo for the dress code. 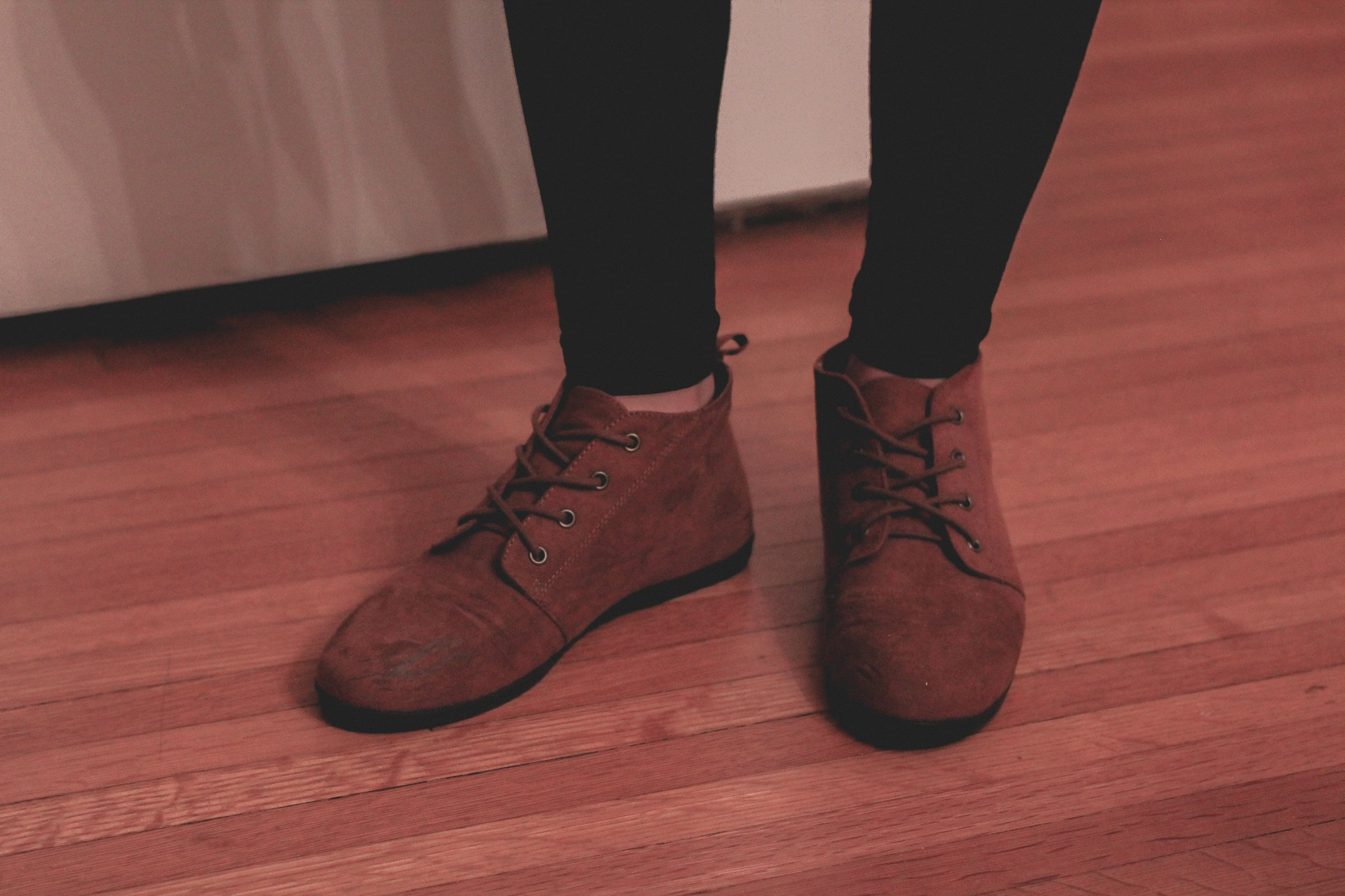 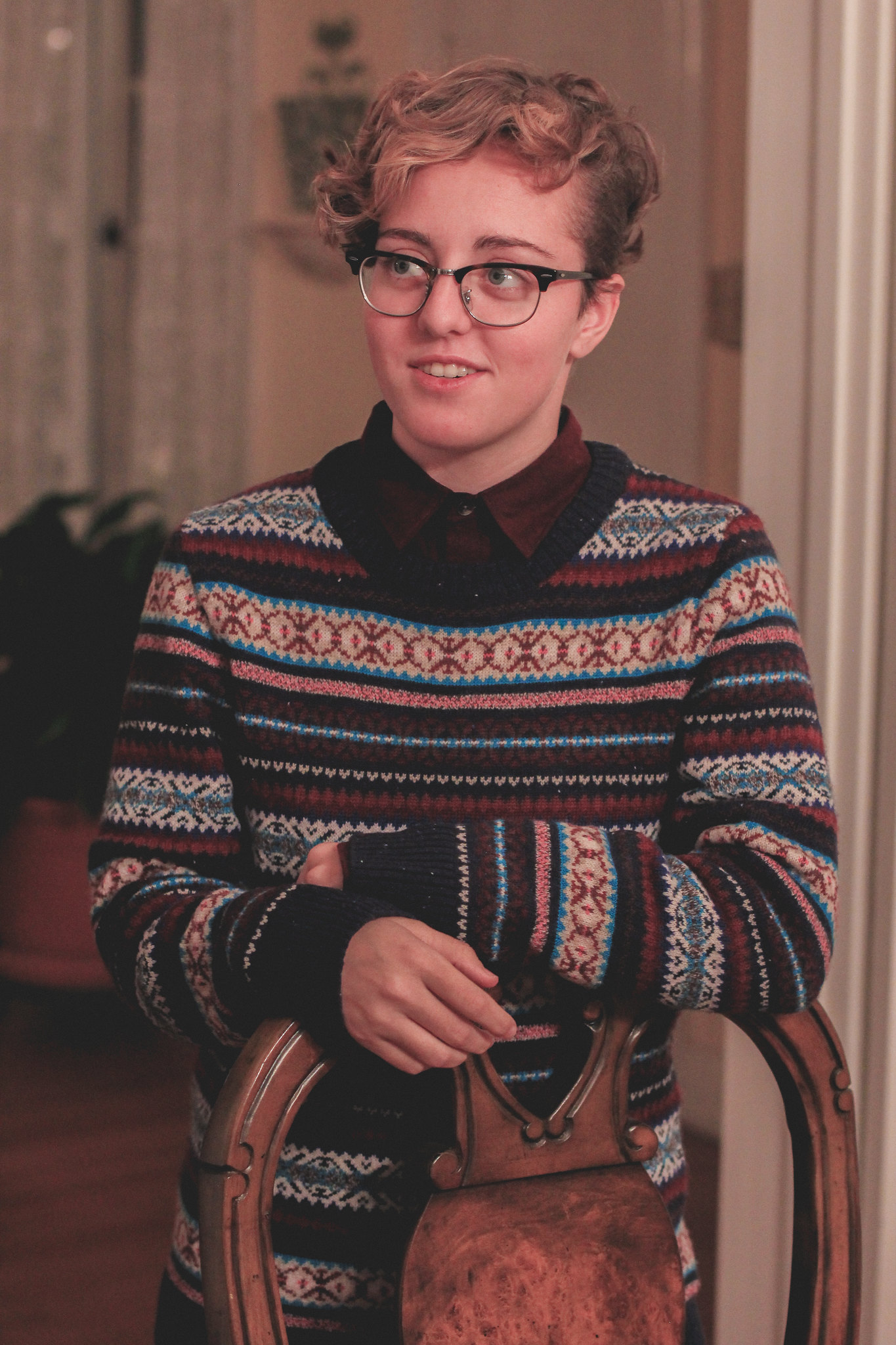 What makes Bronte’s outfit stand out is her awesome Fair Isle sweater. It’s a classic pattern that comes in both sweater and sweater vest varieties. I personally love wearing it with my suit! She went more casual and wore a simple button-down under the sweater. It’s comfy and fits right in with our fall outfits! 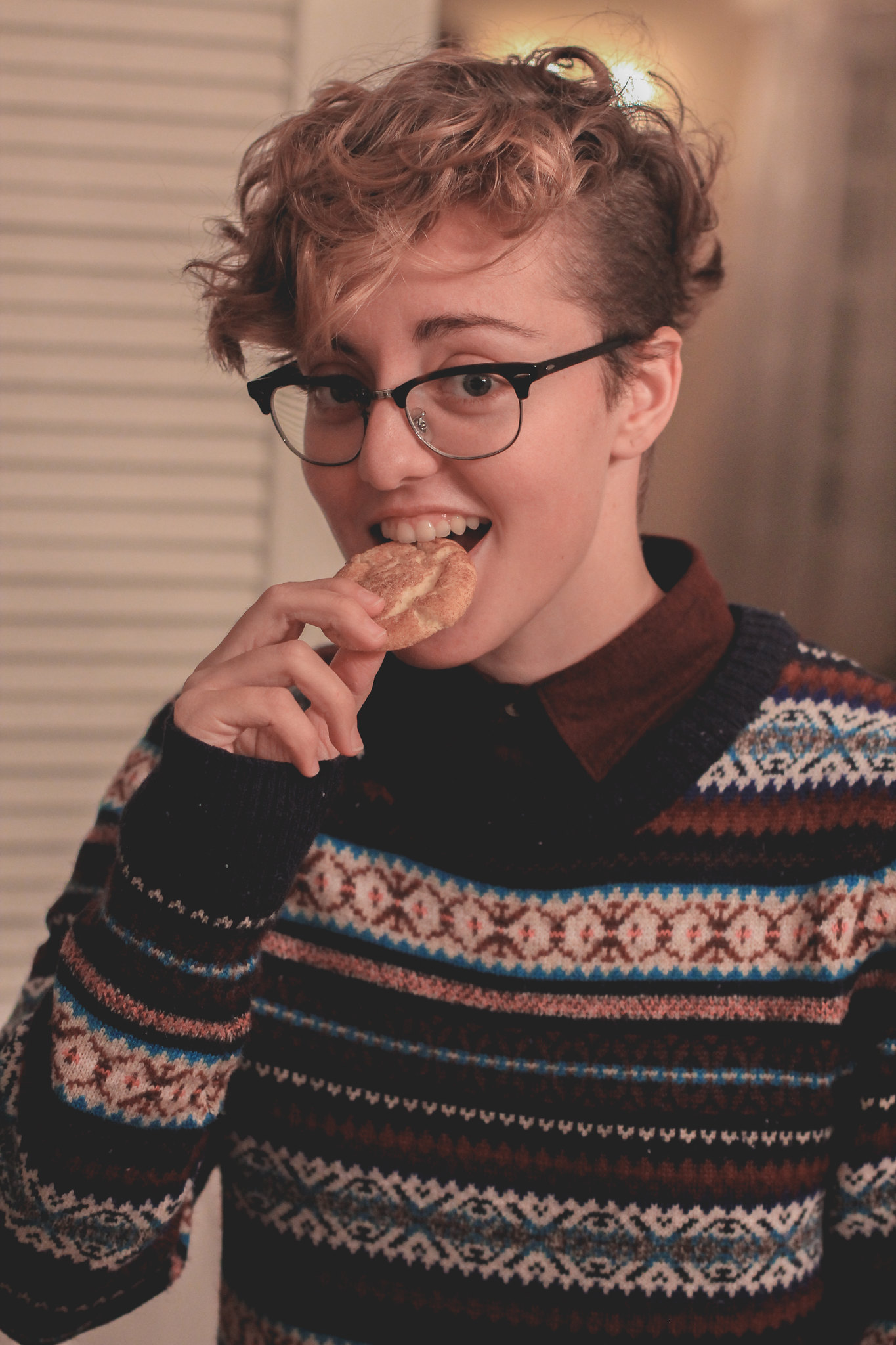 From all of us at Street x Sprezza, we hope you had a wonderful Thanksgiving! 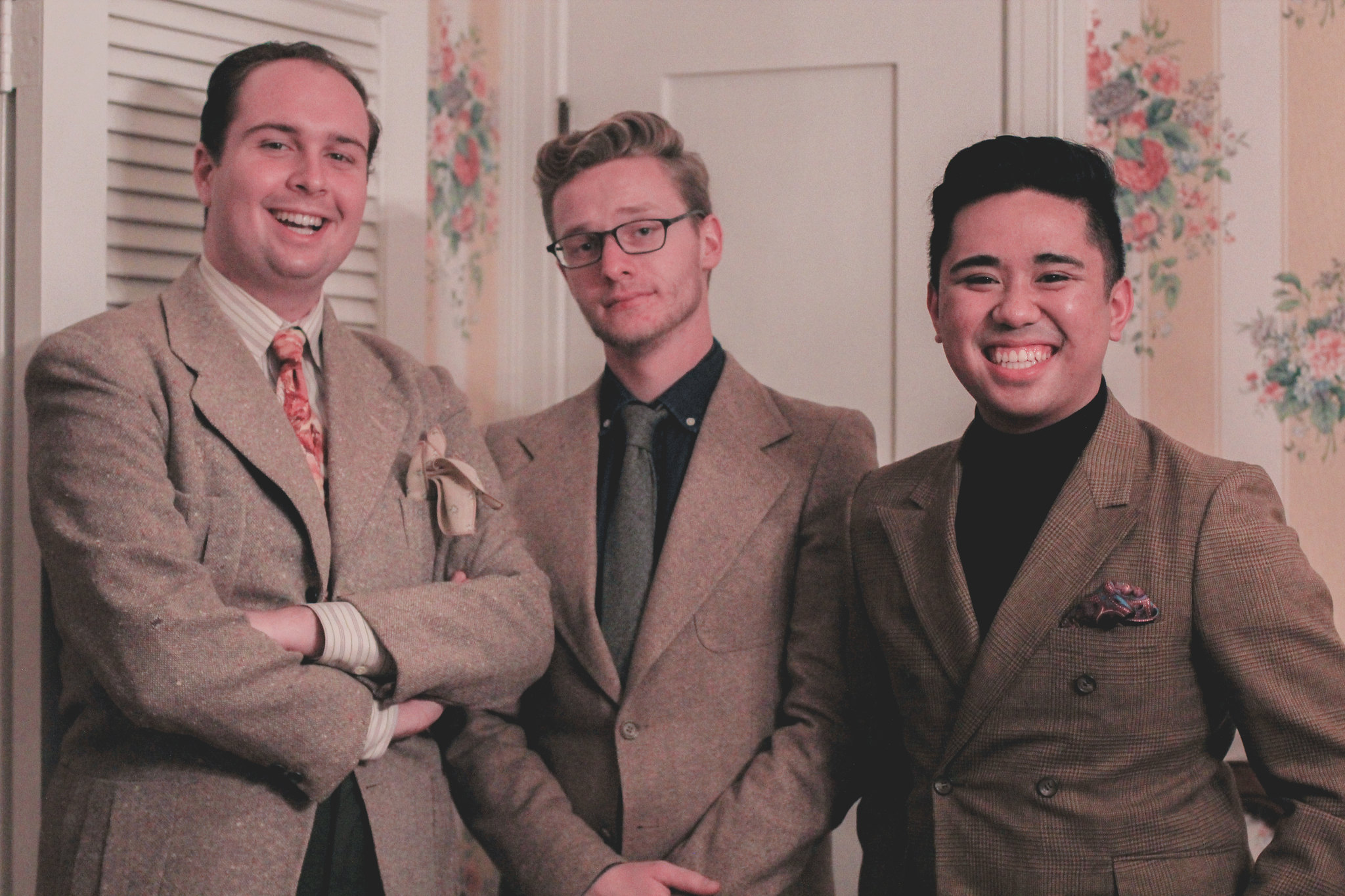