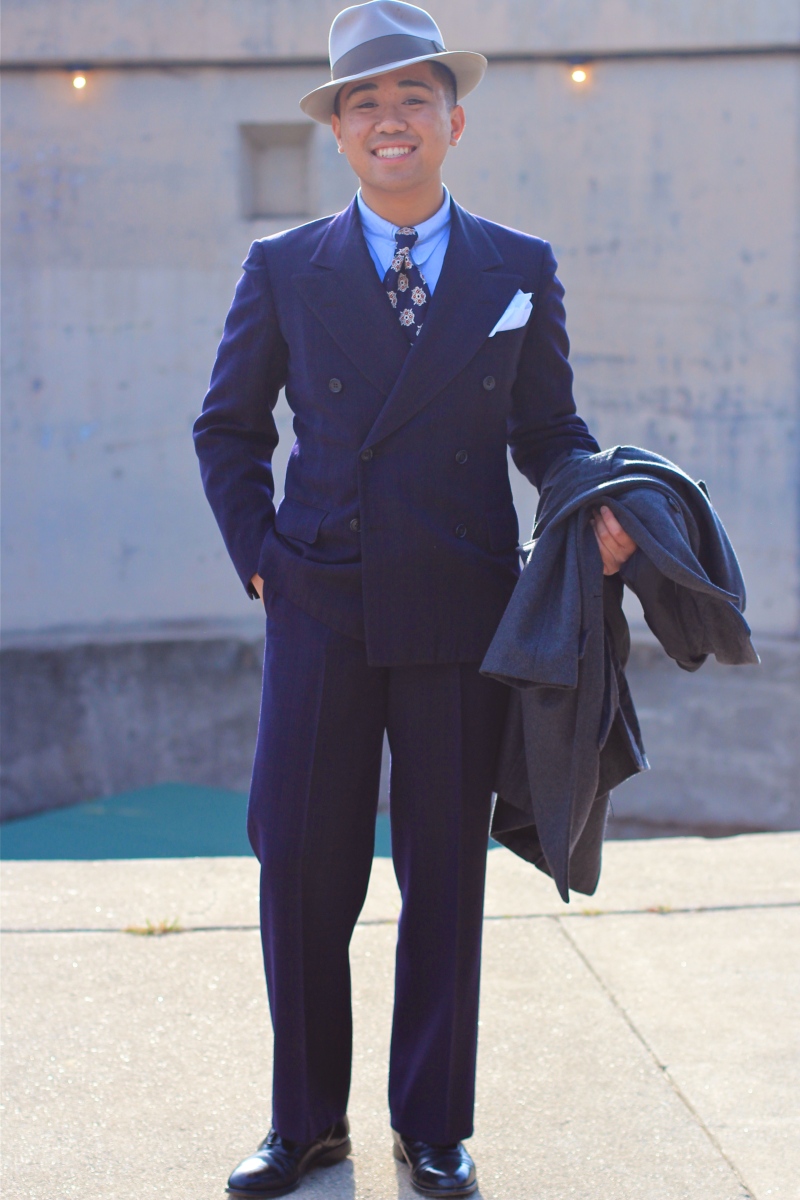 Here, I wear one of my favourite vintage suits.  It’s a very dark navy windowpane suit with a 1933 Union tag, meaning that it was produced between 1933 and 1936.  It’s an old piece of clothing!  It’s made of a pretty interesting fabric, having red windowpanes and white stripes.  Because I wear a grey fedora with this outfit, I wore black captoe shoes to make it a bit more dressy than brown shoes (which you would then wear a brown fedora).

I bring a custom spearpoint in blue oxford into the mix, with a collar bar.  Nothing looks sharper than these subtle gentleman accessories that can still be worn in today’s styles.  I finish off the outfit with a charcoal overcoat (modern), which really helped since it got a little chilly and windy in the evening!

I just started using pomade and I highly recommend it! My hair held up even with the fedora! 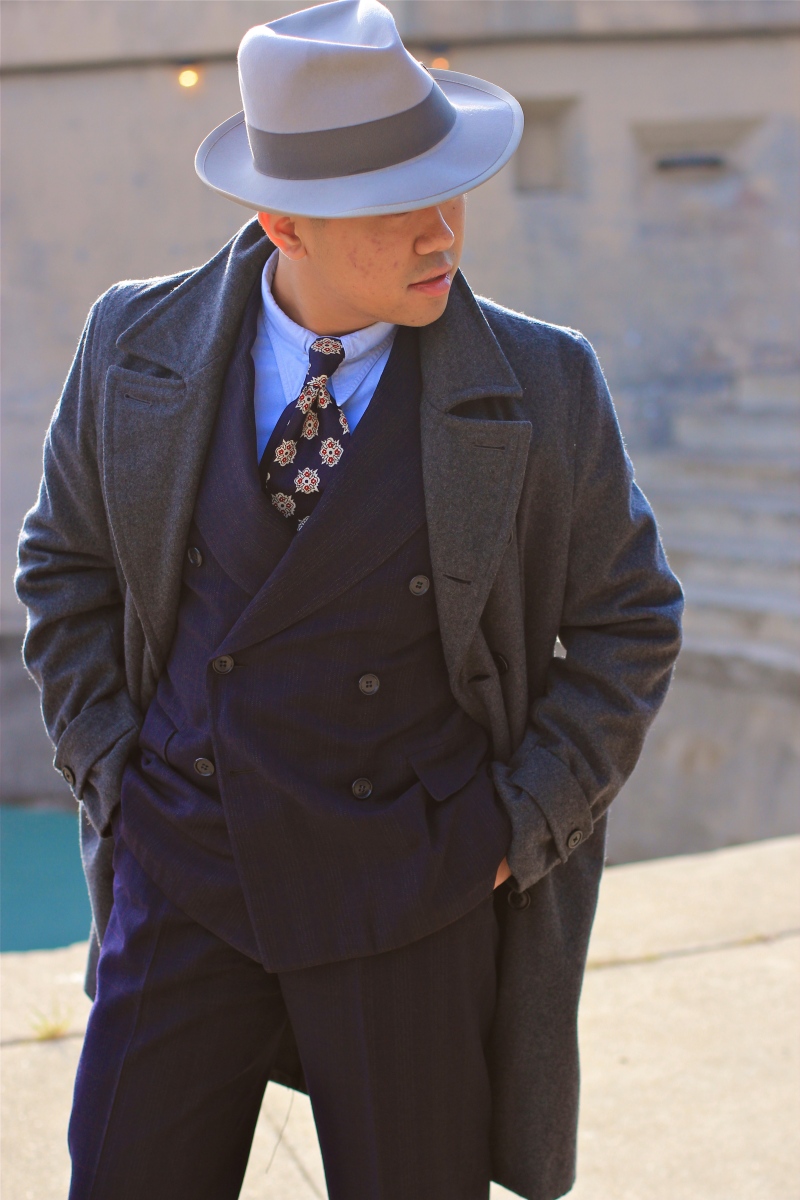 2.  “The Herringbone Kid” on Spencer 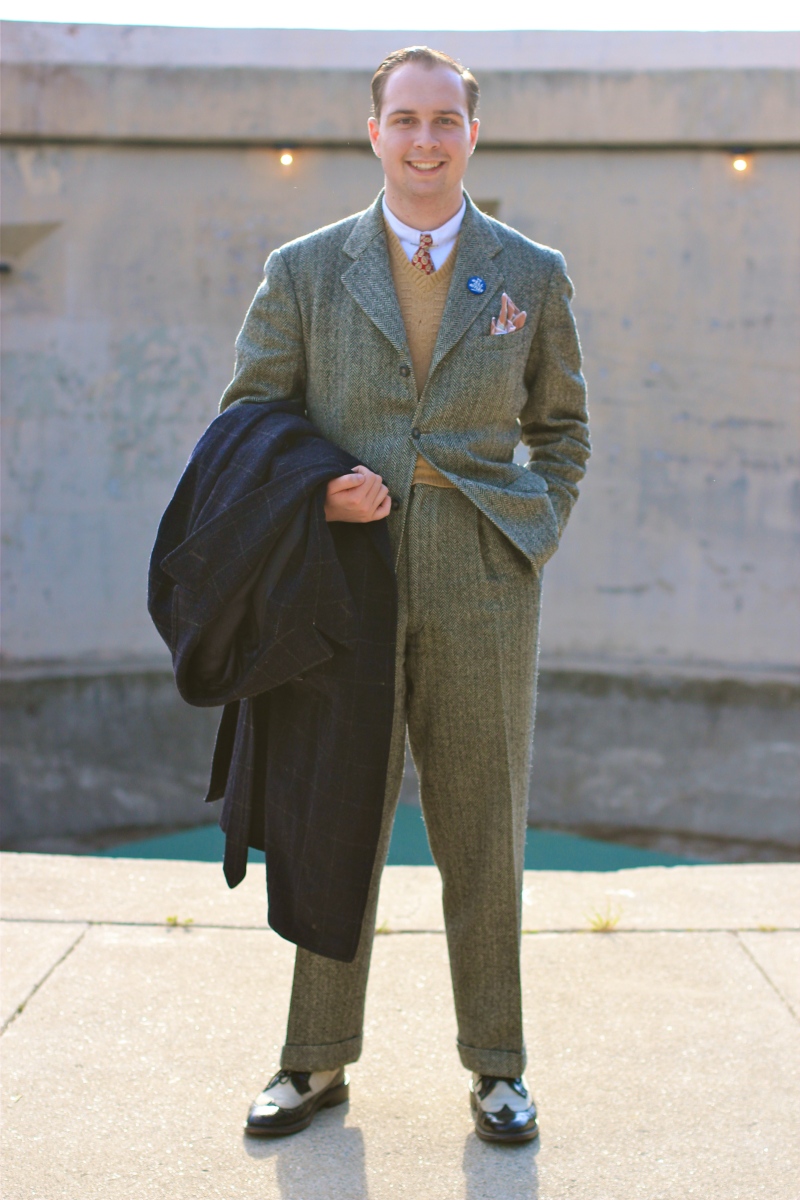 Spencer decided to do the opposite of my outfit; he wears a grey herringbone wool suit with a blue windowpane overcoat.  Great minds think similarly, don’t they?  To keep warm beneath the suit, Spencer wears a light brown sweater vest, which is accented by the light brown pocketsquare.  For pop, he wears a red geometric pattern necktie.  Patterns in the 1940’s definitely got wild.  Spencer definitely kept warm that night except for his head; always remember to wear a hat, gents! 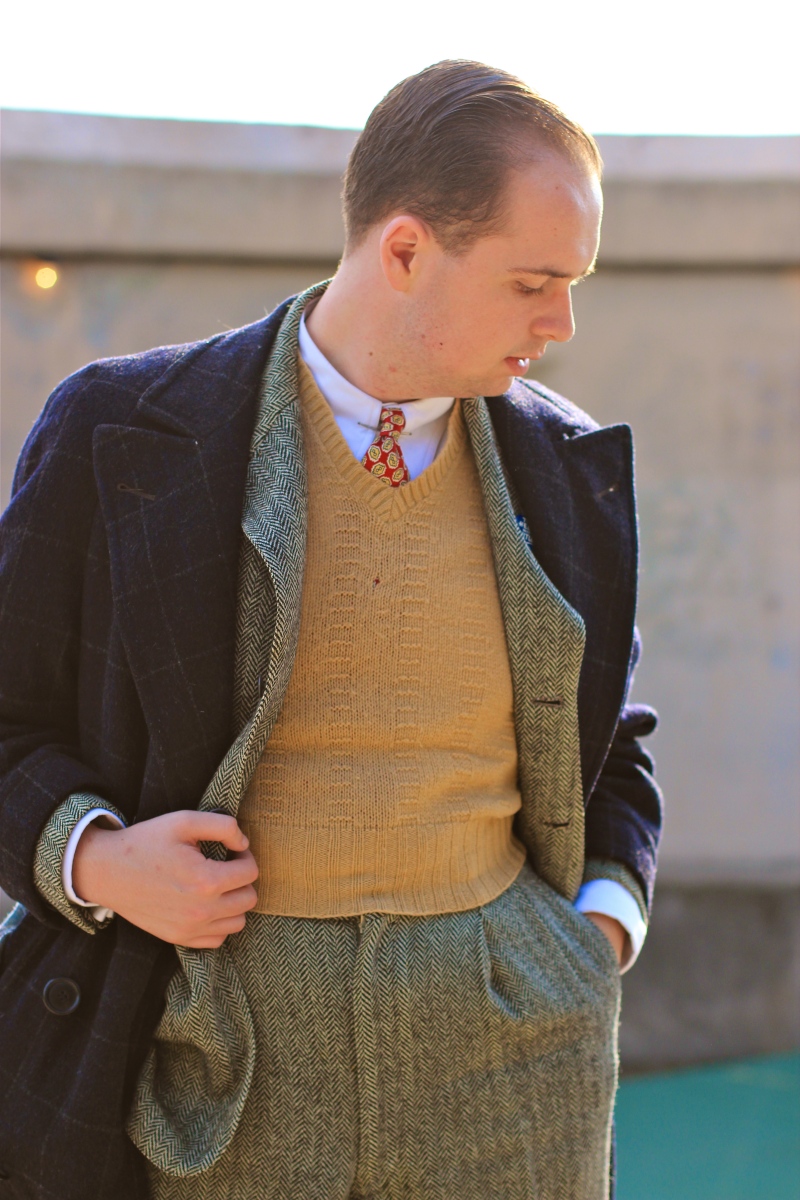 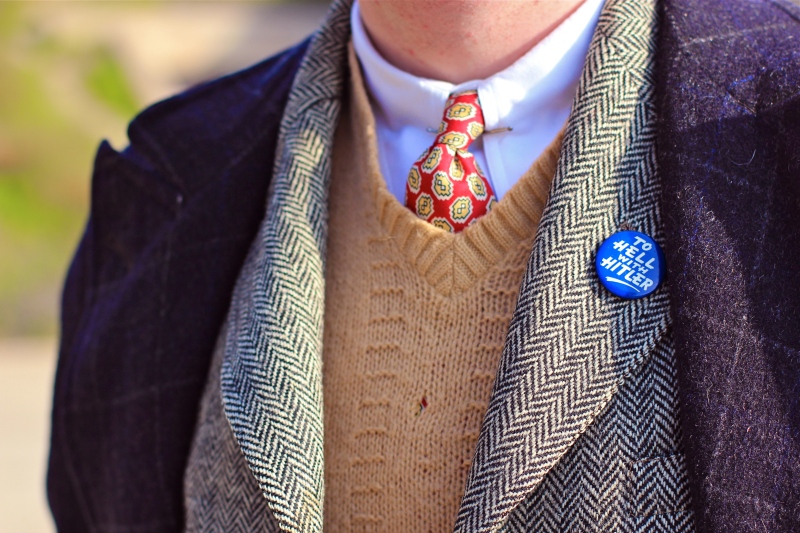 Lapel pins are sort of a lost art nowadays.  Spencer’s one is particularly relevant to the 40’s! 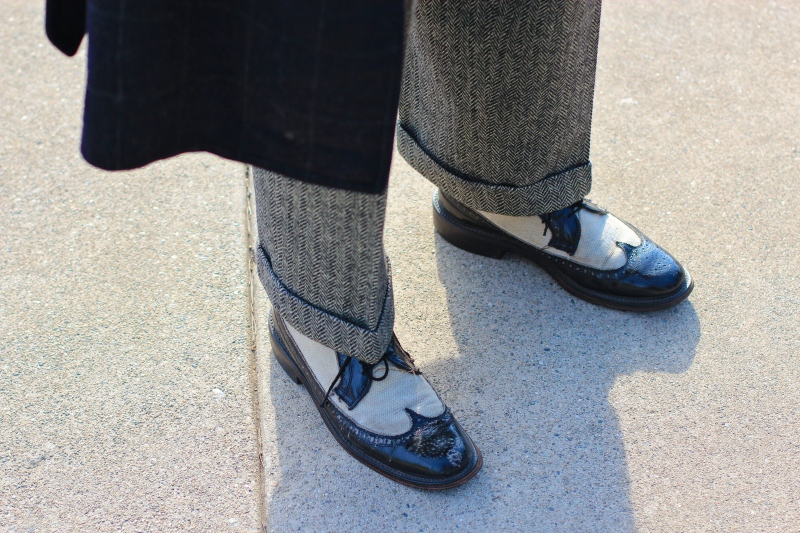 Here are some notable civilian outfits that we saw!

Cary Farnsworth can be seen at many vintage events with his iconic ice cream uniform and bicycle!  His treats are absolutely delightful, but let’s focus on the outfit.  If you look closely, his collar is a different shade from his shirt.  That’s because it’s a detachable collar! The fading really gives the age. 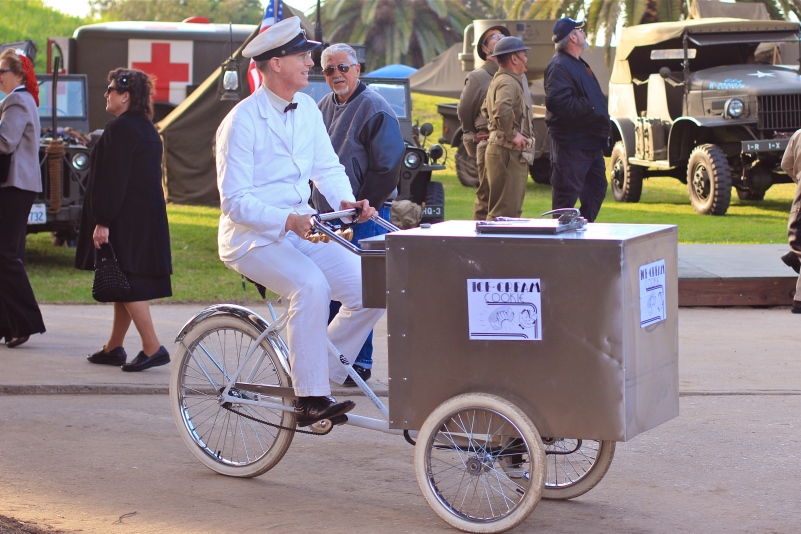 Not even these pin-up gals can resist Cary’s treats.

All I can say is that these gals were lovely.  Amazing dancers and quite the lookers! 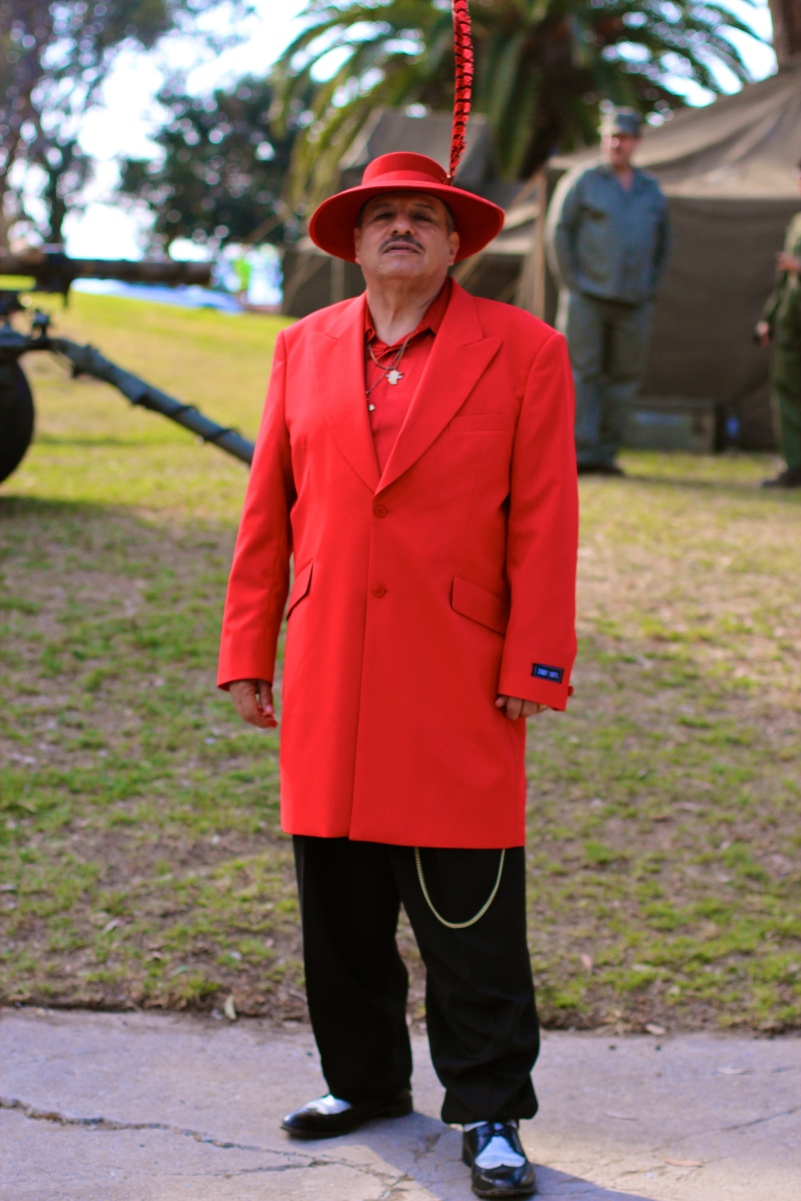 No one mess with this guy.  He’s rocking the zoot suit.  Not exactly flattering to a man’s body, but it’s definitely a look!

Rob is just so tall that I have to get his outfit in pieces.  Apparently windowpane is such a great look that he decided to wear his three piece as well to match us!

Do not wear the same pattern in your pocket square and in you tie.  Similar colors, but don’t match! Rob knows exactly what he’s doing. 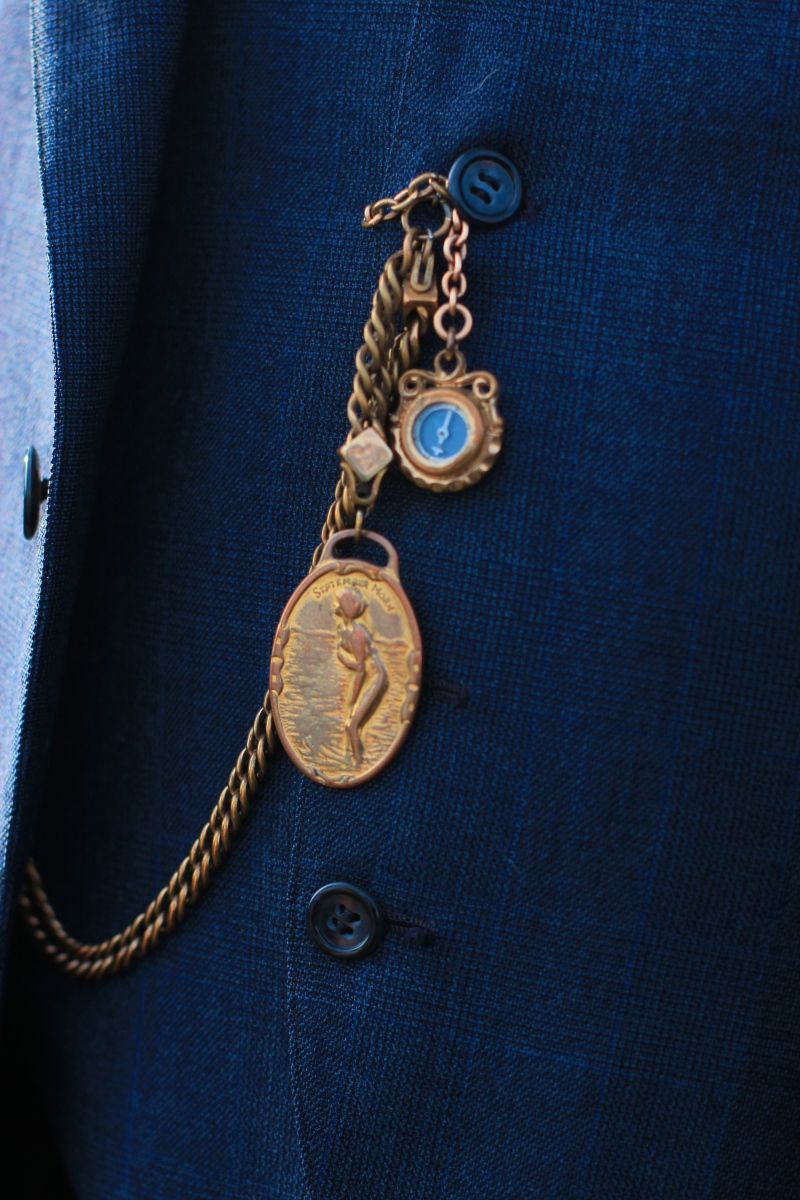 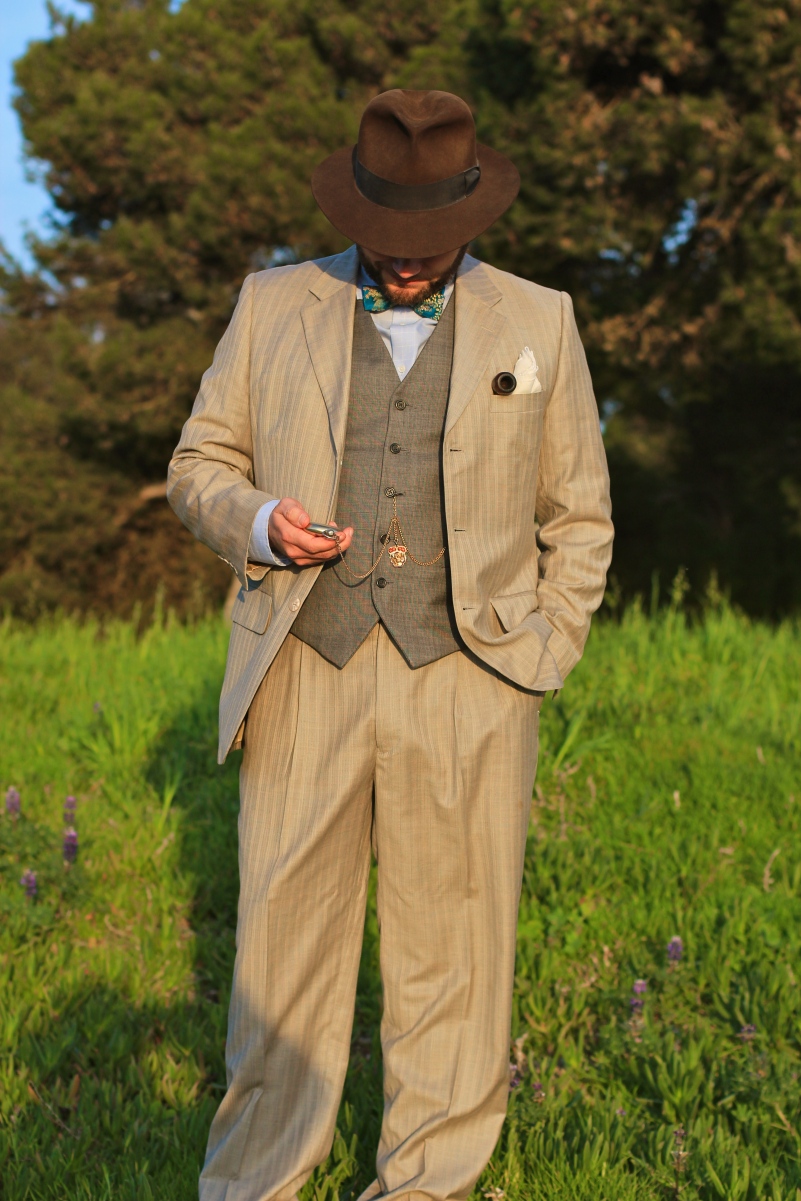 Three piece suits and a pocket watch are the best ways to be dandy.  This man decides to do a three piece with an odd-vest (not matching) to great effect!   I overheard him tell someone that his pocket watch is over a hundred years old! I highly doubt that, given the amazing condition, but it looks fantastic nonetheless.

This woman was just adorable.  She loved having her picture taken! 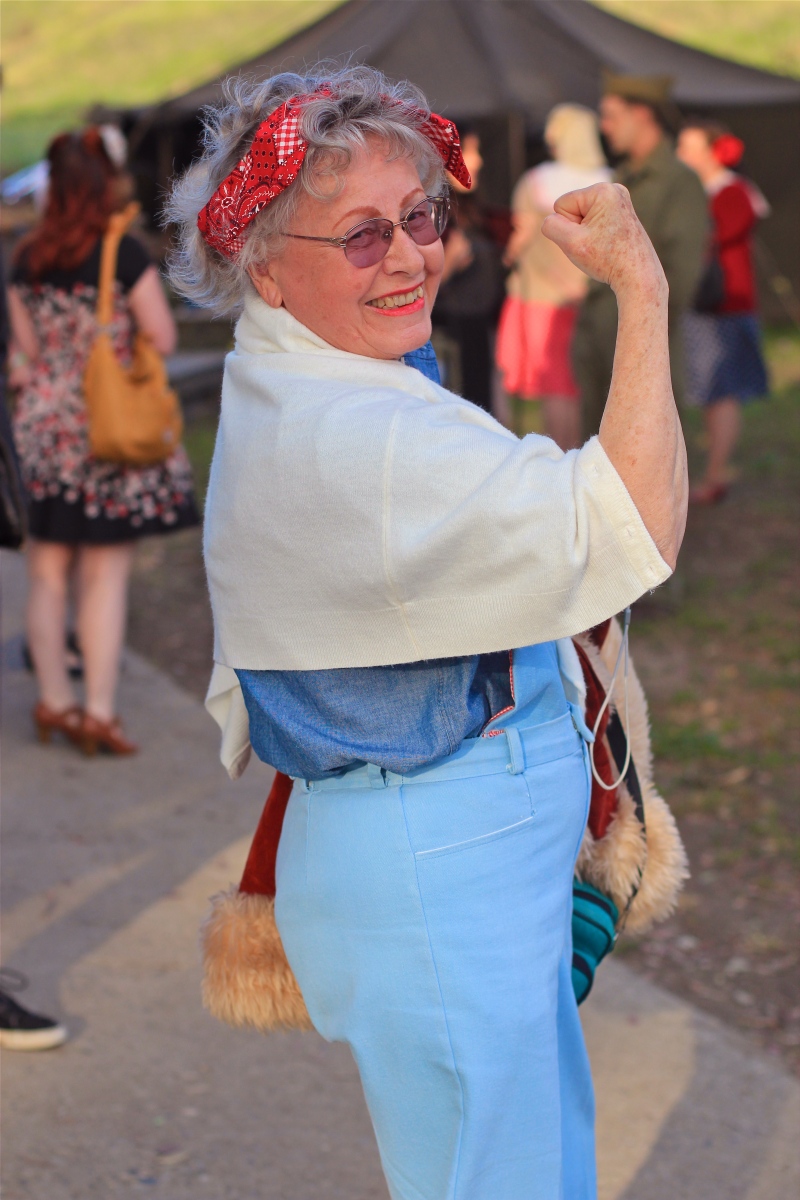 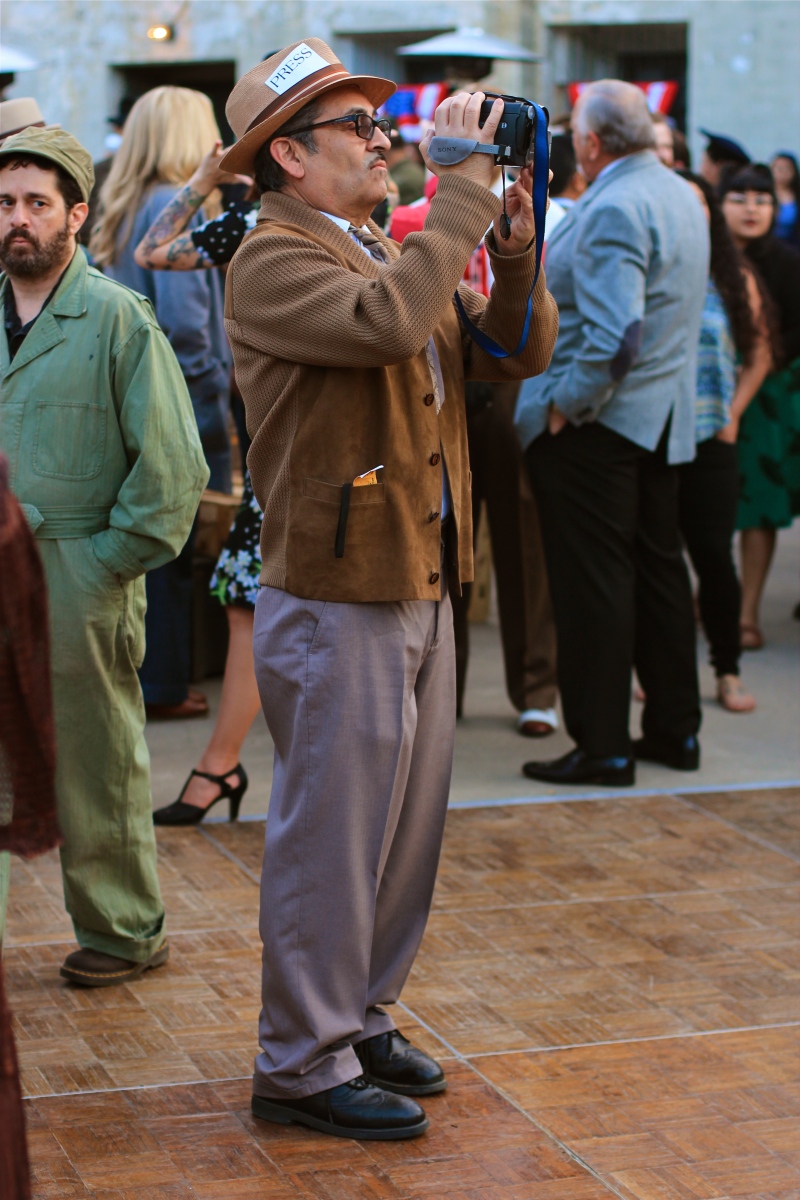 One official way to get into a restricted area is to be apart of the press.  I should’ve put a press paper in my own hat!

This woman really got the look down! “Love the hat!”

Blue pinstripe suit and blue tie.  The real pop is in those white shoes.

Nothing wrong with not dressing too flashy! I dig his vintage frames. 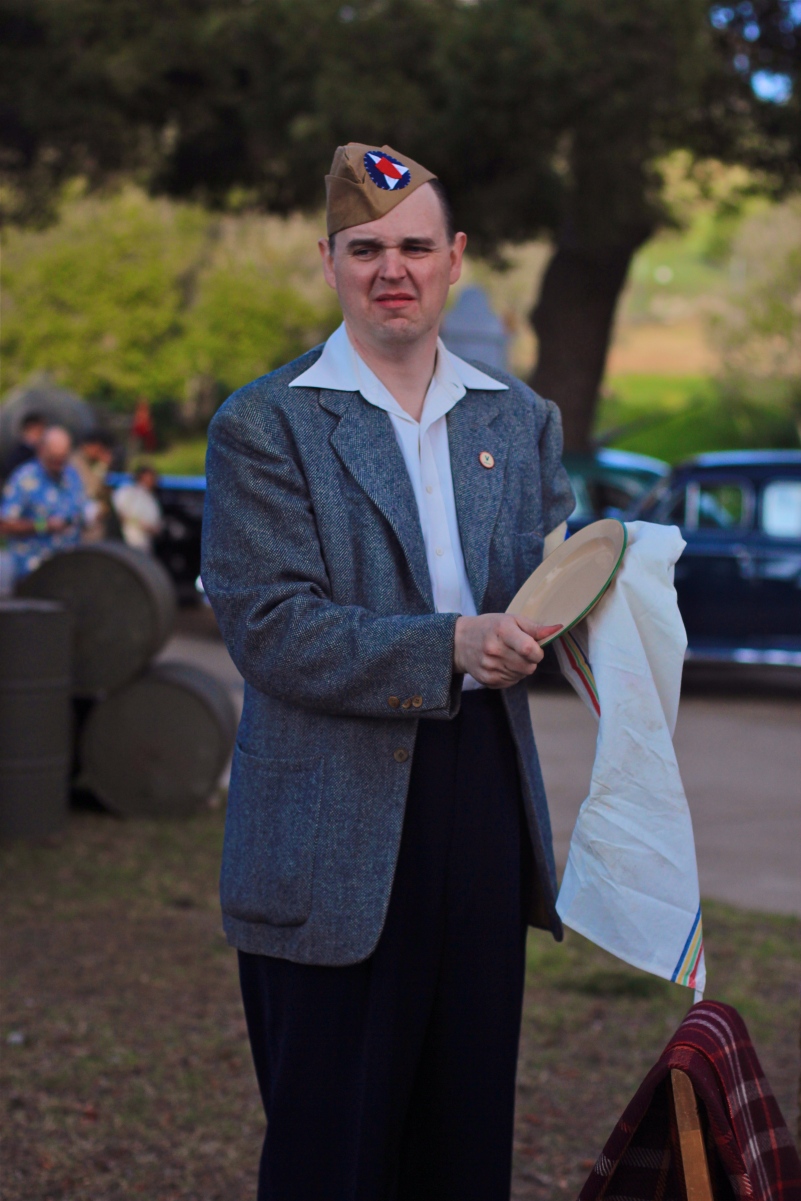 I’m sure volunteering at the army base was not as fun as you thought, Robert.  He wears a typical casual forties outfit, with his casual shirt under a nice sport coat.  The 70’s did not invent that look!

Check out the aged leather.  Like I’ve said before, nothing is more masculine and more insulated than a vintage leather jacket. 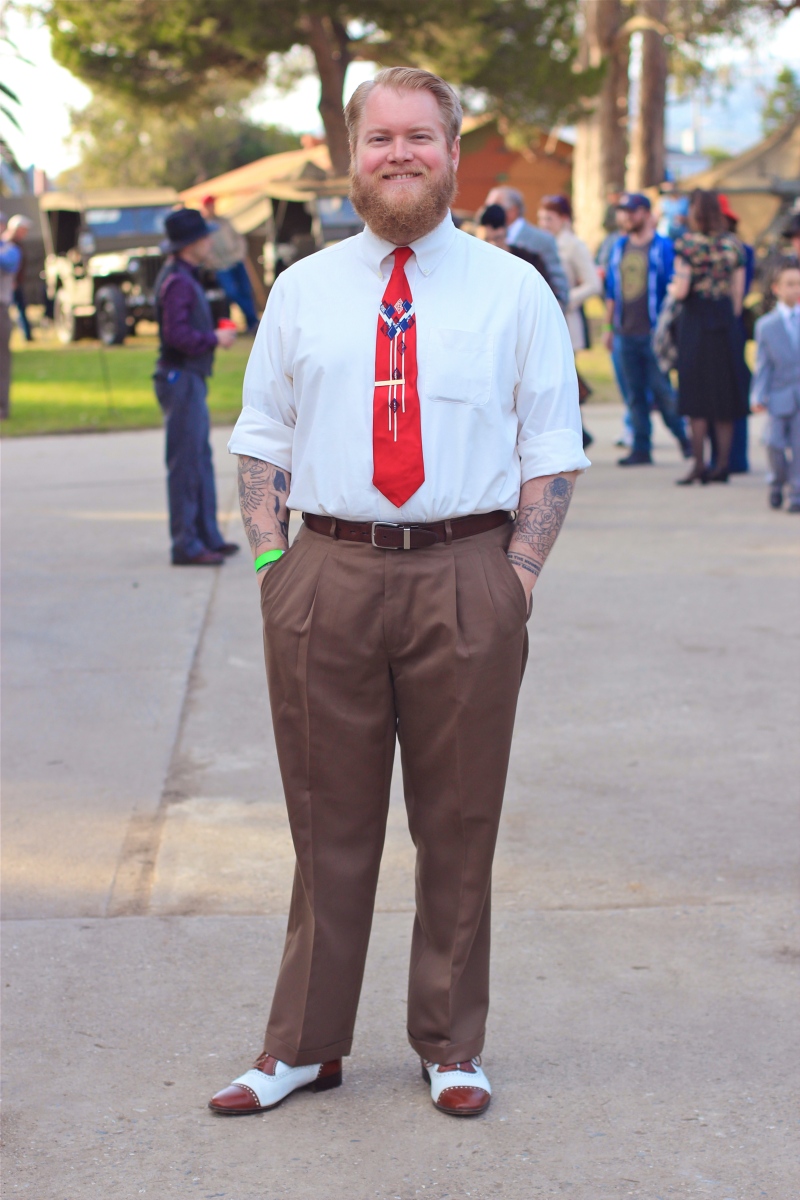 I loved this, even though it is more 1950’s than 40’s.  He rocks the spectator shoes and the short sleeve shirt.  Looks like he might know how to dance as well!

There were too many of these people there, so I snapped the ones I thought looked the best!

Aw, nothing better than a Navy Couple!

Here’s Tony on the dance floor, nimble as always! 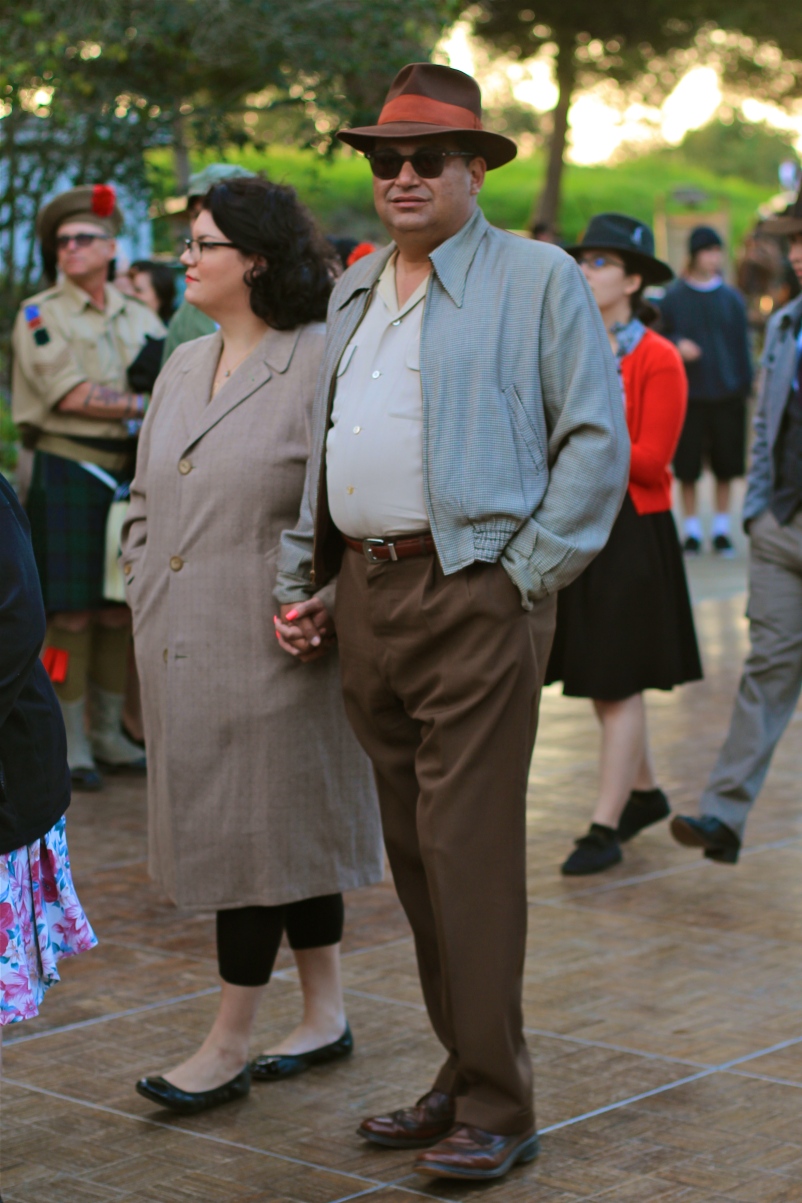 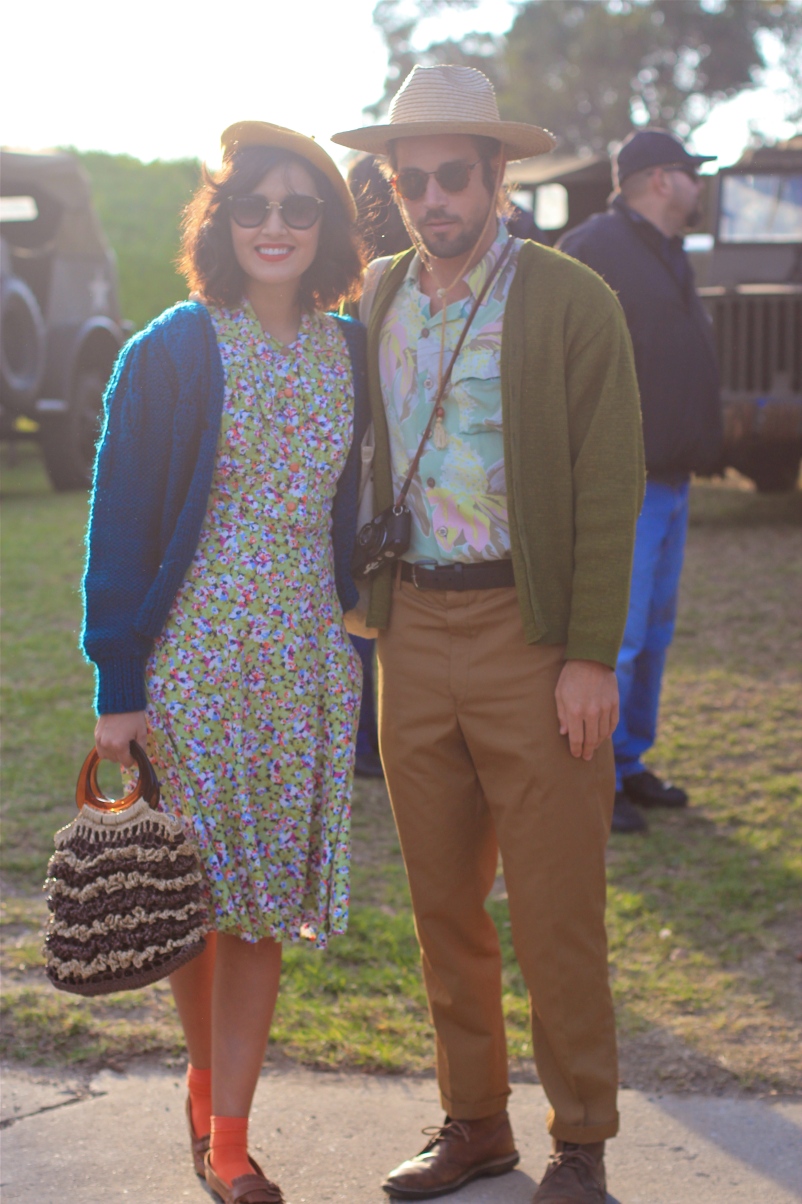 Can’t be a true LA event without some streetchic! That’s for you Tim. 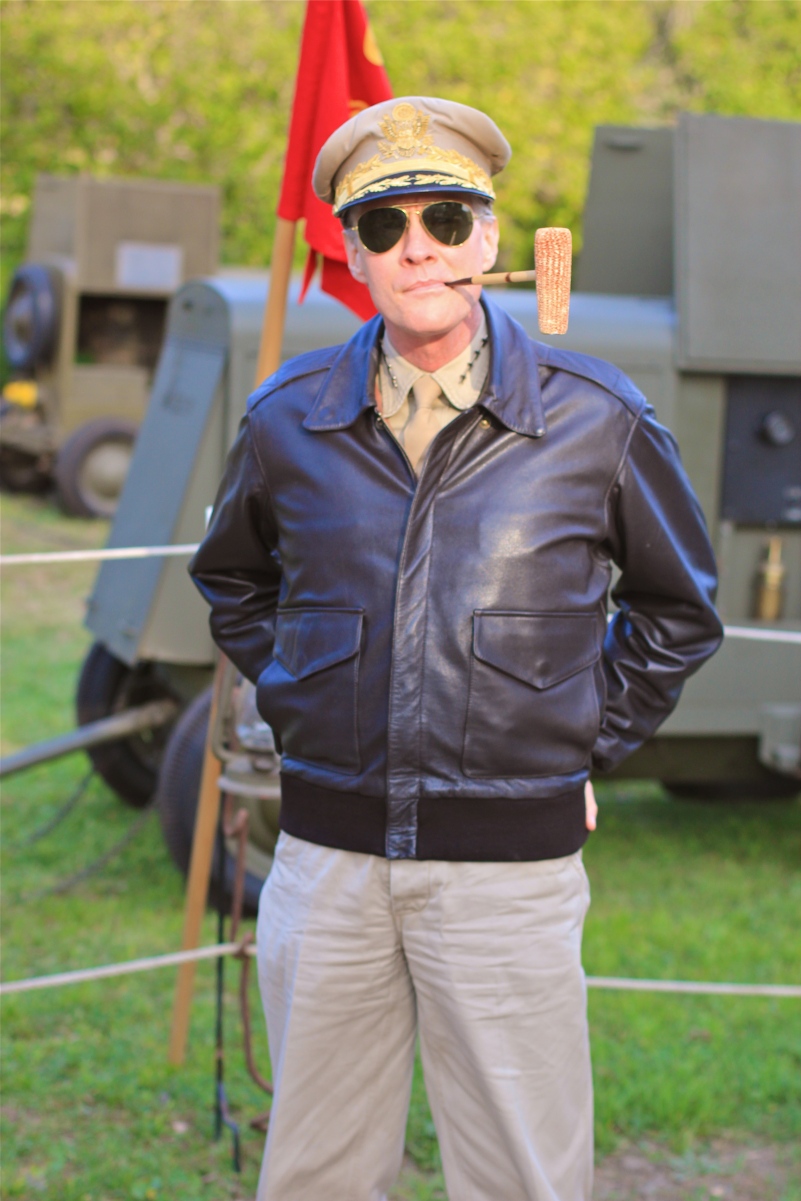 General MacArthur even paid a visit with his iconic corn-cob pipe. 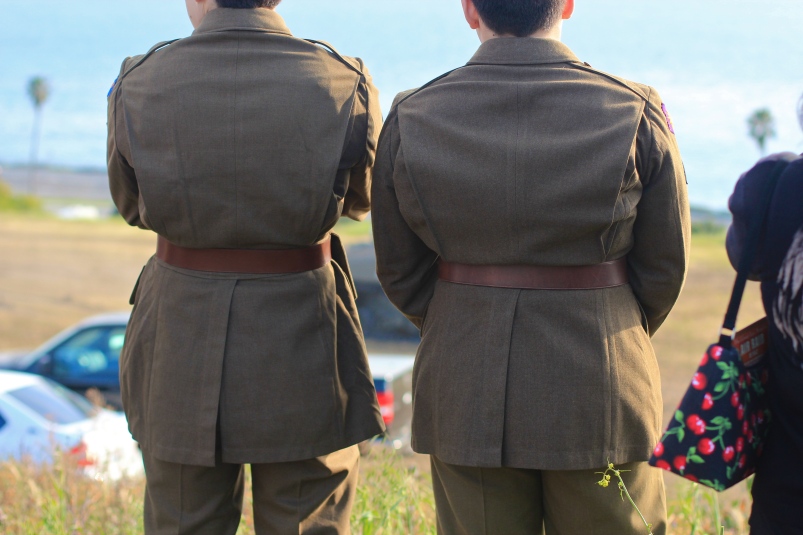 Belted and Bi-Swing backs were functional, as I’ve said before.  You can look good and protect the USA! 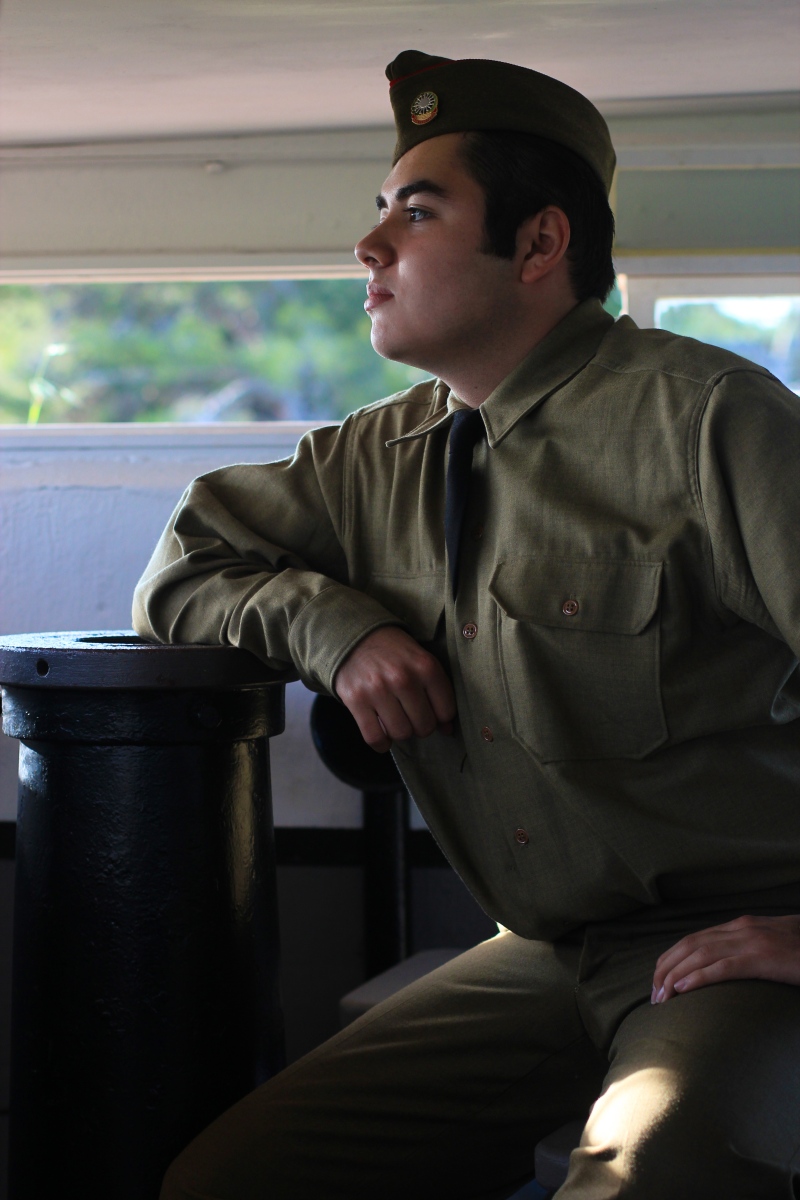 This man might be responsible for that weather balloon.  Or was it an enemy fighter?

Benny, owner of Reese’s Vintage Pieces, always has to stand out.  Check out his gorgeous military dress uniform. If you ever want some of the rarest vintage attire, please check him out! 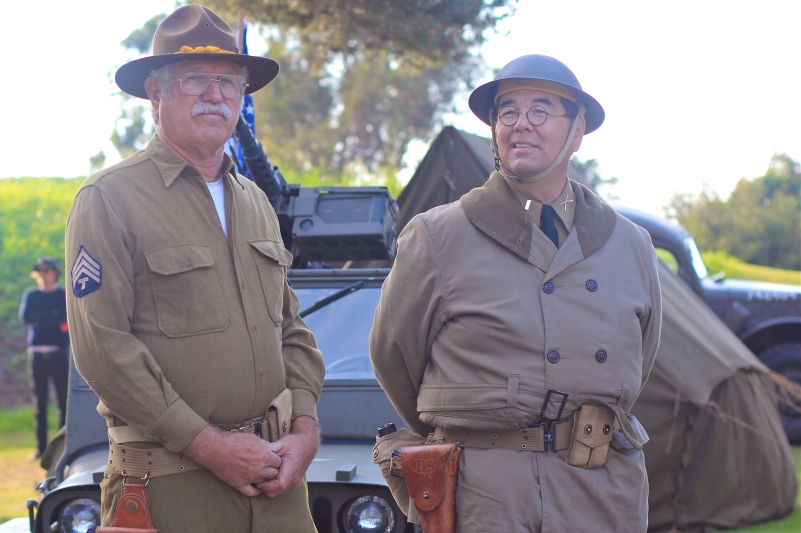 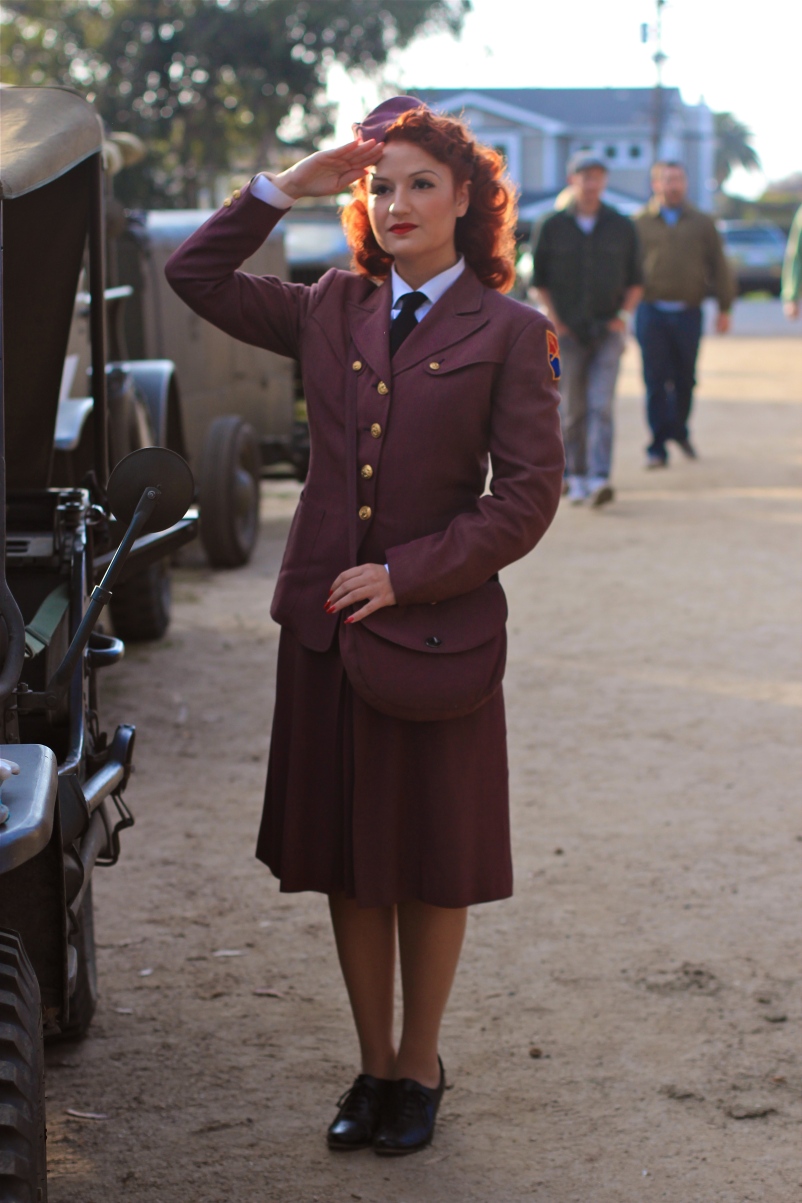 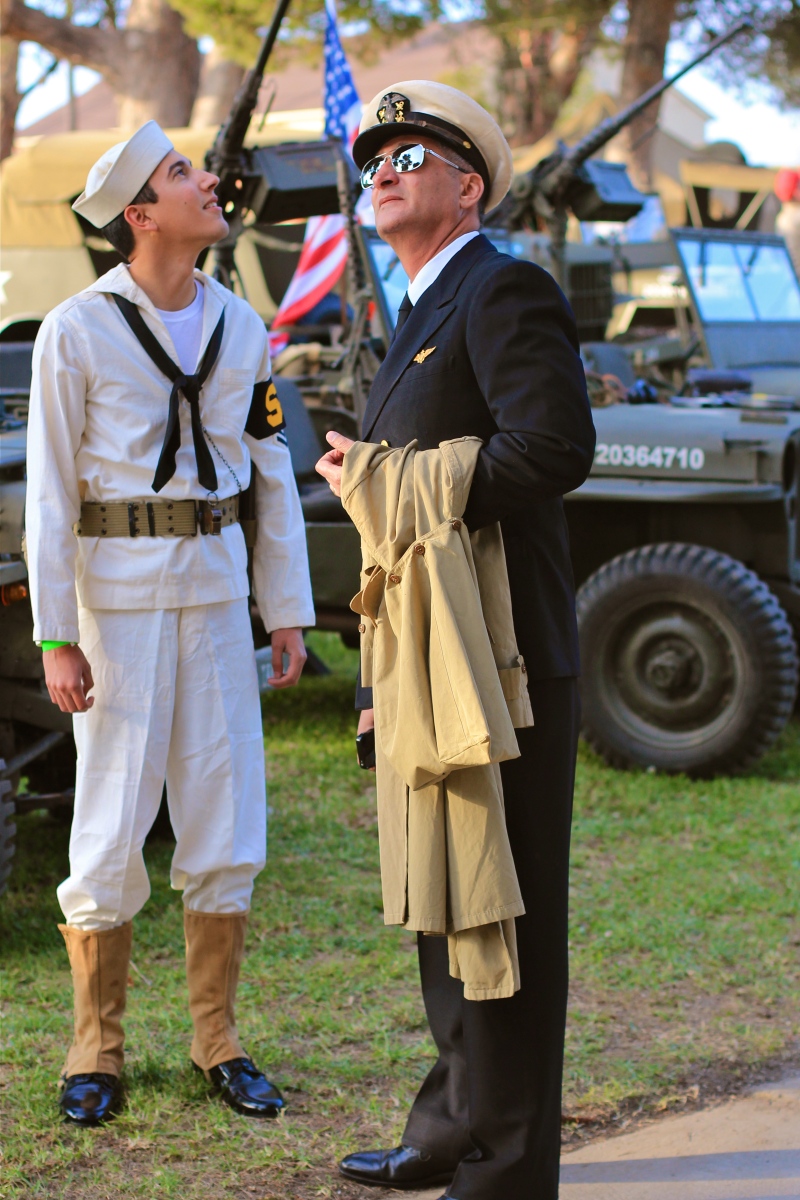 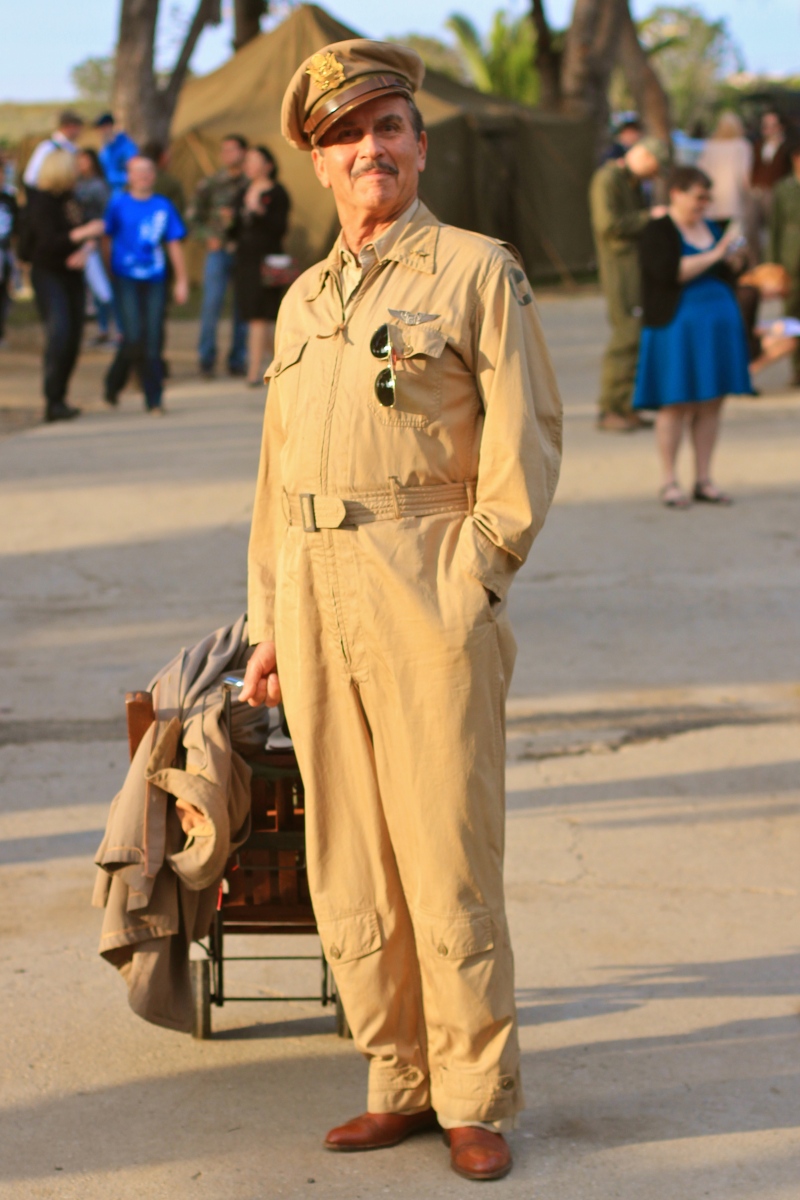 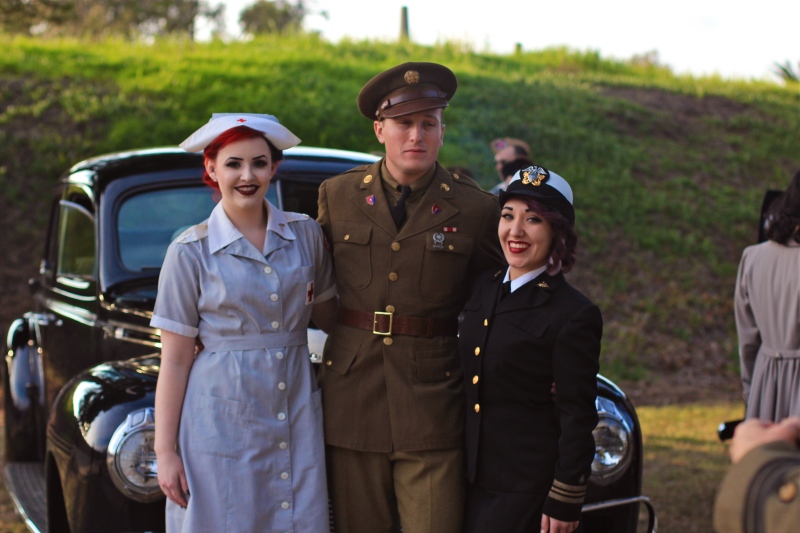 Overall, it was a great event filled with vintage and true patriotic citizens.  Most of all, I loved to see people get into the vintage spirit and create  an personal outfit, whether it was true vintage or not!

I hope you enjoyed reading and looking at the pictures as much as I did working on this.  Vintage style and fashion is an interest I hold very dear to my heart.

So would you wear any of these outfits?  Do you think it’s too costume-y?  Let us know below!